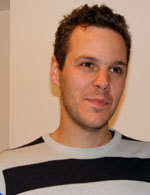 I make music and performance pieces. Raised in Adelaide, I now live in London. I've worked with groups such as Calefax, Ensemble Offspring, EXAUDI, Ives Ensemble, Nieuw Ensemble, Quatuor Diotima, Ricciotti Ensemble, Speak Percussion, Wespoke and soloistsClaire Edwardes, Juliet Fraser, Mark Knoop, Håkon Stene, Manuel Zurria and Stephane Ginsburgh. In 2017, my opera Electric Dreamswas produced by Kunstuniversität Graz in cooperation with ORF Musikprotokoll, as winner of the Johann Joseph Fux Opera Composition. In 2018, asamisimasa released a CD of my work on the all that dust label.

I've developed three projects: Letter Pieces, open score pieces combining physical action and music; Popular Contexts, which combine recognisable recordings with instrumental music; and a series of lecture-pieces addressing aesthetic issues. In 2011, dancer Shila Anaraki and I made A to Zzz, an hour-long work for the Letter Piece Company. And in 2017 Shila and I collaborated with Aisha Orazbayeva on another hour-long work, Lecture About Sad Music and Happy Dance.

I teach at University of Southampton, and co-direct Plus Minus with Mark Knoop and Vicky Wright. I've taught on Ensemble Nikel's 2017 Tzlil Meudcan Summer Course, and will teach on the 2018 Ensemble Offspring Hatched Academy. I've written articles, such as "The Automaton Approach" (published in MusikTexte) and "Where Are We Now?" (published in Tempo).