... it's filled with light and space. I never want audiences or players to go home wondering what it was all about, remembering little of the experience but bewilderment. 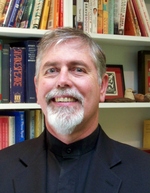 David Slater was born in Sydney. He began his musical studies on clarinet, but quickly turned his main attention to composition. Before beginning tertiary studies he had already completed a number of chamber, choral and orchestral works.

He studied composition with Peter Sculthorpe, Ross Edwards, Peter Platt and David Lumsdaine. His early work was awarded the Frank Hutchens Scholarship, the Ignaz Friedman Memorial Prize, the Sarah Makin Prize and a grant through the Alfred White Trust. He won a scholarship to Germany where he undertook further study with Brian Ferneyhough, Cristobal Halffter and Helmut Lachenmann.

On returning to Australia, Slater conducted concerts of contemporary music, and many new works were commissioned and premiered. His Theme and Variations for orchestra was selected for the inaugural ABC Young Composers' Summer School (now the Young Composers' Orchestral Forum). Elegy for chamber orchestra, commissioned by the Seymour Group, was conducted at its premiere by Stuart Challender, then Chief Conductor of the Sydney Symphony Orchestra who mentored Slater in conducting technique.

The decade from 1983 saw little new work of substance. It was during this time that he became passionate about music education, working extensively with young people. He moved to Canberra with his young family, becoming Director of Music at a large independent school, lecturing at the Canberra School of Music, and undertaking consultancies in music education. He composed and orchestrated music for theatre and television and began conducting regular seasons of 17th and 18th century repertoire as well as musical theatre.

In 1994 Slater returned to composition with renewed vigour after moving to the North Coast as Head of Music in a new independent college where he established and conducted the Coffs Harbour Regional Youth Orchestra and the North Coast Camerata. His work from this period includes songs, orchestral, choral and chamber works, including several commissions. The song cycle Antiphonies was nominated for the 2004 Paul Lowin Song Cycle Prize. The first of his Scherzos and Chorales was premiered to acclaim by the Nexas Saxophone Quartet and the second for string quartet followed soon after. Noontide's Night, Night's Morning - concerto for double bass section and orchestra was composed in response to the sudden death of his 4-year-old nephew and the passing of a student's grandfather who was a well-known jazz musician. This work's 3rd movement is a dark 'Elegie', but a joyous 'Scherzo & Chorale' with a jazz twist forms its 4th movement. A Breath of Wind on the Wings of Madness for baritone sax, double bass and percussion is also in this form and, more recently, the final movements of his Cello (Viola) Sonatina, Piano Trio and Piano Concerto.

His recent work includes a focus for young and solo performers. It ranges from pieces for youth orchestra (Exploratory Surgery and Scherzo and Chorale No.3) to pieces for harp (Efflorescences), violin (Pensive Moments), double bass (Etude), cello or viola (Sonatina), voice (Summer Haze), flute or clarinet (No Leaves To Blow) and bassoon (Lamentations) which have all been performed extensively, many for the NSW HSC.

After moving for a short period from Coffs Harbour to the Gold Coast, he now resides in Sydney's inner west. After eight years as Director of Music at one of Sydney's oldest independent girls' schools he now advises Australian groups on international music touring. He regularly conducts workshops and masterclasses throughout Australia, in Asia, and in Europe where he is on the faculty of several high-profile international music festivals. His most recent appointment is as Australia's Ambassador to the World Choir Council.

Of his work Slater says:

'Rhythmic complexity, melodic simplicity and resonant harmonies are fused in my music. Earlier, inevitably, it was heavily influenced by European approaches and a degree of cynicism, resulting in dark, chaotic sounds. Now it's filled with light and space. I never want audiences or players to go home wondering what it was all about, remembering little of the experience but bewilderment.'