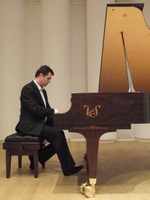 John Spence was born in Dungannon in Northern Ireland in 1965. He studied composition at the Sydney Conservatorium of Music, graduating in 1989. His teachers include Graham Hair, Martin Wesley Smith and Richard Vella. He also studied electronic music with Greg Schiemer. In 2011 he completed a research Master's degree in Creative Arts with a focus on electroacoustic music.

Spence has composed many large-scale orchestral works and his chamber music has been performed by some of Australia's leading musicians, including Michael Kieran Harvey, Kathryn Selby and David Miller. Spence has also recieved regular commissions resulting in a diverse output. In 2003 he composed an orchestral overture for the Viva la Gong festival. In 2005 he was commissioned to compose an orchestral piece for the 200th anniversary of Hans Christian Andersen, called The Money Box. Several of his chamber pieces have been recorded by artists including Mark Walton, Emma Knott and Scott Taggart.

In 2013, the BlueScope Youth Orchestra premiered one of his orchestral works in Venice at the venerated church of San Stae (Saint Eustachio) as part of their tour of Northern Italy. In 2014 Spence was awarded an Australia Council grant to compose a piece for the Anzac 100-year commemoration. The 23-minute solo piano piece was performed by Spence on Anzac day 2015. He also gave a number of performances as part of a regional tour of NSW. In February 2017 Spence completed an original soundtrack for the feature film Rip Tide starring Disney's Debby Ryan.

Spence was recently commisioned to write a string quartet as a memorial to those who perished in the Australian Bushfires of 2019/20. The work was named Dark Fire and was performed by members of the Steel City Strings in July of 2020. He currently teaches theory and composition at the Wollongong Conservatorium of Music.