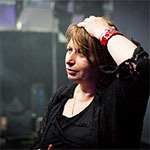 Josephine Truman is a singer, composer and performer whose focus is the voice and its ultimate potentials.

She began classical piano education at the age of five, continuing into her teens, but even before then she was an enthusiastic improviser, creating narrative-driven improvisations on the piano and mimicking the sounds around her - birds in the local environment and opera singers on her father's records.

Truman studied art at Hornsby Technical College and Alexander Mackey College of Fine Arts (now COFA), and simultaneaously the voice and improvisation, developing a repertoire of extended and microtonal vocal techniques, and exploring the possibilities of vocal microtonality. She collaborated with improvisers such as Jon Rose (and the Relative Band), Jim Denley and Sandy Evans. In 1993 Truman received a Special Purpose Award from the Australia Council's Music Board. In 1985, she was awarded an International Study grant from the Music Board to continue her study and performance of improvisation in England and Holland.

For two years, she was based in London, studying voice with David Mason and working with British improvisers such as Phil Minton, Maggie Nicols and Sylvia Hallet. Later, she moved to Amsterdam, Holland, and became involved with European new music, jazz and improvisation. She studied jazz vocals and also counterpoint with Misha Mengelberg at the Sweelinck Conservatorium. Following this, she was guest student for one year at the Royal Conservatorium of Den Haag, studying composition with Dick Rayjmakers and Gilius Van Bergeijk. During this time she also worked with John Cage on his Song Books, this version being broadcast on VPRO radio.

Truman composed and performed work for various ensembles and festivals, including Ways and Meanings (The Eareye Seeshears). Truman was commissioned to record a CD Sdreamings, by Staalplaat records, Amsterdam, which included collaborations with composer Jean Schwarz and percussionist Bart Fermie.

Truman found a sympathetic medium in radio for her forays into sound and music as well as writing. Radio commissions include Cell Songs (ABC Classic FM), the Horspiel Sdreamings (AudioAkustisches Kunst,WDR3 Koln), The Mirrored Cry, The House In the Sky (a suite of her poetry and prose with music) for The Listening Room (ABC Classic FM), Transparent Messenger (The Europeans program on ABC Radio National) and Deprem (Radio Eye, ABC Radio National), and the mini-series Extreme Throats (ABC Classic FM) based on her MMus research. Several of her works for voice have been broadcast on the ABC and local radio, including Singing In Tongues, Keening Raga, Flock, Call and Response and Sdreamings.

In 1993 Truman was awarded a live-in stipend at the Akademie Schloss Solitude in Stuttgart, Germany. During her residency, she conceived and directed her work A Bite In Time - a three-part sound/music installation multimedia work. She returned to Australia in 1995 and completed her BA (Communications) at UTS in 1998.

Truman graduated with a Master of Music with High Distinction in Composition at the Sydney Conservatorium of Music (University fo Sydney), having studied composition with Bill Motzing and with Richard Toop as thesis supervisor. Her thesis, "EXTREME THROATS; Extended Vocal Techniques in Contemporary Music of the 20th & 21st Centuries" is housed in the Sydney Conservatorium of Music Library. She travelled to New York on PRSS grant form the Sydney Con and performed at Phil Niblock's Experimental Intermedia festival, and conducted thesis research.

In Otober 2012 Truman's WDR radiophonic commission The Bridge to Otherness (50 mins) was broadcast on from WDR3 AudioAkustisches Kunst. This work draws on themes and narratives of 'Self/Other/Place' and focussed on the region of the Blue Mountains . It features commentary and interviews of locals, including Gundungarra Tribal elders, anthropologists, writers and artists and immigrants to the mountains, as well as native birdsong and other local environmental sounds recorded by Truman.

Truman was commissioned by the curator of MONA FOMA, Brian Ritchie to compose and perform two works at the MONA FOMA 2013 festival in Hobart. In collaboration with Lennie Marks (electric guitar) and Daniel Grinvalds (electronics) as a singer and pianist )also working with electronics on stage) she performed a 30-minute work Dream Slash Nightmare at the Princes Wharf in Hobart. The piece Elements (inspired by the themes of earth, fire air and water) was performed as part of the Morning Meditation series at the St Mary's Cathedral Centre in Hobart, followed by a vocal workshop at the Bahai Centre.

In 2014 Truman received a new work grant from the Australia Council of the Arts to collaborate, as librettist, co-composer and singer, on the creation of a chamber opera for solo voice woodwind and strings with the Icelandic composer Hildigunnur Runnardottir. The composers are hoping the work can be performed in Iceland and/or Australia in the near future.

In 2011, recognising there was a need for a supportive and unfiying community online forum about fire threat in the Blue Mountains where she lives, Truman started the Facebook group 'Blue Mountains Firewatch'. It now has over 5000 members.

Truman integrates her drawing and painting skills into her multimedia work in an ongoing exploration of the relationship between visual and sound arts. She conducts vocal workshops, teaches piano and voice privately, and drawing and painting at Sydney and regional community colleges. She is actively involved with community choirs and classical and contemporary performance and was the musical director for the Brook Theatres production of Louis Nowra's play Cosi, which was recently performed at the Mechanics Institute in Lawson. and is a regular performer in the Blue Mountains SoundBites series of experimental musc .