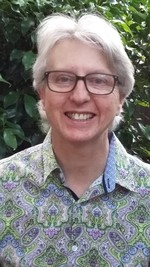 Steve Wood (b. 1959, Sydney) is a graduate of the Sydney Conservatorium of Music where he studied composition with Bozidar Kos, Richard Vella, Martin Wesley-Smith and Graham Hair. He was the co-winner of the Raymond Hanson Memorial Prize for composition (1983) and his paper, 'The Use of Humour in Music', was published in New Music Articles 5, edited by Rainer Linz and Richard Vella (1987).

Wood has worked as composer, musical director and keyboard player in a broad range of disciplines including music theatre, dance and film. He has written music for the plays The Monk (1996) and Two weeks with the Queen (1998). His rock opera, Brothers of the Head (an adaptation of a Brian Aldiss's book) has been staged twice (1996 & 1997). In 2021 his Musical The Pyjama Girl (book by Stephen Goldrick) premiered in a working brewery in Wollongong.

His music is often characterised by a sense of rhythmic process and harmonic propulsion.

Steve Wood writes: "I think that most people have an idea of what constitutes 'good' music. It is that music which speaks to them emotionally, intellectually, or both. It is something that gets in your head and makes you want to listen again. That is what I get out of music and what I always try to achieve when I write it."

Three works which are representative of his approach are Chambermaids Come Out To Play (2006) for wind quintet, Crustacean Rejoinder (1997) for chamber ensemble and choir, and Tea and Tiny Cakes (1988) for solo guitar (electric or acoustic).

Steve Wood lives in Sydney with his wife and son.