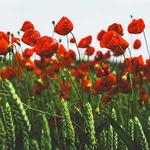 At the Eleventh Hour : Commemorating 100 years since the end of World War I

On the centenary of Armistice Day, the Sydney Symphony Fellows and the Sydney Conservatorium of Music present a program of works by composers from major powers of World War I, each touched by the war in their own way.

Rudi Stephan’s Music for 7 String Instruments is a work of young genius, full of drama and passion, completed just a few years before his death on the Galician front in 1915 aged 28. Edgar Bainton’s Three Pieces for Orchestra were written during his internment at Rehleben for the duration of World War I. After the war he went on to become Head of the Sydney Conservatorium and a major figure in Australian musical life. George Butterworth died in the Battle of the Somme in 1916, aged 31. Ravel served as a driver on the Verdun front, and his Tombeau de Couperin was dedicated to friends lost in the war. Myaskovsky was wounded and suffered shell shock on the Austrian front and completed his Two Pieces for String Orchestra years later in a politically turbulent Russia. Elgar’s gorgeous Sospiri (“Sighs”) was written as storm clouds gathered in 1914.

Presented in association with the Sydney Conservatorium of Music.