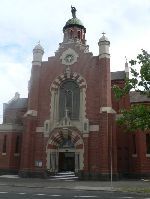 Christopher Willcock, a Jesuit priest ordained in 1977, is a leading Catholic composer of liturgical music; he also has a wide range of concert works to his credit.  He studied piano at the Sydney Conservatorium of Music and composition with Peter Sculthorpe, and in 1987 he completed a doctorate in liturgical and sacramental theology in Paris.  He now teaches at the United Faculty of Theology in Melbourne.  Among his published liturgical music are two volumes of psalm settings and a collection of music for funeral rites.  In 1999 he was commissioned to write a piece, entitled Gospel Bestiary, which the Tallis Scholars performed during an Australian tour the following year and which was subsequently sung in Great Britain.  He won the 2006 Classical Music Award for Choral or Vocal Work of the Year with Southern Star, a cycle of nine Christmas carols composed in collaboration with the author and cartoonist Michael Leunig.