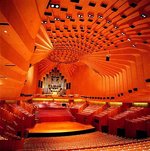 The Australian World Orchestra will celebrate its 5-year anniversary in 2016 with two electrifying concerts conducted by internationally acclaimed Australian conductors Alexander Briger and Stanley Dodds. The programme features works from Ravel, Tchaikovsky and the world premiere of Australian composer Elena Kats-Chernin’s Concerto for 8 double basses The Witching Hour. See the Sydney Opera House website for details of the second concert on Thursday 29 September.

This year we are offering a Platinum ticket to the opening night concert which includes entry to the post concert party - we would love you to join us.

Following on from the success of their 2015 season under the Berlin Philharmonic Orchestra’s Music Director, and arguably one of the greatest conductors alive, Sir Simon Rattle, and an unprecedented international tour to India under the legendary maestro, Zubin Mehta; 94 of Australia’s finest musicians from home and around the world who hail from the world’s greatest orchestras will come together again on stage at the Sydney Opera House to present two electrifying concerts over two nights in September 2016.

Australian audiences have become accustomed to the incredibly high standard and electricity of the AWO since the orchestra’s premiere performances in 2011, and these concerts are sure to continue this tradition. Undoubtedly a concert highlight in the 2016 Australian music calendar.

Further information for this event is available online at the event's website or by email to bookings@sydneyoperahouse.com