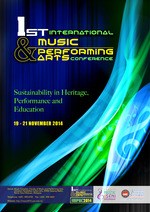 Creative Journeys will feature perfomances of the compositions Song of Love and Lament and Into One for viola and piano, by John Sharpley, performed by Katia Tiutiunnik (viola) and John Sharpley (piano). Song of Love and Lament is based on an aria from Sharpley’s critically acclaimed opera, Fences, which was premiered on the first and second days of Hari Raya/’Eid al-Fitri, 2012, at the Lee Foundation Theatre, in the Nanyang Academy of Fine Arts, Singapore. The subject matter of Fences revolves around two star crossed lovers—a Malay woman and a Chinese man—whose romance unfolds in the tumultous 1960’s, throughout the period wherein Singapore merged with, and subsequently separated, from Malaysia. Into One, the third piece from Sharpley’s Four Pieces for Viola and Piano is a strikingly orignal work exploring the infinite dimensions of overtones. This presentation will also feature performances of two collaborative works composed by Tiutiunnik and Ross Carey (Malaysia/New Zealand), published in their book, Creative Journeys: When Composers Collaborate (UiTM Press, 2013). The first of these compositions, Belye Nochi for violin and piano, draws upon the musical traditions of Russia and the Middle East, being born out of an original viola solo inspired by Tiutiunnik’s experiences of the “White Nights” in Saint-Petersburg. Belye Nochi also contains references to the short story, Belye Nochi, by Dostoyevsky (1848). The second collaborative work, Una Preghiera, encompasses melodic material based on pentatonic scales of the Far East and Near Eastern maqamāt, giving rise to an intercultural synthesis of musical traditions.

Further information for this event is available online at the event's website or by phone on (60-5) 450 6702 or by email to clare@fmsp.upsi.edu.my