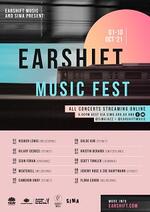 Tickets: This is a free event

SIMA and Earshift Music are proud to present the fourth edition of the Earshift Music Festival, 1st - 10th of October. The ten-day marathon online music festival will air at 8pm AEST each evening, streamed live on facebook, youtube and SIMA’s website. The festival is curated and hosted by Earshift Music artistic director, Jeremy Rose, who will do live artist chats with each performer following their set.

The Earshift Music Festival continues the evolution of online festivals spawned since the pandemic, delivering an array of exciting live streamed performances featuring artists from across Australia and abroad. The festival celebrates the resilience of musicians through these challenging times with performances from the intimacy of artists’ homes.

Festival highlights including Kristin Berardi, Scott Tinkler and Sean Foran showcase the diversity of musical practice amid varying geographic locations, from Brisbane, Bruny Island (TAS) and Lucerne Switzerland. Emerging talents such as drummer Chloe Kim and guitarist Hilary Geddes highlight different perspectives on their solo performances and new concepts. Meatshell, a Melbourne duo featuring bassist Helen Svoboda and saxophonist Andrew Saragossi, represent a new wave of exciting improvisers, with their mix of folk, improvisation and jazz. Guitarist Cameron Undy will also present his individual rhythmic concepts in a solo set. The Rest Is Silence bring their exciting mix of indie-rock, electronica and country. Trumpeter Reuben Lewis will explore an electronic sound world with his innovative use of effects and pedals. Jeremy Rose will launch his new video series Face to Face and chat to SIMA artistic director Zoe Hauptmann.

“If there’s a silver lining of the pandemic, it has been that we are even more driven to find new avenues of connecting with audiences and championing creative music,” says Earshift Music artistic director Jeremy Rose. “This festival is a great opportunity for us to make the most of our current situation.” “With live performances across Australia currently being impacted, SIMA are excited to be supporting this online festival and all the artists involved,” says SIMA artistic director Zoe Hauptmann. “We can’t wait to see this exciting range of artists’ performances!”

Each live stream will be hosted by Jeremy Rose, and include an artist chat following each performance

Reuben Lewis is a trumpeter, composer, producer, improviser and electronic musician specialising in cross-genre, cross-cultural and multidisciplinary collaboration. With a sound that is both singular and eclectic he is widely known for his strong artistic vision and ability to bring people together. Reuben’s critically acclaimed album with his project I Hold the Lion’s Paw, is a melange of afro-beat and psychedelic jazz, with echoes of Jon Hassell.

Originally from Griffith NSW, guitarist and composer Hilary Geddes is now based in Sydney has become a key member on the Australian scene after receiving the Jann Rutherford memorial award back in 2019. Her acclaimed debut album, Parkside is out now through ABC Music. Hilary’s playing effortlessly straddles influences from blues, rock and jazz, with a distinctive echo of Bill Frisell.

Sunday 3rd - Sean Foran
Sean Foran is a Brisbane based award winning pianist/composer and bandleader of Trichotomy. Foran’s recent album Haven, as part of Berardi Foran Karlen has been released to acclaim from pundits around the world.

Tuesday 5th -  Cameron Undy
Bassist, composer and guitarist Cameron Undy takes you on a journey into a world of shadow rhythms in a performance of new works inspired by the African Diaspora, giving a glimpse of the ‘ghost frequencies’ that guide the musical mind and body. Undy celebrated the release of his self-produced beats album Bloodshot, earlier this year.

Wednesday 6th - Chloe Kim
Seoul-born Chloe Kim is (김예지) is an improvising drummer at the forefront of a new wave of creative jazz music in Sydney. Chloe performs in her own exciting style, a combination of her jazz, rock and Korean heritage, informed through her studies with Simon Barker, and can be heard on her two solo albums and a range of collaborations including her co-led group Holopeak and their debut album Summit Over. Chloe was recently a featured soloist in the Sydney Festival production of Disruption! The Voice of Drums, with Jeremy Rose and the Earshift Orchestra.

Currently based in Lucerne Switzerland, Kristin Berardi is one of Australia’s most treasured jazz vocalists. Kristin’s two recent Earshift Music releases include Haven, and Our Songs, Not Songs, a stunning duo album with bassist Sam Anning.

Scott Tinkler has a rare talent that marks him as one of the world’s most distinctive trumpet voices and the praise heaped upon him is deserved. He is an innovator and virtuoso that has inspired a generation of musicians in Australia through his outspoken larrikinism and humour as much as his playing. Recorded live from his beautiful handmade studio in Bruny Island, Tasmania.

Sunday 10th – The Rest Is Silence

Bringing together four of Melbourne’s most prodigal young jazz artists, featuring siblings Flora Carbo (alto saxophone) and Theo Carbo (guitar) alongside long-time friends Isaac Gunnoo (double bass) and Maddison Carter (drums), their music is a breath of fresh air, fearlessly moving between genres to create a soundtrack to the multiplicity of our modern lives. Their debut album A Short Film, explores melodically driven compositions against a backdrop of indie-rock, country, and electronica. The Rest is Silence is a collective, with all members contributing compositions and directing the ensemble sound. The two deeply connected halves of the quartet unite to create unique and trusting musical explorations. They are influenced by artists as diverse as Carlo Gesualdo, Bill Frisell, Leonard Cohen, Ornette Coleman, Elliott Carter and Igor Stravinsky.

Founded in 2009 by Jeremy Rose, Earshift Music is a Sydney based Jazz Record Label reflecting the next generation of talent from the Australian jazz scene with a global reach. Described by NYC Records as "hell bent on pushing the very definition of jazz," Earshift is a forward-thinking label that not only helps distribute new music but develops creative strategies for musicians in a rapidly evolving music industry. With a musician as director, Earshift has developed a sphere of like-minded artists, fostering not only a scene but a community, crossing generations, gender/diversity and borders.