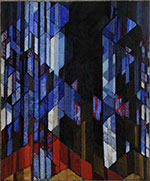 Kupka's Piano with Ensemble Offspring : The Machine and the Rank Weeds

These wild flowers, these rank weeds pushing up in the interstices of the machine, grow in importance and then overflow until they give the sections into which they have wormed their way like parasites an entirely unexpected coloration. (Gérard Grisey, 1986)

For Kupka’s Piano’s first concert in our 2014 series ‘Il faut être’ at JWCoCA we join forces with Sydney’s formidable Ensemble Offspring to present an exploration of the mechanic and the organic in music. As a combined super-ensemble, as distinct groups and as soloists we explore the free and the necessary, the lyrical and the rhythmic, the structured and the unstructured – musical time and the time of the ticking clock.

On the one hand Gerard Grisey’s monumental Talea, the organic ‘rank weeds’ emerge from a machine-like process, distorting it and transforming it. On the other, in Workers’ Union by Andriessen, the industrial rhythms – the turning of the cogs of the modern factory – are operated by the physical bodies of the workers, whose unity in struggle forms them into a single organism.

The undulating lines of Jane Stanley’s Helix Reflection call forth acoustic and psychoacoustic phenomena that seem to lead us into an alien ecosystem, while Matthew Shlomowitz’s Letter Piece 8 Sit Up Stand Down presents us with a musical moving robot built entirely on the alphabet.

Come along and hear these works along with a number of others, including a world premiere by Kupka’s composer Michael Mathieson-Sandars and Sydney based Damian Barbeler.

This project has been assisted by the Australian Government through the Australia Council, its arts funding and advisory body.

Further information for this event is available online at the event's website or by phone on (07) 3872 9000 or by email to info@judithwrightcentre.com