In 2020, the AMC has decided to commission not one but two Addresses. Legendary team Madeleine Flynn & Tim Humphrey will deliver the first Peggy Glanville-Hicks Address in 2020, followed by a second Address delivered by Sunny Kim on 8 December. Both Addresses will be delivered online.

Sunny Kim: To Dance with Our Others in Embrace
Tuesday 8 December at 6pm AEDT

The second Peggy Glanville-Hicks Address for 2020 will be presented by Sunny Kim - a Korean-born singer, improviser, and educator, now based in Melbourne. In her address, she will share her knowledge gained through years of creative collaboration with Indigenous and non-Indigenous Australian musicians, to bring to light the incredible power of music-making as a medium of relationality.

The Peggy Glanville-Hicks Address by Sunny Kim will be streamed online on the AMC's Youtube Channel at 6pm AEDT on 8 December. Register your interest and get reminded on Facebook. 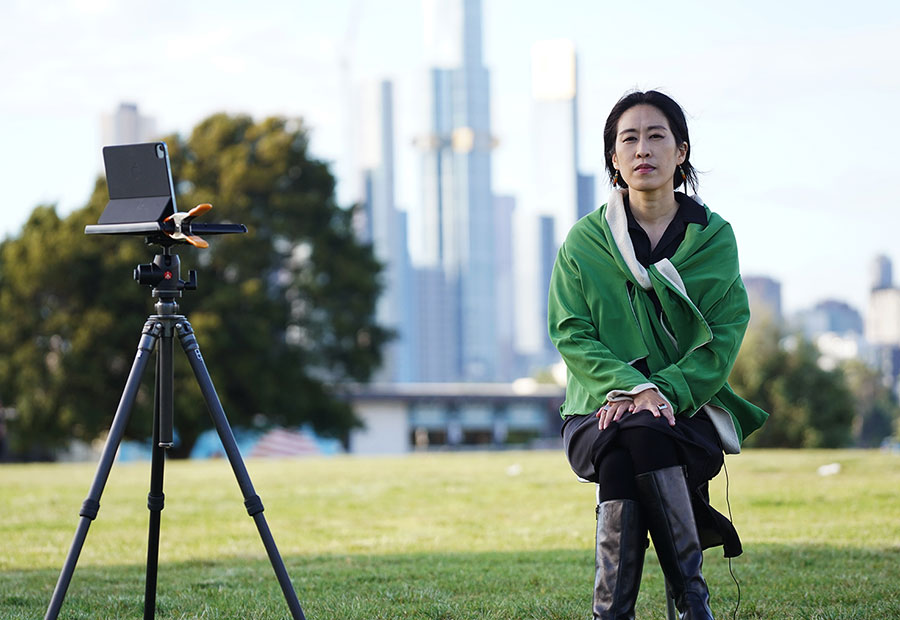 Sunny Kim is a Korean-born vocalist, improviser, composer and educator, based in Australia. Drawing from her life journey as a global nomad - Seoul, Kuala Lumpur, Bangkok, Denver, Boston, New York and, now, Melbourne - Sunny’s artistic practice seeks to find meaningful connections to people, culture and place through a dedication to self-discovery, deep listening and collaboration.

A two-time winner of Jazz People magazine’s Readers' Poll Awards in the Best Vocalist category (2012-13) and the recipient of the LIG Artist grant (2011), Sunny Kim has released five albums as a leader: Android Ascension (2008), Painter’s Eye (2012), The Shining Sea: Live at the Olympus Hall (2014), The Dream of the Earth (2016), and Tribute (2019). Three of these have been nominated for the Korean Music Awards in the Best Jazz Record category. Sunny has recorded as a featured vocalist on numerous records such as After Dark (Prana Trio, 2005), White with Foam (MadLove, 2009), and Keep Your Heart Right (Roswell Rudd Quartet, 2007).

After completing her studies in jazz under the mentorship of Bob Moses, Jerry Bergonzi, Dominique Eade, Charlie Banacos and Frank Carlberg at the New England Conservatory in Boston, Sunny went on to work closely with hundreds of artists from all over the world, including luminaries such as Roswell Rudd, Ben Monder, Trevor Dunn, Min Xiao Fen, Pheeroan Aklaff, and Gino Sitson. She has toured internationally and has performed at the Carnegie Hall, Newport Jazz Festival (USA), Taichung Jazz Festival (Taiwan), ATP Festival (UK), Piacenza Jazz Festival (Italy), Jarasum Jazz Festival, Yeosu Expo (Korea) and the Arts Centre Melbourne (Australia).

Sunny has received grants from the Korea Arts Council for various interdisciplinary projects with poets, dancers and visual artists, including large-scale performances Act of Resolution (2011) and Diaspora (2012), with the contemporary dance company Mooe. Her composition 'Everywhere' was featured in the soundtrack of the film Late Autumn (2010) by director Kim Tae-yong.

As an educator, Sunny has facilitated hundreds of developing musicians from diverse backgrounds to find their creative voice through cultivation of intuition, body awareness and collaborative skills. Since 2007, Sunny has lectured at Hanyang University, Seoul Institute of the Arts, Soongshil University and Dankuk University (Korea) ,and has led workshops at the Creative Music Intensive (Australia) as well as the Indigenous Songwriting Workshop at the Banff Centre for Arts and Creativity (Canada). A former Assistant Professor at Dong-Ah Institute for Media and Arts, Sunny currently lectures at the University of Melbourne in Jazz and Improvisation.

About the Peggy Glanville-Hicks Address

The New Music Network established The Peggy Glanville-Hicks Address in 1999 in honour of one of Australia's great international composers. In the spirit of Glanville-Hicks, an outstanding advocate of Australian music delivers the address each year, challenging the status quo and raising issues of importance in new music.

Managed by New Music Network from 1999 until 2018, the annual Address is now presented by the Australian Music Centre.

'We welcome the New Music Network handing custodianship of the Peggy Glanville Hicks Address to the Australian Music Centre, and take on this responsibility with great respect to the tradition established over the 20 Addresses delivered to date. Since its founding in 1999 (under the leadership of then NMN President Marshall McGuire), the Address has developed into a landmark event in the Australian new music scene. Peggy's return to Australia in the 1970s was facilitated by then AMC Director James Murdoch, who provided a role for her at AMC in developing a collection of music by Asian composers, so it is most fitting that the AMC's association with her can continue in this way', commented the AMC's CEO John Davis.

The Peggy Glanville-Hicks address is the single most important national forum for contemporary music discourse, which honours one of Australia’s great international composers and provides a platform to discuss important issues facing contemporary music today. The event is free and, in the recent years, has also included the announcement of the winner of the Peggy Glanville-Hicks Residency managed by the Australia Council for the Arts. 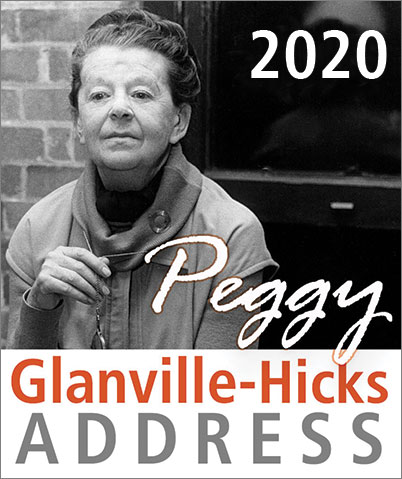 > Full transcripts - where applicable - of all previous Peggy Glanville-Hicks Addresses will be made available here shortly.

'In Answer to Your Question'
By Deborah Cheetham AO

'All Music for Everyone: Working Towards Gender Equality and Empowerment in Australian Music Culture'
By Cat Hope

'I wonder as I wander (The Digital Paradox: Paradise or Purgatory)'
By Kim Williams

'The Poetry of the Present'
By Nicole Canham

'A Case for New Music'
By Richard Gill

'Wondrous discoveries vs forces of darkness'
By Warren Burt