An orchestra of individuals: AAO at 25

Artistic director Peter Knight writes about the 25-year old Australian Art Orchestra. To celebrate the milestone, the AAO is releasing a series of solo performance videos, with the first one just out, featuring clarinettist Aviva Endean. Aviva is the Australian Art Orchestra's inaugural Associate Artist and has curated a series of events 'Art by Twilight' at the Heide Museum of Modern Art in Bulleen, Melbourne - coming up this Saturday (16 February) an event with the AAO's regular collaborator, turntablist Martin Ng.

This year the Australian Art Orchestra celebrates its 25th anniversary. I remember when the group was formed and the impact it had on me as an aspiring jazz musician - the first show I heard at the Continental in Prahran, Melbourne, with 20 of the most talented musicians on the scene. Bristling energy, barely tamed. It was exciting, and it reconfigured the idea I had for what a jazz musician could aspire to. There followed collaborations with musicians from Indonesia, Arnhem Land, and India, and performances of music written by the most challenging contemporary Western composers. It was a long way from what I had experienced as a music student, and opened in my mind a world of possibility that was expansive and exciting and that was directly connected to the here and now.

Aviva Endean in the AAO's 25th anniversary Solo Series.
More by the AAO on Vimeo.

The Australian Art Orchestra changed things for me, and I think it changed things for a lot of musicians and listeners. The vision of its founding artistic director, Paul Grabowsky, recognised that we live in a place of abundance and that as 'jazz' musicians and artists we need to respond to what's around us rather than look primarily to America and Europe for inspiration. A quarter of a century on, I believe that vision is perhaps more relevant than ever.

In 2013 I was appointed the Orchestra's second artistic director and have since tried to carry on this vision in my own way. The group certainly sounds very different now, and there are new faces, but I believe there is a thread we have woven through each of our projects that traces back to those first performances of Ringing the Bell Backwards in Melbourne in 1994.

This history is important. Understanding where we have come from as a group is crucial to building a vibrant future. As we celebrate 25 years we want to look forward while at the same time reaffirming our commitment to a set of core values that are centred on deep music practice and community building, and that also give space for the kind of individual creativity that made the first performance of the Orchestra I heard at the Continental in 1994 so exciting.

This individuality and anarchic spirit is somewhat at odds with a more traditional idea of an orchestra, which is generally associated with blend and seamless integration. But this is a contradiction that the Australian Art Orchestra has always embraced, and it's one of the things that sets this strange and wonderful organism apart from other musical groups. It's also the defining aspect that I have focused on to celebrate our anniversary.

Each of the musicians we work with is an improviser, but, more than that, each has a highly refined, idiosyncratic, and personal language on their instrument. When we come together as a group, these voices are the starting point for our sound. The composers we commission listen to recordings made by our musicians to inform their compositional processes, and when we rehearse we spend time improvising together and workshopping ideas towards the creation of a collective language.

To celebrate the 25th anniversary of this 'orchestra of individuals' we have chosen 12 musicians from our large pool of players to record solo improvisations that will form a portrait of the Australian Art Orchestra in 2019. Each of these recordings will also be captured in high resolution video by Melbourne company, Digital Pill. These videos will be released monthly with an accompanying photographic portrait by Sarah Walker, and a written response to the music commissioned from Australian music writers including Matthew Lorenzon and Jessica Nicholas.

I'm very proud to introduce our first solo recording made by exceptional clarinettist, Aviva Endean, who is also the Australian Art Orchestra's inaugural Associate Artist appointed as part of our Pathfinders Music Leadership program. Over the coming months I'm also very much looking forward to watching and listening to the recordings that follow by outstanding artists including Sunny Kim (voice), Martin Ng (turntables) and Mindy Meng Wang (guzheng). It's going to be an amazing 25th anniversary year for the Australian Art Orchestra. 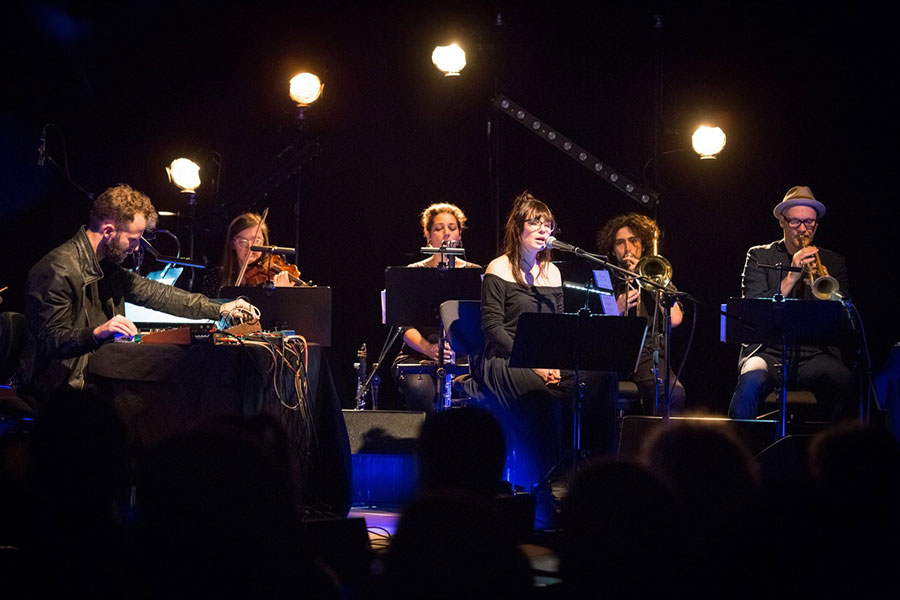