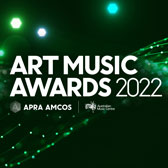 APRA AMCOS and the Australian Music Centre are thrilled to announce the finalists for the 2022 Art Music Awards, to be held on Wednesday 31 August at the Meat Market, North Melbourne.

The Art Music Awards celebrate a diverse range of individuals and organisations in the Australian music community, recognising excellence among Australia's finest composers and performers in contemporary classical, jazz, and experimental music.

The quality of nominated artists and projects is a testament to not only the talent, but also the openness to collaboration as demonstrated by art music practitioners in Australia. Notably, this year's finalists illustrate the impact of the global pandemic and the climate emergency on our musical culture.

The shortlist for Work of the Year - Choral includes two works featuring texts by First Nations artist and poet Oodgeroo Noonuccal: Joseph Twist's An Australian Song Cycle and Paul Stanhope's Requiem. Anne Cawrse earns a second nomination this year for A Gathering, and Brenton Broadstock receives a nomination for Pandemic, mvt.6 of "Shadow and Hope - Cantata from Six Continents in the Age of Pandemic".

Finalists for Work of the Year - Jazz include: Gian Slater's Grey is Ground album; Hand to Earth, a collaboration between Aviva Endean, Sunny Kim, Peter Knight, Daniel Wilfred and David Wilfred; I Hold the Lion's Paw's work Lost in Place,; and Benjamin Shannon's track See You Round the Traps (Milton Man Gogh).

Mindy Meng Wang and Carolyn Schofield are finalists in the Work of the Year - Electroacoustic/Sound Art category for their work, Undercurrent 暗涌, marking a second nomination in the category for Wang two years running. Other finalists in this category include Sia Ahmad (Depth Disintegration), Erkki Veltheim (Effigy, for viola and electronics), and Tim Bruniges, Julian Day, and Matt McGuigan (VERY FAST & VERY FAR).

The shortlist for Performance of the Year - Jazz/Improvised Music includes: Jeremy Rose & The Earshift Orchestra with Simon Barker and Chloe Kim for Disruption! The Voice of Drums (Jeremy Rose, Simon Barker and Chloe Kim); Pat Jaffe, Callum Mintzis and ensemble for A Sanctuary of Quietude (Pat Jaffe and Callum Mintzis); a collaboration between the Vanessa Perica Orchestra and Melbourne Symphony Orchestra for the performance of Love is a Temporary Madness, The Symphonic Suite (Perica); and ZÖJ Live at Melbourne Recital Centre (Gelareh Pour and Brian O'Dwyer).

The Award for Excellence in a Regional Area returns in 2022 celebrating the presentation and engagement of art music within regional communities. This year's finalists are: Andrew Veivers (QLD); Camerata, Queensland's Chamber Orchestra (QLD); Fred Cole (NSW); and Tura New Music and Marrugeku (WA).

Shortlisted for the Award for Excellence in Experimental Music are: ADSR Zine for their work in exhibiting, showcasing and presenting an online catalogue of publications, Hand to Earth for their work in composition, recording, release and performance of new music; Melbourne Electronic Sound Studio (MESS) for community engagement and education in electronic music; and Madeleine Flynn and Tim Humphrey for their ongoing project Witness Stand.

The 2022 Art Music Awards ceremony on Wednesday 31 August will also include the presentation of the Luminary Awards, recognizing the sustained contributions to Australian art music by individuals and organisations around the country. There are no shortlists for these categories. The Richard Gill Award for Distinguished Services to Australian Music will also be presented to a single recipient, an honor determined by the APRA Board of Directors.

Work of the Year- Choral

Title: Pandemic, mvt.6 of "Shadow and Hope - Cantata from Six Continents in the Age of Pandemic"

Work of the Year - Dramatic

Title: Poem for a Dried Up River


Work of the Year - Jazz

Composer: I Hold the Lion's Paw

Performer: I Hold the Lion's Paw

Title: See You Round The Traps

Work of the Year - Large Ensemble

Title: The Rest is Silence


Work of the Year- Chamber Music

Title: threaded in amongst the infinite threading


Work of the Year- Electroacoustic/Sound Art

Title: Effigy, for viola and electronics


Performance of the Year - Jazz/Improvised Music

Title: Disruption! The Voice of Drums

Title: A Sanctuary of Quietude

Title: Love is a Temporary Madness, The Symphonic Suite


Performance of the Year - Notated Composition