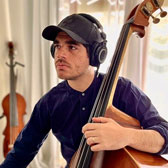 A powerful foundation in ensembles across genres, the double bass is often overlooked as playing a supporting role. In this concert, the double bass steals the spotlight in new experimental and exploratory works, journeying into improvisatory jazz, electronica, and nuevo tango. Co-Director Flora Wong says, "Having worked with many incredible bassists over the years, we thought it was time to shine the spotlight on some of the musicians taking this instrument well beyond its traditional role."

One such artist is the Colombian-born Australian double-bassist Bernardo Alviz, who will present his work Lienzos Migrantes. We interview Bernardo about his double bass practice and his work, exploring new techniques and timbres through with electronic delays.

We are interested in your work, Lienzos Migrantes. Can you tell us about how this piece came about, and what you were exploring at that time?

This piece, which is written for the left-hand only, was conceived as the main generating engine of ideas for the folio of compositions of my PhD. This piece continued my process of creating a specific language that could allow me to keep doing music after my right-hand injury. The piece was born out of a series of improvisations that I did using the delay functions of the Boss ME80 effects pedal, in which my interest started as a way to get used to the "invisible pulse" feeling that the delay can incite in one's perception. More specifically, I became interested in trying to find ways of creating an organised formal structure based on the possibilities that time modulations can take place using the delay.

The improvisations led to two important emergent aesthetic realisations that would shape the composition process after the concept of instrumental resistance. The first one, which I called the Tension Formula, was the result of finding a simple compositional constraint that could help me prescribe physical movement as well as a mechanism that could measure it contextually; and the second one, was to structure the piece's compositional elements using gradual processes, which consequentially emerged as a way to implement the formula in a manner that could represent the tendencies of my musical aesthetics.

How have these ideas expressed themselves in the work?

Each movement is based on utilising physical tension as a compositional parameter. I tried to use it in many formal contexts throughout the piece which allowed me to experiment the many interactions that may work between physical tension and the other parameters such as rhythm and timbre.

In the first movement, in which I use the delay at 6000ms and 5000ms, physical tension was approached in a rather empirical way, the natural harmonics were thought as the moments of physical release in opposition to the stopped notes which require more physical effort and, therefore, produce more tension when performed. This movement was conceived as a structured improvisation.

In the second movement, with the delay at 4000ms and 3000ms, I decided to create a proportionate hierarchy of playing techniques according to my subjective appraisal of their physical tension. This led me to consolidate the Tension Formula, in which I combine all the variables that make part of physical movement across the fingerboard of the bass in order to create "paths" of movement, and in that way define patterns of tension shapes that can be organised to create coherent formal structures. The process was incredibly long as I decided to pre-determine "Tension levels" per each bar and deduct the comprising parameters using the formula accordingly. As a consequence, I was writing one bar per day, which made me realise at the end that perhaps this constraint was way too restrictive.

In the third movement, with the delay at 2500ms and 1100ms, I didn't use the Tension Formula as a derivative constraint, but I used the experience of using it throughout the second movement to pre-determine tension instead by creating interval patterns in a more visual way. I created a matrix of 384 actions comprised of each of the four playing techniques that were being used, each divided in 12 intervals and 8 possible dynamics. I wanted to create a movement which was a single row of intervals in which by varying the order of interval succession, I could create sequences of physical movement and condition their tension accordingly.

The title came almost at the end of the whole process as the feeling I got from working with the transmutations of the delay elicited a sort of personal connection between the course of my life and the processes present in this music. I have been in a constant state of migration in which tension would appear and mutate constantly, challenging stability and requiring constant assessment and adaptation. I saw that the first movement could well represent my life in Colombia, where improvisation is key for survival; the second movement was in core extremely rigid in its structure and require precision for delivery, just like my years in Germany; and the third movement felt like a conjunction of both, a sort of organised and more relaxed rigidity in which both improvisation and precision could be delivered in the same context, what I feel represented my reaction to my injury and the life I was starting to build in Australia.

Last year you presented this work alongside the idea of "instrumental resistance". Can you tell us a little bit more about that?

Instrumental resistance is a concept that I was always aware of as an instrumentalist, as I've been deeply interested in how the immediate physical perception of performers can shape the appraisal of music, however, I didn't know that it existed as an academic subject an even more, that it had a name!

When I started my PhD and spent countless hours reading about embodiment, gesture and physicality in performance, I found a fascinating book by the composer Paul Craenen titled "Composing under the skin" (2014), in which he describes what he calls the instrumental resistance. For Craenen, there is always a physical mediation between a performer and an instrumental medium, which will result in a music that is the testament of their interaction conditioned by their respective physical limits. This mediation is characterised by a varying degree of physical resistance that the instrumental medium enforces on the performer. This resistance will manifest itself in several ways depending on the physical disposition and intention of the performer.

In my case, having lost the ability to use my right hand to play my double bass, resulted in the immediate modification of the degree of resistance that I would encounter if I wanted to play my instrument. By creating a music for the left hand, I wasn't transforming the bass' resistance, but I was approaching it under a different dynamic. My expectation was to create a language in which the perception of this specific music would not solely rely on the traditional parameters of music such as rhythm, harmony, timbre, etc., but on a very present physical layer of expression that could create a realm of physical awareness and therefore carry the expressive essence of this music via its immediate physical perception.

What have you discovered about the double bass - or yourself as a musician - in the creation and performance of this piece, particularly through the incorporation of electronics?

I would say that the most amazing thing that I encountered by amplifying the bass and running its sound through a sound processing pedal was that an entire new universe of timbre came to life, which meant that the music I was writing was being enveloped by a distinctive palette of sounds.

Consequently, after spending a lot of time developing a specific language for the left hand, I ended up developing some technical gestures that I think became idiosyncratic of my artistic process after realizing the advantages of amplification. One of those was what I called the "Bitone Pizzicato", which I conceived it as a sort of inverted pizzicato, in which I position my index finger behind my thumb to pluck the harmonic node with the fingernail. The beautiful thing, even though is a rather uncomfortable technical gesture, is that in some points of the string, this would result in a multiphonic effect, which I think is a beautiful colour and a distinctive gesture for this music.

Thinking about music practice and injury, how has your relationship with the double bass (and music more broadly) evolved post-injury? What advice would you offer to a musician who may be going through a similar process of healing or adaptation while maintaining their music practice?

I would say that my relationship with my instrument has changed dramatically after my injury started more than 5 years ago. Before that, I was dedicated to a full-time career in orchestral performance, and the interaction with my instrument was conditioned by the idea of being part of a collective of sound, which implied learning and mastering the sound of tradition.

After the injury, I wasn't part of any collective anymore. There was an immediate loss of identity as this had been defined by communal music making. I felt completely alone, and this resulted in prolonged despair and depression.

Only when I had internally accepted that a part of me had vanished with the injury, I was invited by life to be re-born and to re-build myself through music, however, under completely different terms.

After all these years of engaging fully in creating a new self, I can say that my union with my bass is stronger than ever before, as I have developed a language that only my body can speak, making our communication unique and profoundly intimate. However, I am slowly finding a way to share this music and reconnect perhaps with the world that I feel I had to leave behind 5 years ago.

My advice to anyone that might be experiencing what I had to endure, is to always listen to your body, as it never lies. If you are going through an injury, seek reliable professional help. As in my case, diagnosis was the turning point, and was only achievable until I found the correct assessment by an absolute expert.

Adaptation was key for my experience, and it was only possible after a long period of self-assessment in which I had to reconnect to all the memories and tacit knowledge that I have accumulated so far in order to keep alive in music. I discovered many things of myself that I didn't know I could do before. What we learn through honesty can never be lost and can help us create the best version of ourselves even in the most challenging of times.