Christopher Sainsbury: Bark of the ‘bidgee (2019)

Malcolm Gillies heard Christopher Sainsbury's new work at the Canberra International Music Festival - he talks with Chris about the composition, its premiere, as well as Chris's new Platform Paper NGARRA-BURRIA: New music and the search for an Australian Sound, published by Currency House earlier this month.

Chris Sainsbury, a Dharug/Eora man with three decades of professional and community music-making under his belt, is surely this year's Australian musician of the moment. A Senior Lecturer in Music Composition at the Australian National University, and former Head of Arts and Media at the Eora Centre in Sydney, Sainsbury has since 2016 been the driving force behind Ngarra-Burria: First Peoples Composers initiative. With partners including the Australian Music Centre, APRA AMCOS, ANU, Ensemble Offspring and Moogahlin Performing Arts (Sydney), Sainsbury has sought to empower an up-and-coming generation of Indigenous composers. His experiences with, and further visions for, that bold initiative have been published in the latest Platform Paper, Ngarra-Burria: New Music and the Search for an Australian Sound, that was released by Currency Press at the start of May. Its appearance coincided with the premiere of his latest composition, Bark of the 'bidgee, on 5 May, at the National Gallery of Australia, as part of the Canberra International Music Festival, to which Sainsbury is also a cultural adviser. 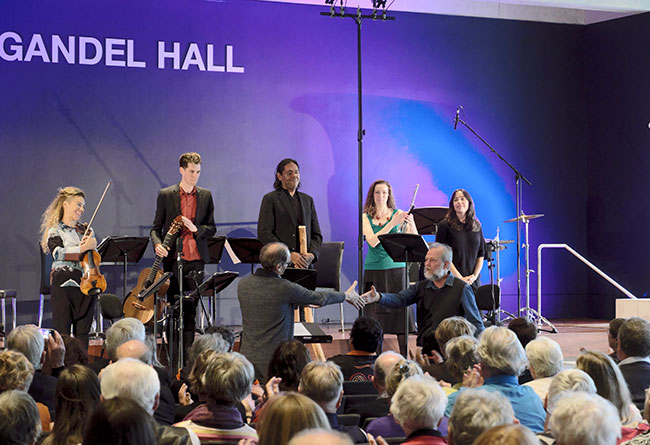 'Re/discover Bach' was the theme of Canberra's twenty-fifth anniversary festival, directed by Roland Peelman, and Sainsbury's new work, commissioned by the festival's own 'A Major Lift' donor circle, fitted within the festival's ambitious Bachian plan. So, Bark of the 'bidgee was placed between a performance of Bach's Italian Concerto and the final Contrapunctus of the dying Bach's Art of Fugue, both arranged for the sonic.art saxophone quartet of Berlin, within a concert titled 'Bach in the Central Desert'. This title paid homage to the concert's concluding items, sung by the Ntaria Choir from Hermannsburg in central Australia, which still celebrates its Lutheran heritage.

Sainsbury's seventeen-minute work, however, is more a musical exploration of the Canberra region, referring to the nearby Murrumbidgee River, and, in the title of its second movement, to one of the earliest settler homesteads near its banks, Lanyon. Sainsbury's intentions for the work are neatly described on the title page of the score:

The work's six movements suggest the Murrumbidgee as a previously pristine place inhabited by Aboriginal people [mov. 1], as a place of the music and dances of new settlers [mov. 2], as a place of rippling messages carried along the river [mov. 3], as a place of corroboree and ceremony [mov. 4], as a place of deep secrets and mystery [mov. 5], and as a place of potential harmony between the two cultures that now live along the shores of the 'bidgee [mov. 6].

But, despite these local markers (and Sainsbury did his Sydney PhD on musical regionalism), he considers that his work is 'a transferable narrative and expression of Indigenous experience'.

Where, you might ask, does Bach come in? The answer lies partly in the last movement, entitled 'Bach of the 'bidgee'. It is underpinned by a repeating passacaglia bass (on guitar), soon being joined by an original Aboriginal melody (flute), as one representation of the intended cross-cultural harmony. Which introduces the important topic of the work's instrumentation: flute/piccolo (Sally Walker), violin (Véronique Serret), amplified classical guitar (Callum Henshaw), light percussion (Bree van Reyk) and yidaki (didjeridu) in E and in D (William Barton). Indeed, a unique combination, although one that Sainsbury, a guitarist, sees as similar to Hans Werner Henze's El Cimarrón (1970) for voice, guitar, percussion and a player of flutes/ryūteki/Jew's harp.

As explained to me by Henshaw: the guitar has the most 'Western' of the instrumental sounds, in Sainsbury's piece, while the yidaki is the most Indigenous, and the rest are variously placed in between. It is not surprising then, that it is the guitar that has quite a deal of Bachian writing also - by Sainsbury's own testimony - in the work's energetic fourth movement 'Sky Dancing'. This ensemble initially presents as a very light, sometimes radiant, texture and only moves to a lower average tessitura with the introduction of the yidaki in the third movement, 'Ripple, ripple: Stories, old and new, ripple along the Murrumbidgee River'.

As well as the instrumental affiliations, then, there are rhythmic and pitch markers of the two cultures. Movement 2, for guitar and light percussion, for instance, is very rhythmical: a short glimpse of 'courtly' settlers' dances, even dated to 'ca. late 1800s'. The movements with predominating Indigenous focus - 1, 3, 4 and 5 - are reliant on a curious 'two octave bi-tone scale': Bb B C D E F# A C F B. But there is nothing 'bitonal' about this scale, as Chris Sainsbury explains in interview: 'A bi-tone is a technique - the playing of the note each side of a stopped tone on the fingerboard of a stringed instrument. As one follows the notes behind the stopped tone towards the nut a specific scale or pitch series is found on stringed instruments. It sounds best on fretted instruments.'

Sainsbury went on to identify two instances of the whole (two-octave) scale that effectively 'bookend' the work: in the flute part in the first movement's final ascending flourish and the same instrument's descending flourish just two bars before the last movement's conclusion. He also describes the strict use of bi-tone pairs, or their multiples, in many of his chord constructions. But this usage is very limited: 'It's all got to stay with the motive or phrase as derived from the [bi-tone] scale or the chords derived from the pairs of bi-tones'. That is, he avoids compositional techniques such as inversion of motives or chords derived from bi-tone pairs, and uses no expansion or contraction of intervals of the bi-tones, no fragmentation or inserted tones. 'I feel there is enough interest in the scale, the bi-tone pairs and the chords they form without need to further reshape them.' Sainsbury likes this restricted use of pitch materials as 'it's a quite non-Germanic way to write, less European'.

As supervised premieres are often considered definitive of a composer's intentions, I asked Sainsbury about his hearing of the work in rehearsal and premiere. Was it as he had intended? What would he change before releasing the work? He commented upon some balance issues - the guitar was amplified 'a bit too low for my liking'. Indeed, he considered that, in a big hall, such as the National Gallery's Gandel Hall, with a capacity audience of over four hundred, 'the whole performance could have had some 'sound reinforcement'". In rehearsal, he also had changed several small matters as a result of the players' suggestions: Walker's suggestion of a fluttertongue to dovetail with the violin, Serret's and Henshaw's suggestions to thin out some chords, although he did not agree with Peelman's suggestion (as conductor) that the 'Lanyon' movement be rescored in ¾ time. And he stated that the segueing between movements of the premiere was not his intention; nor is it marked in the score: 'I'd prefer the listeners to hear the six movements with the breaks.' But he praised the premiere as 'played very well, given the limited rehearsal time'. So did the enthusiastic audience, and Limelight's critic, Angus McPherson, who referred to 'Sainsbury's painterly score' as being 'both pictorial and enigmatic', in an overall five-star review of the concert (Limelight 6 May 2019).

Of course, there is a final question to consider: how does Sainsbury the Indigenous composer line up with Sainsbury the recent Platform Paper author? That book, like his Bark of the 'bidgee, has six chapters and intertwines 'settler' and Indigenous themes and relationships in search of a respectful harmony. Indeed, his final chapter is 'Thoughts and Recommendations for the New Music Sector'. Its concise recommendations need to be read and understood by all who engage with the incredible diversity of today's Indigenous arts or artists. Sainsbury wants to move past notions of 'authentic' Aboriginal music or instruments, to recognise that the diversity of Indigenous people rivals that of the rest of the population. His book points out many past failures of Australian composers to appropriately reference Indigenous work, and calls for a reframing or retitling of those works. Moreover, he recommends that non-Indigenous composers 'consider the benefits of a long-term engagement with Aboriginal people versus a one-off collaboration for a commission'. In short, quoting Jimmy Little, Sainsbury concludes 'everyone has a part to play'.

Asked about the link of his new composition to the main themes of his book, Sainsbury gave a most eloquent reply. His piece is an Indigenous work, and 'Indigenous voices need fostering'. Bark of the 'bidgee has 'reclaimed the space' by its scheduling of an Indigenous composer, rather than a non-Indigenous composer who just references Indigenous music. His work is an 'artful and fresh articulation of culture'. Lastly, Bark of the 'bidgee is 'suggestive of a hope for now and the future'. Yes, Chris Sainsbury's inspiring new work does well reflect the themes of his manifesto in support of a new Australian sound.

Malcolm Gillies is a musicologist and arts critic, now resident in Canberra.