Composer, multi-instrumentalist, improviser, instrument builder, artist and inventor Cor Fuhler died unexpectedly on 19 July 2020 at his home in Turramurra, NSW. Jim Denley writes about his friend and colleague in this article, sharing some of Cor's own notes and observations about music and sound.

I first met Cor sometime in the mid 1990s at a music festival in Zurich. Our group, Machine for Making Sense, shared a green room with the Dutch band 'Palinckx', and we hung out with their shy and extremely handsome keyboard player. Over the years he became a great friend. If you go to his website or to his label Conundrom you'll discover the breadth and depth of his work - he was brilliant across many disciplines.

The Sydney poet and vocalist Amanda Stewart, who also met Cor with me in that green room, wrote about him:

Some useful adjectives about Cor

He married the wonderful Aussie violinist Anna McMichael - so he regularly came to Australia - and I remember hearing him play, and playing with him in What is Music festivals in the early 2000s. My first clear memory of co-creating with him is a trio with harpist Clare Cooper at the Old Darlington School in Sydney. He made the piano sing in ways that I'd never experienced before and there was a fluidity to his deeply intelligent embodied listening/sounding gestures.

He had an origin myth for this fascination with sound and the piano. He wrote:

During the 1960s in my Grandfather's local cafe on the theatre stage stood an old piano with a buzzing sound. When I lifted the top lid, I saw a broken string rattling against the bass strings, causing this interesting sound. Ever since then I've been fascinated by the inside of the piano... One can hardly think of another musical source so poignant, grateful and diverse, visually as well as aurally.

(He also had an origin myth about his introduction, as a child, to alcohol from the same cafe.)

But in our trio with Clare, it was the depth of his strategies in using sound for intra-action that so impressed me.

RELATIONSHIPS
When new sounds are discovered (or at least new to oneself) on and around an instrument, a relationship has to evolve into a natural place within one's playing. The first stage is often an infatuation with that new sound or approach; a perhaps not so interesting stage caused by the inward focus creating an impenetrable world. When at dinner with two people passionately in love, one can feel redundant like a '5th wheel on a car'. A similar situation occurs with a musician in love with a new sound: he/she neglects the ensemble and audience. The infatuation stage needs to develop into a more mature relationship which is more responsive towards the surrounding situation.

In our trio at the Old Darlington School, Clare and Cor's strings braided together into an incredible sonic mesh. You can hear them together on the album CRAX with the German trumpeter Axel Dörner.

It is this responsiveness to context that defines the way I think of Cor's playing - this mature response to relationships between elements in music-making and a deep sharing with, and acceptance of, other agents, be they human or non-human.

I saw him, at the Old Darlington School again in 2006, in a remarkable group with Robbie Avenaim, Chris Abrahams and Dale Gorfinkel. The music was fabulous, but quite long. After an hour, or maybe a little more, it seemed like a good moment for completion had been arrived at, but Dale continued, playing a solo coda for a good 10 minutes. Eventually the other musicians re-entered to try and find another collective full stop. It seemed like one of those awkward moments you sometimes get in improvisation. I talked to Cor about it afterwards and he was totally relaxed about it. He said something along the lines of 'that's why we love Dale's playing, he's unique and doesn't easily fit into templates. His brilliance has to do with his unpredictability'. You can listen to a trio, AFG Plains, of Robbie, Dale and Cor recorded around the time of that concert.

In making our duo recording Truancy over a period of 12 weeks in 2013, I would get the train to his house in Turramurra once a week, and we'd play and sometimes record. Those plays were joyful for me. I can only describe the experience as being like two small children in a sandpit making structures together and wiping them away - he was the cheekiest, most intelligent, most fun, most playful playmate. Time would disappear, or maybe, more accurately, the present would expand into a vast immersive moment - our musical sandpit was an alternative universe. It's so hard to talk about music, but Cor was very good at describing through analogy.

Our musical life together, from about 2016, expanded way beyond our sandpit into a vast field. Cor had always been interested in the orchestral - you can listen to and read about the 'Corkestra' which he had in Europe on his website. When Cor moved to Sydney and expressed an interest in joining The Splinter Orchestra, I was a little worried. How was this vastly experienced, quite opinionated bandleader going to operate in our radically inclusive, non-hierarchical band? I shouldn't have worried. He described Splinter as '...the leaderless and conductor-less orchestra [that] usually hovers around minimalism, and is based on a social, democratic, gender equal, and non-egotistical view towards cooperation via improvisation, conceptual ideas and site-specific conditions.'

He taught us, but never instructed us, gently imparting knowledge through music itself, bringing such experience and deep thinking to our community and its projects. Even though many of us were inexperienced, he always made us equals in the co-creation.

This week, in organising his funeral, Laura Altman, Peter Farrar and I were at his house collating photos and paintings, and we looked through his notebook. On one page were ideas for a 'Corkaustralia', and he had a list of people he would have had in that group. That project never got off the ground, and I think probably because Splinter satisfied his need to work on a grand scale. He wrote: 'Over the years, the Splinter Orchestra has become a social and artistic meeting point and a way to test and recalibrate one's own ideas.' 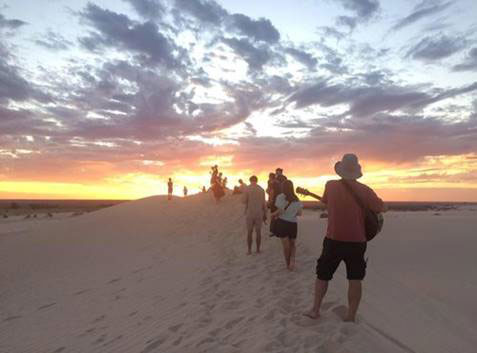 He was passionate about our Splinter projects. He wrote of our time in Lake Mungo in 2016, a deeply important time to many of us:

When first arriving at Lake Mungo, I was completely struck by a unique mixture of extreme serenity and extreme harshness. Remains of both a cremated woman (Mungo Lady) and a man (Mungo Man) were found at Lake Mungo, proving that a human civilisation has been living there for 50,000 years, making it one of the earliest human occupied places on our planet. Even though the 'lake' has been dry for approximately 15,000 years, I could still sense the history of water. The east outer area of Lake Mungo consists of large sand dunes in which I personally felt alien and secluded from the world. The present area is ancient in the sense that it looks the way it has appeared for thousands of years.

During its voyage, the orchestra produced sounds based on their own inner logic and their relation to other sounds in an 'un-hierarchical' fashion. 'Tuning' is done in relation to oneself, others, the space, the environment and objects coincidentally present. Although I am a pianist with a Master's from the Amsterdam Conservatorium, have accumulated 35 years of experience in the music industry, and possess a PhD in composition from the Sydney University, it felt strange and confronting to arrive at the Adelaide Town Hall and hear the Adelaide Symphony Orchestra play a fixed composition in a tempered scale. Music, lead by a single person and played in equal tempered scales, felt narrow to me in the sense that, within an octave, only a grid of 12 arbitrary pitches out of an infinitive amount were used, and only one person's (the conductor) interpretation of the moment was allowed to eventuate. What I used to perceive as being 'in tune' had become 'dissonant' and out of tune, and vice versa. During the days before the Adelaide event, my ears had been 'sharpened' and renewed, achieving an unbiased open state towards sound, regardless of origin, pitch and colour, and, perhaps most importantly, without hidden agendas.

I am not the only one in the orchestra who felt changed during the described week in my attitude towards sound and music in a social context, and as part of a simultaneous discourse with the strange, remote, unique, amazing, ancient places Australia has to offer when one is prepared to listen and hear.

Since that sublime time together in Mungo, many of us became aware of the depth of his alcoholism. It was a shock. I had toured with him, spending weeks on the road, never suspecting he had this massive problem. Before 2016 his family had struggled to help him, and over the last four years many Splinters and others from the Sydney community endeavoured to support and save him. At the front line of that struggle was the remarkably caring, patient and loving clarinetist, Laura Altman, who in the months leading up to Cor's death was a great friend and massive help to him - here they are together the day before he died. 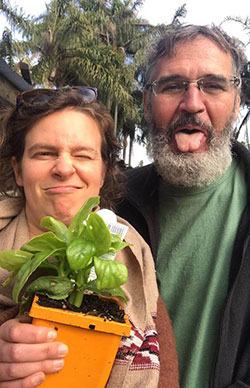 The final word goes to Cor.

Musical performance is one of the few situations in which I personally can fully concentrate, focus and be 'in the moment'. Playing music outdoors, participating in sound walks, and building open-air installations has noticeably affected my experience as sound artist, moreover, it has impacted my practice as a 'traditional' musician on a stage inside a standard music venue. Maybe I can compare it with the following: I was born and raised in a small country town dominated by nature, farms, animals and trees. When I moved to crowded Amsterdam in 1983 (to study piano at the Conservatorium), I carried my 'country attitude' as a protective buffer to survive in a city environment. Similarly, experiences playing open-air can impact performance practice in traditional venues and we all should play/listen outdoors as part of our musical education, whether busking or participating in sound walks. Open-air events are continuous balancing acts and they have helped me deepen my understanding of who I am and how I relate to place and time: the essence of being a musician. (Cor Fuhler, February 2017, Wahroonga).

Cor Fuhler's memorial service took place on Monday 3 August - you can view it online for the next few weeks.