[Update 8 August - the resource is now available for purchase through the AMC Shop.]

The music of Liza Lim is a new education resource from the Australian Music Centre, designed for senior secondary and early tertiary teaching. By looking at works written during a period when Lim was becoming increasingly engaged with Indigenous cultures, the resource discusses ways of exploring sound beyond traditional approaches to music writing, and shows how a composer integrates an understanding of something non-musical into a musical context.

The resource, prepared by Kim Waldock, Head of Education for Sydney Symphony, is released by the AMC with support from the University of Huddersfield in the UK. Launched at special workshops with the composer present in Melbourne (8 August) and Sydney (10 August), the resource is now available for purchase online - order your own copy from the AMC Shop at $105 (AMC members get a 10% discount). 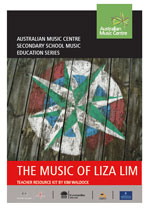 The music of Liza Lim examines a range of Lim's work, from the solo cello work Invisibility, through Songs found in dream for mixed chamber ensemble, to the full orchestral works The Compass, and Pearl, Ochre, Hair String - all works that exhibit strong influences from Indigenous and Aboriginal music making. The resource explores the compositional devices Lim uses to reflect these influences, specifically Indigenous Australian 'Songlines', the aesthetic of 'Shimmer', the integration of traditional instruments, as well as compositional techniques used to evoke Indigenous influences without using traditional instruments.

The resource kit examines the works using elements of music and compositional devices such as instrumentation, tone colour, pitch, texture, structure, rhythm and dynamics. It incorporates score reading and listening exercises to stimulate critical response and analysis from students, and includes a number of compositional exercises based on elements such as tone colour, structure, texture and extended performance techniques. Advanced performance practice issues are also discussed, such as extended performance techniques, notation, altered tuning and the use of microtones and multiphonics.

Including sample scores and audio recordings, The Music of Liza Lim also references a number of online resources, including video footage of performances where students will be able to see some of the extended performance techniques in practice.

The Music of Liza Lim contains material and resources particularly suitable for:

The following is an edited extract from The music of Liza Lim.

While living in Brisbane, Liza Lim had opportunities to encounter Indigenous Australian culture which became a source of inspiration for a number of compositions, changing the sound of her music. Up to that point her music had mainly been influenced by Asian traditions and European compositional trends.

In 2006, as part of her preparation for the Adelaide Festival, Liza organised a visit to Yirrkala, Dhanaya (in East Arnhem Land) in order to hear the Yunupingu women sing. As it happened, her main contact there passed away during that time. Liza was able to meet the women and hear their music within the context of a funeral and the related rituals that accompanied it. This was an extraordinary opportunity for her to glimpse the intimate working of the rituals of an ancient culture and it made a huge impact on her compositional output after that time.

Coming into contact with Aboriginal cultural systems has involved a perspective shift in my work from the horizontal construction of Chinese knowledge - with its cosmologies, writing systems, poetry and other cultural forms - to a much more vertical idea of structure made up of different layers of transparency, viscosity, opacity. Shimmer, an effect of flickering light or a pulsing aural quality, has an absolutely central value across Australia and Aboriginal cultures as an indicator of the presence of a spiritual reality. The aesthetic quality of a shimmer (whether found on a canvas painting, a body painting or the beating of clap sticks) is associated with the creative transformation of matter and a tangible connection to ancestral time, explained Liza Lim later (Ros Appleby: Women of Note, p. 117)

When Liza composes she draws from a range of key philosophical ideas which help inspire her music. This means that she is not the type of composer who writes a tune and then considers how it can be harmonised, contrasted or varied, working solely from musical stimuli. She often reflects on the way different cultures articulate notions of time, space and ritual.

This education resource investigates how these ideas from ritual culture have been included into her pieces and how she plays with notions such as 'shimmer, radiance and shadow', or 'violence and meditation' to construct her unique musical language by considering four works which are derived essentially from the same set of ideas that have developed over a six-year period.

'Songs found in dream was one of the earlier pieces, written as an exploration of this aesthetics of shimmer. And not only shimmer as a sort of positive quality of shininess, vibrancy and oscillation, but the way in which the qualities of shimmer are veiled. To see a shimmer there must also be obscurity and dullness. So there are transitions between states that I explored in this piece. That's important to me. What's important is the fact that there is a landscape in which there are these transitions happening, rather than it being about any particular state. They stand for the states which you could call shimmer, shininess, whatever. They stand for a certain kind of attunement, and then states for dullness where one moves away from a clear attunement. Qualities called dullness, veiling, obscurity, dustiness, stand for another part of that attunement process in the same continuum if you like. So that's the basis for the musical language', said Liza in a 2011 online interview with Jennie Gottschalk.

The pieces examined in this resource evolved through Liza's continuing engagement with and understanding of Aboriginal culture which was first seen in works such as Glasshouse Mountains (2005) and The Compass (2006). Moving forward, Liza has written a number of compositions which delve deeper into Indigenous traditions exploring the notion of shimmer as something that has great artistic value. As alluded to above, the idea of shimmer, which in Aboriginal culture represents spiritual power, can be explored not just as one kind of musical idea but ranges from pulsating repetitions of sounds and transparent textures or, in its veiled form, as flickering microtonal dissonances, rough, grating sounds and complex layers of musical material. These qualities can be detected in the related works Ochred String (2008), Invisibility (2009) and Pearl, Ochre, Hair String (2010), examined later in the resource.

It must be said of Liza Lim that while her music challenges the listener and performer, it is always thoughtfully considered and crafted - inspired by some experience which is thoroughly researched and thought through before the artwork comes into being. She is an intelligent woman, a gifted composer who goes beyond traditional approaches to composition with a distinct and wholly unique voice. Because of this there is nothing of the simplistic or tokenistic in the way she addresses Indigenous influences in her music. The consideration is deep and reflective and an understanding of her thinking - usually available in her generous program notes - is highly recommended to enhance the experience of listening to her music. Much of the content of this resource is the words of the composer herself.

The idea of 'shimmer'

Lim has since written a series of compositions in which she has explored these ideas, especially in regard to the aesthetics of shimmer and the shimmer effect that arises from the interactivity of vertical layers. These works include Shimmer (2005) for solo oboe; Songs found in dream (2005) for oboe, clarinet, bass clarinet, alto saxophone, trumpet, 2 percussion, cello and double bass; In the shadow's light (2005) string quartet, Shimmer songs (2006) 3 percussion, harp, string quartet; The Compass (2006) for large orchestra with flute and didjeridu soloists, Ochred String (2008) for oboe, viola, cello, double bass, Invisibility (2009) for solo cello; and Pearl, Ochre, Hair String (2009) for orchestra.

While the dictionary defines shimmer as a 'subdued, tremulous, glistening, fitful, or wavering light', one needs to remember that shimmer is not just about the moments of light, but the co-existence or alternation of light with darkness or dullness. For something to shimmer there must be an equal amount of rapidly alternating brightness with dullness, it is more than just the flicker of light. It is these transitions that interest Liza and influence her choice of tone colours and treatment of texture.

Shimmer, or shininess, stands for a certain kind of attunement. Qualities called dullness, veiling, obscurity, dustiness, stand for another part of the same continuum, the composer says.

So basically Liza is saying that you cannot have one without the other. These juxtapositions are therefore an important compositional idea which she explores in these compositions. One example of a type of sound that might lead to or include another, can be found in her use of granulated or gritty sounds, where the smaller 'grains' which make up a sound are heard. A particularly good example of this is the sounds created by the guiro bow used in the cello solo Invisibility.

Yet another way of conveying this sense of shimmer is through the layering of one thing onto another, using qualities of transparence and opacity as parameters. In the program note to Pearl, Ochre, Hair String, she talks about '…moving lines of sound as maps showing the "turbulence patterns" created by the passage of unseen presences...'.

In Invisibility the serrated bow acts as one type of layer and the normal bow as another in the section in which both are used simultaneously. The serrated bow itself includes the hair layer and the wood layer, creating a granulated effect when it is applied to the cello string. The serrated playing surfaces used in these and other pieces create vulnerabilities in the resulting sounds. The notated pitches only partially emerge. The obscuring of them is audible, and has this dull quality, but also highlights the vibrancy of the full contact of bowhair and string.

The idea of 'shimmer': further investigation

2. 'ELISION: transference (2) - Liza Lim' - Liza Lim in an interview about shimmer on www.soundexpanse.com