Getting to know David Lumsdaine's music

Michael Hooper's book The Music of David Lumsdaine - Kelly Ground to Cambewarra has just been released by the UK-based publisher Ashgate. Here, Hooper explains how he approached Lumsdaine's work in his book, and describes his early exposure to it as a first-year student in Sydney. 'It worried me then and it worries me still that it is so hard to find out how music by Australian composers of Lumsdaine's generation actually works', he writes. 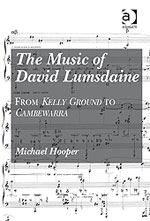 I first encountered David Lumsdaine's music in 1997 as a first-year student at the University of Sydney's Department of Music. Lumsdaine's music was part of the introductory course, and all the expected composers (and a few unexpected ones) were on the list, a canon of core composers central to Australian Music. Although the course was, in the best sense, anarchically divided between a history of Western music and the problematisation of that concept, Australian Music seemed a topic worthy of the stability that came with its capital letters.

Most of the composers on the list were close to hand and it made sense to get to know their music. The fact that Lumsdaine lived away from Australia made little difference, and both he and Nicola LeFanu were visitors to the Department.

What struck me at the time was that Lumsdaine's music was longer than other works on the list. It was a superficial observation, but with so many composers writing 7-10 minute works, encountering a corpus of compositions that were 20-30 minutes in duration set them apart. And the music needed that duration, driven by ideas that were ambitious and difficult to pin down, both complex and very lucid. It was also music that was apparently Australian - Aria for Edward John Eyre, Cambewarra - and also not limited by the notion: Ruhe sanfte, sanfte ruh', a response to Bach, is simply extraordinary.

Although the idea of an 'Australian composer' is problematic, it was nevertheless important for me as a student to encounter his music as canonical, as one of a short list of compositions that one ought to know, and which one could expect that others knew, too. There was (and is) great value in sharing such understanding with one's peers.

When I began a project to write about his early music it was immediately clear that there was little literature already written. Michael Hall's introduction to Lumsdaine's music Between Two Worlds: The Music of David Lumsdaine, was just about to come out, but otherwise there were a handful of CDs, liner notes, reviews and a set of scores. It worried me then and it worries me still that it is so hard to find out how music by Australian composers of Lumsdaine's generation actually works. It concerns me even more that there are not more performances of a range of music that I consider essential; as a first-year music student the listening was of recordings, not live performances.

I was fortunate that my interest in Lumsdaine coincided with the opportunity to study in York, where Lumsdaine lives. I was also fortunate to be supervised for my PhD by LeFanu, whose knowledge of the man and his music is second to none. Although I saw David frequently, on only a few occasions did we discuss his music, a conversation that was made difficult by his withdrawal from composition in the mid-1990s. The upside was his willingness to discuss just about anything else, and I am grateful for his generosity in tolerating my daft questions and lack of knowledge (of literature, cinema, music, history, politics, the natural world…).

From a scholarly point of view, of particular use are his 'sketch books' from the 1970s, which document his compositional practice with clarity, in part because they were used for teaching. They are sometimes very methodical, setting out transformations of material in a way that a student could understand. Some pages relate directly to composed works, such as matrices for Hagoromo, and some are more about technique, illustrating different ways of building chords from a harmonic series, for example.

The works about which I have written were chosen mostly for practical reasons, principally the availability of recordings, and secondarily the availability of sketches. In recent years more of David's music has become available on CD, with some wonderful performances of his solo piano music by Mark Knoop and Peter Lawson. I knew early on that I wanted to write about the piano music, and with the exception of the Six Postcard Pieces, which are relatively straightforward and frequently performed, all the piano music is analysed in my book.

The first of his compositions that I wrote about was Kelly Ground, which is one of David's earliest acknowledged works, and also his most rigorously - and virtuosically - composed. It is his composition that connects most broadly to the European music of its era, and one can find ideas from Boulez, Stockhausen, Messiaen, Ligeti incorporated into the music. This is not to say that the music sounds like those composers, just as his music does not sound like birdsong, even though his knowledge of birds and their song is vast, and even though many of his works come from his experience listening to their calls and songs.

David's expertise in recording birdsong is highly regarded by ornithologists and not as well known amongst musicians as it probably ought to be. Some of his recordings have been commercially released, including several CDs on Tall Poppies (see: Australian Soundscapes volume 1, volume 2 & volume 3), and a recent double CD of birdsong alongside notated music on Métier. But a quick search of the British Library's Sound Archive for David's birdsong recordings reveals over 3000 items, dating from 1969 to 2010, all with detailed annotations and comments. Many composers have made use of birdsong, but very few have attained his level of ornithological expertise.

The most recent music that I discuss in the book is Cambewarra, one of his works that relates to a particular place, a place where he has recorded extensively, and which produced the soundscape Cambewarra Mountain. My concern in analysing the piano piece is for the ways in which motifs are formed, recalled and transformed. This is something that extends from his experience of birdsong in that place, but it has musical predecessors too, and it is important to me that the two compositions remain separate. I can't imagine needing the piano piece to make sense of the soundscape, nor the soundscape to make sense of the piano piece, even if knowing them both prompts new ideas.

I hope that my book will go some way to articulating his compositional preoccupations, detailing some of the ways in which his music is put together and exploring the aesthetics of his early work.

Australian musicologist Michael Hooper was born in Sydney and studied performance at the University of Sydney (BMus Honours, MMus). His PhD, on the music of David Lumsdaine, is from the University of York. From 2008 he was based in London, where he was a Research fellow and Lecturer at the Royal Academy of Music. Hooper is currently an ARC-funded Research Fellow at the University of New South Wales.