Hanging up my winklepickers

'Composing this album has had a profound impact on how I approach my other compositions', writes James Ledger about working on his new album of electronic music, Hypnagogia.

A few years ago I renewed an interest in electronic music and synthesizers. I had played keyboards in bands as a teenager and into my early twenties. The band I spent the most time in was a winklepicker-wearing, 1980s top-40 cover band called Strictly Business. I enjoyed trying to emulate the synthesizer sounds on those top-40 songs with my own synths. We played all over Perth and WA. I also played in an original band but we were constantly plagued by lack of rehearsal spaces and lack of drummers. At some point, I decided to hang up my winklepickers and focus on composition.

A few years ago, I bought an electric guitar as I wanted to find some new sonic possibilities for a piece I was writing. I got some pedals and soon became absorbed with the world of effects. This lead to playing guitar on a project with Paul Kelly. We recorded an album called Thirteen Ways to Look at Birds, along with multi-instrumentalist Alice Keath and Seraphim Trio. I learnt a great deal from Paul during the recording sessions (it was one of the first times that I had been in the actual studio as opposed to the control room).

Recording that album inspired me to make my own album. I blew the dust off my synthesizers from the '80s and I swapped my notation program (Sibelius) for a digital audio workstation (Ableton Live). This is probably not as dramatic as it sounds as I have previously incorporated electronics in several acoustic pieces.

The album is titled Hypnagogia (the lucid state between being awake and asleep) and each track is loosely based on that theme. In addition to synthesizers and drum machines, there is also electric guitar and pianos. I teach at the Conservatorium of Music at UWA, and I'm fortunate to have access to a beautiful Fazioli grand as well as a wonderfully banged-up upright with a bizarrely curved keyboard. 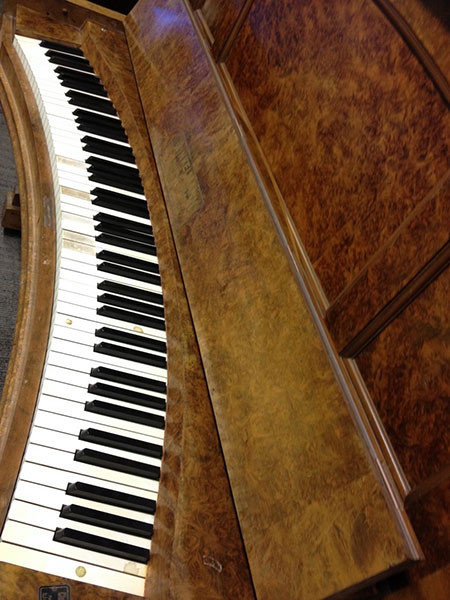 This piano features on a track called 5am Spring. It's a wonderful time of day and time of year, and the track is the most poppy on the album. The piano adds something between a microtonal and honky-tonk colouration to the pulsing synths. The track tips its hat to some electronic tracks from the '70s that I loved - Gershon Kingsley's 'Popcorn' and Jean-Michel Jarre's 'Oxygene'. Then there are the two title tracks. On Hypnagogia I, the piano is fed into a guitar pedal. It's a simple one-note line that gets pitch-shifted, delayed and reversed and then fed back on itself to create a cascade of slowly falling sounds. On Hypnagogia II, the guitar plays the same material as the piano in Hypnagogia I and is fed into the same pedal. This time, however, the original guitar sound is removed entirely - just leaving the imprint of the effected sound. The music here sounding very abstract and vague, like being in a dream. It's not until the end of the album where Hypnagogia I appears, now sounding more formed and concrete, as if emerging from sleep.

When recording Thirteen Ways, I learnt from Paul that each piece doesn't have to be perfect, it just has to capture something in performance. That's not to say to not strive for a great performance. Coming from a composer's point of view, a notated piece can very easily remain unfinished. It's easy to keep returning to the manuscript and make tweaks and adjustments. However, once it's captured in a recording and released, it feels final to me.

I have found that composing this album has had a profound impact on how I approach my other compositions. It is interesting to 'compose by performing'. Working with and manipulating actual sound as opposed to imagined sound is quite liberating. It allows for a very flexible approach to structure too. I spent so much time moving large chunks of sound around.

I'm now working on a second album. It's inspired by the Apollo missions to the moon. Hypnagogia is released on 30 October 2020.

> James Ledger - AMC profile. See also James's website to find out more and to listen to individual tracks of Hypnagogia.