Image: Beyond the Language of Zaum, Arnolfini Gallery.
© Justin Hockney

Caroline Wilkins writes about her vocal theatre work Beyonsense, based on Russian Futurist zaum poetry. This article is based on a paper given at an Arts and Humanities Research Council-funded symposium 'Music Composition as Interdisciplinary Practice' at the University of York in June 2016.

Beyonsense (2015) 1 is a vocal theatre composition based on Russian Futurist zaum poetry - zaum meaning 'beyond sense or beyond reason' - written for one to four voice(s) and comprising music, sound, staging, choreographed movement and masks. I'd like to make it the focus of this article as an example of a work that has evolved through a process of immediacy offered by different performance contexts. Coming from a background of both composition and performance, I have tended towards amalgamating these two disciplines in recent years, ever since my practice-based doctoral research into sound theatre from 2008 to 2012.

This combined role doesn't exclude the possibility of others performing such a work, as the score is clearly scripted and at the same time deliberately leaves room for interpretation. For me, the genre of new music theatre necessitates a process that allows for change and progression with each performance if it is to remain a living entity and challenge aesthetic boundaries. Collaboration with others, new technology and the increasing number of skills offered by performers, all add up to a shift in attitude towards authorship in favour of a more equal basis on which to work together as co-creators.

During the above-mentioned research period at Brunel University in Uxbridge (London), I became involved in the Design and Performance Lab2 run by Johannes Birringer and Michele Danjoux. With its emphasis on inter-medial play and encounters between performers and technology, this experimental environment proved ideal for both personal and collective research-as-practice. Our first performance project, Ukiyo: Floating World (2009), in spite of its Japanese-inspired theme, included some initial research into the Russian Futurists' experimentation with language in the early 1900s - zaum. An early precursor to Dadaism, this movement marked a radical break with traditional forms of poetic narrative, placing emphasis instead on the onomatopoeic sound of words, the suspension of syntactical meaning, and the reinvention of language. It was developed in particular by poet-performers Velimir Khlebnikov and Alexei Kruchonykh.

Out of the plethora of material generated by a laboratory context arose a duo performance piece entitled Zaum: Beyond Mind3 (2010), co-written and performed by another member of the DAP Lab, electronics composer Oded Ben-Tal, and myself. The piece toured to Belgium in 2011, where we met resident Australian/Russian composer Zachàr Laskewicz4, whose own work has been almost exclusively dedicated to the language of zaum. I initially encountered Zachàr many years ago during my residency in Cologne, when I had received an Australia Council grant to study composition with Mauricio Kagel. Coincidentally, the people from our performance venue, Stichting Logos in Ghent (Belgium), introduced me to some recordings of zaum made by a contemporary Russian poet, Valeri Scherstanjoi5, whose own work reflects the Futurists' concern with the material of language itself.

As a result of these various influences I began to research and develop a solo promenade piece based on a wider selection of Russian Futurist poetry. Its first title, Beyond the Language of Zaum (2013) gradually evolved into the present one, Beyonsense (2015). By this time, enjoying a post-doctoral phase of independent research, I combined the perspectives offered by a creative process and a performance experience in order to explore their mutual development on an interdisciplinary level. The very first performance of Beyond the Language of Zaum took the form of a work in progress at Bristol's Arnolfini Gallery in S.W. England.6 This opportunity came as something of a challenge to a composer/performer, the curatorial framework being centred not on music, but on poetry, voice and language. I devised a rough score-script as a structural guide for the promenade piece, leading an audience through different spaces of the building from the second to the ground floor, tracing a narrative from one level to the next by means of an open-plan, central stairwell. 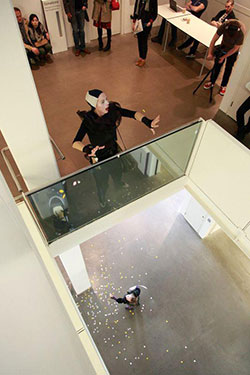 Beyond the Language of Zaum, Arnolfini (2013)
© Justin Yockney

Parallel to this I became increasingly involved in presenting talks on the subject of zaum and performance at similar venues in Bristol, in events held under the auspices of Tertulia7, a forum devoted to words and language. Out of this series emerged 'Writing Sound'8, the subject of a day conference that included both writers and composers. It was also at Arnolfini that I encountered the performance poet Jaap Blonk9, based in the Netherlands, whose work I had heard many years ago, and who gave me a recording of his interpretations of zaum poetry. Further opportunities arose to develop the material of Beyonsense as a result of performances in subsequent venues. Under the auspices of academic conferences, concerts, sound festivals and a festival of new opera10, I gradually defined the sonic, choreographic and staging aspects of the score, working them into a short, but cohesive, whole. 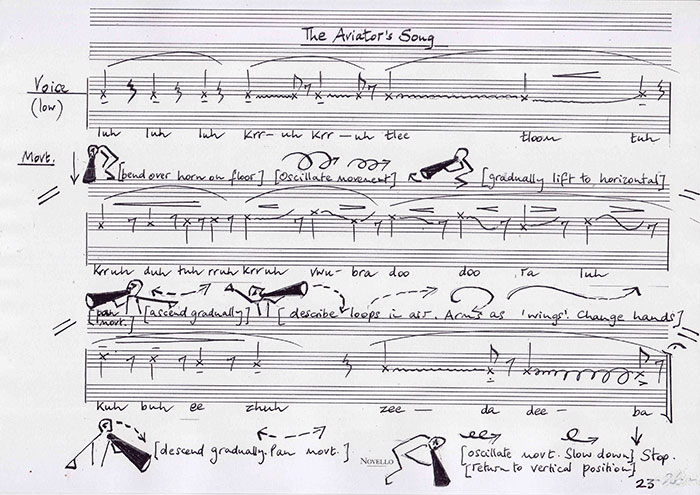 Score page of 'Aviator's Song' from
Beyonsense. Click to enlarge.

In tandem with these developments I rejoined the DAP Lab, this time as an external participant, in their next project, one that concerned the use of zaum language in a direct way. It dealt with a contemporary re-interpretation of the first performance art work to emerge from the Russian Futurist movement, Victory over the Sun11 (1913), with original libretto by Alexei Kruchonykh, music by Mikhail Matyushin and stage sets by Kasimir Malevich that comprised designs based on his famous Black Square paintings. Entitled for the time being / Victory over the Sun,12 this 'choreo-sonic opera' (Birringer) played at the Lilian Baylis Studio, Sadlers Wells, London in 2014.

Once again, the creative spill-over of ideas and possibilities offered by a design and performance laboratory provided ample material for me to develop on a personal level. I re-defined elements of a score-script that would comprise the next progressive step for Beyonsense, namely a structural basis for a work in three Acts. An inner dialogue was taking place between the performative and compositional aspects of my recent experience, between different facets of disciplinary engagement - such as sound, voice, movement, décor, costume design, music - that allowed for points of intersection to occur. To give an example, a 'Bird' character that I created under the auspices of the DAP Lab later became an 'Aviator' in Beyonsense. 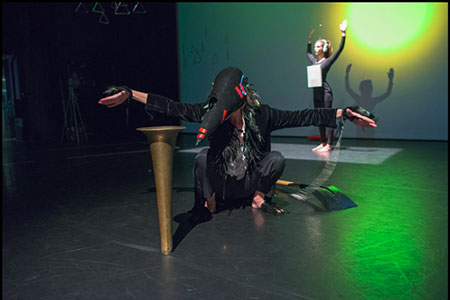 The 'megaphone' or gramophone horn used to amplify bird calls in the former context became part of an airplane machinery in the latter. The 'Aviator' vocalised into it as she 'flew', her voice recalling the sound world of industrial noise that belonged to the Russian Futurists. Other points of intersection occurred between the development of each character in Beyonsense, the demands of the libretto, and the dramatic narrative.

A re-examination of genre

As a composer/performer it seems vital to me that we constantly re-examine ways of approaching the highly complex medium of new music-/sound-/vocal-theatre in order to allow new forms to evolve that are in tune with social, cultural and technological changes. German composer and theatre-maker Heiner Goebbels emphasises the importance of splitting and restructuring elements that comprise the genre of new music theatre. For example, he challenges any assumed relationship between an actor/singer and their words/song, allowing instead for other possibilities to emerge. Another dramaturgical world is opened up at the moment where one is no longer represented by the other. The sound is not underpinned by the presence of an actor /singer's mouth movements onstage: 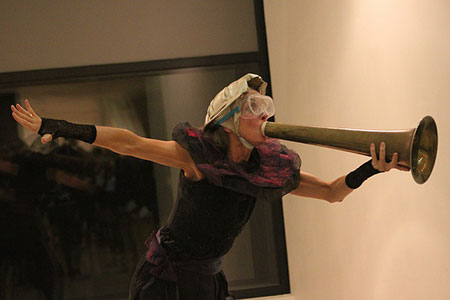 If I say I'm interested in text not only as material for the singer and actor, the opposite is actually the case. Onstage I try to antagonise or split the identity between language and speaker/singer, making the latter disappear for two reasons: to develop an autonomy between hearing and language (text as body) and to gain a performer as a second autonomous body. (Goebbels 2002: 70, my translation)

At an early phase during his work process, Goebbels separates the visual staging of a piece from the acoustic one in order to examine the determining roles involved within each. Factors such as lighting are considered as an essential protagonist within the dramaturgy of the work and not merely added on towards the end of the rehearsal period. Likewise, the nature of a sound source and its chosen method of amplification are decided according to the same principle.

Returning to my own experience of both an academic and an artistic framework in which to create interdisciplinary work, it seems vital to insist on conditions that allow for that project's supportive emergence. Exposure and constructive evaluation by an invited public, workshop presentations run by organisations, pop-up operas within festivals or experimental concert platforms, can all encourage practice-as-research to extend beyond the realm of academia, and thus challenge artistic norms within the general public domain of performance. Some examples of the above include London's 'rough for opera' series13 and Tête-à-Tête Festival of New Opera (see footnote 10), Rotterdam's Music Theatre Now forum14, and Munich's Biennale of New Music Theatre15.

In this light I would propose the pursuit of certain methodologies in order to expand both means and resources amongst practitioners of new music theatre, including:

These concerns are reflected by the recent artistic directors of the above-mentioned Munich Biennale of New Music Theatre in the following quote16:

…opening up and protecting the art realm as a place for research. (…) The spectrum of a new music theatre format is reflected by social 'multilingualism' and everyday media polyphony. It's an open field in which social and political investigations can be included. (Manos Tsangaris, Daniel Ott, 2016)

The first phrase, in particular, reflects the importance of a line of continuation, exchange and dialogue between laboratory work and a public presentation. It brings into question current divisions between process and product. The statement as a whole challenges deep aesthetic questions concerning the actual notion of a 'work'; it aligns the framework in which artistic practice takes place with the underlying political choices made on the part of those practitioners.

Undertaking a period of practice as research after many years' career as a composer, I experienced an enormous shift of perspective with regard to working methods, authorship and creative process. Encounters with co-artists, new technology and inter-disciplinary networks all contributed towards a change in my approach on a fundamental level, one in which the onus, for me, is now laid on performativity:

'the performative turn […] as a radicalisation of the performative aspects of art in order to reinforce the materiality or expressive qualities of the aesthetic utterance' (Kattenbelt 2010: 33).

---. (2014), for the time being / Victory over the Sun, dance opera, http://people.brunel.ac.uk/dap/forthetimebeing.html

Independent composer, performer and researcher Dr Caroline Wilkins comes from a background of new music performance, composition and theatre, and has worked extensively on solo and collaborative productions involving these. Her particular interest lies in creating new forms of presentation, whether in the field of inter-medial sound theatre, sound poetry or performance art.