by Shan Deng and Maria Grenfell

In 2010, Tasmanian-based musicians Maria Grenfell (composer) and Shan Deng (pianist) embarked upon a unique research project together. The aim was to create a set of pieces for pipa (Chinese lute) and piano, based on traditional Chinese folk tunes that would be 're-composed' as new Australian pieces for this relatively unusual combination. The third and most essential member of the research team was to be Shan's father Dr Wei Deng, pipa master, who is based in Brisbane. The result of the collaboration, Five Songs from the East, was completed in April and performed and recorded for CD release later in 2012.

The tradition among some early twentieth-century composers (such as Bartók, Kodály and Vaughan Williams) to collect and use folk music in their compositions created a whole new genre in Western music. Maria Grenfell and Shan Deng decided to build upon this approach for their own project using an unpublished collection of Chinese folk songs.

Shan Deng was granted special permission to access the closed collection of Chinese folk songs at the Chinese Institute of Musicology in Beijing. Several thousand unpublished folk songs were collected in various forms in the 1950s, and these exist at the institute as either tape recordings or transcriptions in Jianpu-notation (numbered musical notation). This exclusive collection is unavailable to other Western musicians, but, as a special privilege, Deng was given unlimited access - the Institute was established under the direction of her grandfather Li Yuan Qing.

Born in China, Shan Deng is able to read Jianpu-notation and already has an understanding of Chinese folk music. In January 2010 she travelled to China, and returned with a set of folk songs that she transcribed from original tape recording or Jianpu-notation into Western notation.

Chinese music performed by Western instruments is, to date, presented to the West in a simplified way, often as arrangements: for example, 'The 30 Famous Chinese Piano Pieces' edited by Wei Tingge. Chinese music is also emerging onto the Western stage through a number of virtuosic musicians playing Chinese instruments. Liu Fang, a musician on pipa and guzheng (Chinese zither), has created an international career as a performer of Chinese traditional music. This shows an increased interest in the West in Chinese traditional music and instruments.

A number of Australian composers have incorporated ideas from Chinese culture in their music, including Peter Sculthorpe, George Dreyfus, Richard Meale, Liza Lim, Larry Sitsky, and Julian Yu. There is even a small number of Chinese music ensembles becoming active in Australia, such as the Australian Chinese Music Ensemble in Melbourne.

The folk songs chosen by Shan Deng during her visit to the Institute arrived in hand-written form, some with distinct titles and some that were able to be interpreted thus: 'Singing mountain song', 'Green willow', 'Shoo-shoo bird', 'Lao Yo West Song', 'Drummer music', 'Purple flower', and 'Six beat song'. 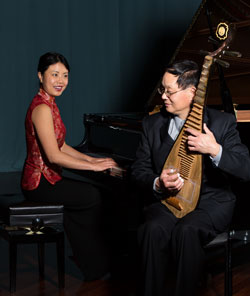 Composer Maria Grenfell was faced with two challenges: first, to learn the basics of how to write for pipa, and second, to 're-compose' several of the folk tunes into new works in her own compositional style, while retaining elements of the Chinese music. She was fortunate to be able to spend two full days in the company of Wei Deng, listening to him play, and learning about notational aspects of pipa techniques. Most helpfully, she also had access to Wei's PhD thesis, entitled 'Historical and Stylistic Development in the Chinese four-stringed lute pipa and in pipa music from 1800 to 1995' (Deng 1996, vol.1, unpublished PhD dissertation). Once she became more familiar with writing for the pipa, she began work on the first piece, 'Little Bird' (based on 'Shoo-shoo bird').

The creation of new works featuring cross-cultural elements is significant in Australian music and begins to embrace the musical influences of many cultures within the community of Australian musicians. The idea that Australia is a cultural 'melting pot' is not new. However, Australian music continues the Western art music tradition of Europe, and its composers and performers are trained to write and perform music using a system of notation and performance practice that is around 1000 years old. The Chinese oral tradition, with its aural and musical features, on the other hand, is several thousand years old and has only relatively recently begun to be notated in the Western musical tradition so that it can be performed outside the Chinese musical environment. The idea that these new pieces would potentially create a link between Chinese folk music and Western classical music is an important feature of the project.

Little Bird, the first piece in the cycle, was completed in April 2010 and performed at the Encounters festival at Griffith University in Brisbane shortly afterwards.The four-day festival and symposium traced musical meetings between Australia and China through concerts, theatre, photography and film events. It explored the rich but relatively unknown history of intercultural encounters, confrontations and exchange between Australia and China.

The collaborative process between composer and performers was one that took somewhat longer than planned. In 2011 Shan Deng went on parental leave for most of that year, so the project took a break, and some time lapsed between completing the first two pieces and finishing the entire set of five pieces. However, this gave Grenfell some rare time and space to reflect on the writing process, as well as pursue other compositional work that, curiously, had subconsciously come under the influence of the Chinese project.

In June 2010 Maria Grenfell was a participant at the Music X Festival in Blonay, Switzerland, where she had a piece performed that was based on the 'Shoo-shoo bird' melody, written for expanded forces of two flutes, percussion and piano. The piece was titled These dark notes drifting, a line from 8th-century poet Li Po, from whom Grenfell has derived musical inspiration in the past (Poems of a Bright Moon for flute/alto flute, clarinet and piano, 2000). By the time the fourth and fifth pieces were completed in early 2012, she had incorporated several elements of improvisation and simple aleatory in her work, which had not recently been a feature of her musical language. While this feature was eminently suitable to the traditional pipa technique mastered by Wei Deng, for Shan this was a new element to her performance.

For her, the two most challenging aspects of learning the pieces were rhythmic pulse and improvisation. Chinese traditional music is played with rhythmic freedom, with time given to include ornaments and tone slides. Little Bird presented the biggest challenge to rehearse, as the piano part is written with semiquavers in an irregular pattern, almost opposing the rhythmic pulse established by the pipa melody. Therefore putting the two instruments together required many hours of metronome and counting practice separately and together.

For a classical musician accustomed to performing music where every element is notated in detail, Conversation - the 3rd work in the set of five - presented a new experience in improvisation. Many ideas and possibilities were tested, and in the rehearsal process Shan and Wei discussed imitating the guzheng (Chinese zither). The final result incorporated legato arpeggios with sostenuto pedal, as well as repeating and expanding the original melody on both instruments.

Another non-standard technique called for in Conversation and Blossom (the fourth piece in the cycle) was plucking the strings inside the piano. Shan experimented with different methods of plucking, such as using a credit card, and trying the plastic false nail that Wei Deng uses on his right hand fingers to pluck the pipa strings. Ultimately, just using the fingers produced the warmth of tone colour desired, and the result was a well-balanced sound with the pipa and resonated its timbre.

Balancing the sound for performing and recording required amplification for pipa, resulting in a warmer tone. The piano is a big instrument with a projected sound, while pipa is much smaller in volume and more intimate. Using amplification was also very effective when the piano plucks the strings in Conversation and Blossom.

The project, which was begun in 2010, is nearing completion at the end of 2012, with the five pieces for pipa and piano written, performed, recorded for CD release and broadcast. The evolution of the pieces took shape as Shan and Wei Deng met several times during the course of the two-year period to rehearse, with the most intense period of work being after April 2012 when Five Songs from the East was complete.

The five songs - Little Bird, Tree Song, Conversation, Blossom and Lao Yo West Song - were performed in concert on 28 September 2012 at the Conservatorium of Music, University of Tasmania. Shan Deng and Wei Deng each played two traditional Chinese pieces first to contrast the different sound characteristics and compositional techniques between them and Five Songs from the East. As an encore, Grenfell and Wei had arranged Click Go the Shears for piano and pipa, playing an Australian folk tune on a Chinese traditional instrument to show the reverse process.

The collaboration that resulted in Five Songs from the East yielded fascinating results both from a musical and a personal perspective. Maria Grenfell had never written for pipa so it was a rare opportunity to explore and write for a non-Western instrument in the presence of a true pipa expert in Wei Deng. Having a long-standing interest in incorporating folk elements in her own music, she was able to combine her Western compositional language with the musical features of Chinese folk tunes and the timbral qualities of a traditional instrument, going further than simply being inspired by myth, legend and atmosphere.

A classically trained pianist in the Western tradition, Shan Deng found the project a unique opportunity to learn more about traditional Chinese folk music and how to play with a pipa, an instrument that focuses greatly on improvisation and free rhythmical playing. She was also able to work closely with her musician father for the first time, and he shared many reminiscences of his studies at the Beijing Conservatory and his musical experiences in a time of political and artistic upheaval in China, before his migration to Australia for a better life for his family.

This unique project enabled three Australian-based musicians to find a new shared language together, supporting a common goal in performance-based research and creating new Australian compositions in the process.

Maria Grenfell is Senior Lecturer and Co-ordinator of Composition at the University of Tasmania Conservatorium of Music.