Insight: 'Wake Up' by Clocked Out

by Vanessa Tomlinson and Erik Griswold

Image: Griswold and Tomlinson, during 'Wake Up!¨' performance in Brisbane in March 2011
© Sharka Bosakova

'Insight' is Resonate's new series of features, in which the AMC's represented artists take a close look at some aspect of their own work - a tour, a collaboration, a project, an individual work of art. Erik Griswold and Vanessa Tomlinson give us the first insight into Clocked Out's current collaborative project Wake Up!.

On Wednesday 23 March Clocked Out presented Wake Up! - a performance that promised: 'the sharp trill of an alarm clock launches Clocked Out into 2011. It's time to wake up to the everyday sounds around us with special guests Joel Stern, Lawrence English, Nicholas Ng, Jan Baker-Finch and more.'

An older press blurb, published on the Griffith University events site, had promised this: 'Clocked Out invites you to Wake Up! to new sounds. In a new concert-length work, the duo extends its instrumentation from prepared piano and percussion to include a set of alarm clocks collected on a road trip across Australia. This is acoustic morphing at its best.'

Wake Up!, as a concert-length production, was a brand-new concept for Clocked Out, one that was only truly revealed in the moment of performance. Reflective understanding began at 7.45pm on Wednesday night, just after the concert's conclusion. A month earlier there was panic in the makers' studio as the idea for the content of this new work had run out of steam. It was originally thought that, during a car trip across Australia, a large number of alarm clocks would be collected from op-shops, and the concert would be an examination of acoustic morphing between these sound sources and the territory of Clocked Out - prepared piano, found objects, toys and percussion. It was to be a fantasy of sound, with seemingly impossible solutions to sonic conundrums. 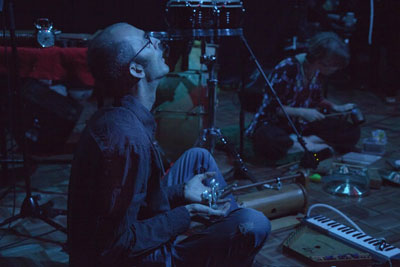 But, as it turns out, op-shops in the Outback don't have a lot of alarm clocks, and the search for them soon wore thin. And the performance possibilities of alarm clocks soon showed their limitations, as did their acoustic variability. The plan had to be rethought.

Reacting to an increasing sense of anxiety, we quickly hatched a plan to invite a series of guests, in the hope of injecting some fresh perspectives into the event. We immediately thought of a group of artists with whom we had initiated a series of intriguing exchanges over the past few years. The past collaborations were of a highly experimental nature (read: we were not yet sure what was going to happen so did not know how to tell people about it), or were situated in remote locations (Wivenhoe Dam, Condamine River) and so weren't widely known to our local audience. We added to this the criteria that all works be thematically unified through association with morning, awakening, passing time, dreams or sleeplessness. Enter our four guests and a new drive to understand the work.

At this point there is an evolving logic, but the central character - Clocked Out Duo - still needed to create new work and be involved in all the work with collaborators. Given a deadline of a pre-Wake Up performance ('Soft soft loud loud' in Fremantle), we managed to come up with a new 15-minute work based around the original alarm clock idea, featuring 'So rehearsals are not so much about practising music. They are about building sound...'pre-recorded clocks and different relationships of time. Found objects such as Forstner bits (from a circular saw) became a central through-line, thanks to a gift from a friend, an accidentally discovered lopsided bossa groove, and a series of wooden planks helped define a setup, which in turn helped define piano preparations. The combination of found objects and piano is a circular affair with neither being able to be fully constructed until the other is known. They reference each other in pitch and timbre - expanding, or morphing into each other - and the complimentary nature of this newly formed combination timbre is the essence of Clocked Out's sound world. Once the world has been constructed, the music inside that instrumentation can be 'sounded' in an improvisatory exploration. So rehearsals are not so much about practising music. They are about building sound.

Other concepts were also falling into place, literally, as it turns out. A Clocked Out favourite, Spill - in which 20kgs of rice pours from a swinging pendulum-like cone over an assortment of sounding objects - was written by Erik Griswold in 2008. The work has had a number of versions, including forming the finale of the circus show 'Fake It' (Hoopla Festival, Sydney 2010 with Nikki Robbins, Chelsea McGuffin and Vanessa Tomlinson). The dada-inflected circus rendition inspired us to enlist eurythmist Jan Baker-Finch to perform in yet another recasting of Spill. In her version, the performer herself becomes a 'prepared performer'; bending, stretching, and otherwise placing parts of her body under the continuous spill of rice grains. In this version the performer now articulates the fall of the rice, examining its sounding possibilities by transforming and interrupting its fall. The idea of a swinging pendulum resonated with our 'clock' theme, while the endless stream of rice suggests, perhaps, an hourglass, the relentlessness of time.

Lawrence English has been sweeping the globe in search of its most compelling sounds, which have become the material for his intriguing recordings, performances and installations. We asked Lawrence to assemble a collection of his favourite morning sounds, and he obliged us with his extraordinary recordings of waking up in Antarctica, the Amazon and dawn chorus at the more local Bunya Mountain. These we combined with the live soundscapes of Clocked Out Duo, using an approach we've developed in site-specific performances with Richard Nunns, Jane Rigler, and others at remote bush locations. This approach incorporates an array of sound sources including toys, found objects and natural materials, using a variety of techniques mimicking natural processes, including dropping, rubbing, and scratching. The goal for us in this kind of electroacoustic improvisation is a seamless blend of finely filtered acoustic sounds with field recordings; a seamless blend of three performers using starkly different material. Perhaps this is the acoustic morphing we were searching for with the alarm clocks.

Work with Joel Stern was evolving in a completely different direction. Initially the concept was for Erik and Joel to perform a set of works for foot pump-operated sound makers and other toys, based on an earlier collaboration at Brisbane Powerhouse. After exploring a few other possibilities, this somehow evolved into the idea of light operated synthesisers projecting onto ropes - forming a kinetic sculptural work - which then evolved into a light/sound show with accompanying antiphonal bass drums and snare drums. Performed in the dark, with hand-held 'disco' lights, this work in the end had a club feel, exploring a different dimension of the 'wake up!' theme.

Our collaboration with Nicholas Ng had a notated starting point. Given our renewed enthusiasm toward Chinese music (Clocked Out had just returned from Chengdu, China and an inspiring tour of our large ensemble project 'The Wide Alley') we decided to arrange an early morning song from the cake-selling man for erhu, piano and vibraphone, and then to mix in a couple of favourite tunes from 'The States' (presented at the Judith Wright in 2009) for bass melodica, melodica and erhu. The music was difficult - needing precision, lightness and extreme skill to execute. The programming of this right before the more sonically indulgent set with Joel was really important to us, in that it juxtaposed two extremes of our musical interests.

To round out the show, and because we had been looking backwards, we decided to go back to the year 2000 when Clocked Out first began, and play an old tune of Erik's - Every Night the Same Dream. It was interesting in itself to relearn an old semi-notated work that we had performed more than 100 times across around 15 countries but not revisited in around five years. But it was also interesting to note how our style of composing and learning music had evolved. This work was very particular, with endless tempo changes, timbral shifts and a particularly idiosyncratic form. It was mostly pre-composed with limited scope for improvisation. And it was for piano and stand-up drumset - not prepared piano and found objects. This was not so much about sounding the instrument, but rather about sounding the idea - with a much stronger emphasis on rhythm and form.

Erik had the idea for weeks about including an ice sculpture in the performance to activate the sonic environment of the recital hall, and also to introduce a chance element into the performance. It was just a question of engineering. After a few failed attempts, we drew on the work of Japanese-American artist Mineko Grimmer, creating a hanging structure filled with crushed ice and small aquarium pebbles. As the ice melts, the pebbles become dislodged and drop onto a sculptural array of small percussive instruments. In the course of the performance, pebbles would sporadically drop, poignantly punctuating moments of silence or adding a surprising tag to the ends of particular pieces. It is hard not to notice when a small pebble plings onto a toy piano tyne in an otherwise silent moment - it changes the shape of the space and the perspective of all involved. Suddenly both performers and audience are listeners together, unsure of what will happen next. Our technical manager Cameron Hipwell managed to create a visual world around our instruments that included this sculpture and the rice cone, plus four discreet instrumental stations including a prepared and an un-prepared piano.

Suffice to say we now had a show, an order, and a plan to present these elements. The only thing was we still did not know what it was we were making. This is what we love about performance - the emotional effect of one piece followed by another only becomes apparent as it is happening; the flow of time, the surprise of the ice-sculpture punctuations, the juxtaposition of ideas, unimagined relationships between pieces, what the total journey may be.

For ten years Clocked Out have produced some of Australia's most innovative contemporary music and interarts projects. Through their varied collaborations they have sought to bring together musicians, performers, artists and audiences from diverse backgrounds. By following their creativity to unexpected places, their work has explored the boundaries between musical styles and artistic disciplines. In their core group Clocked Out Duo, directors Erik Griswold and Vanessa Tomlinson have made piano, percussion, and toy instruments their sonic playground.