Gwen Bennett's biography of Ken Tribe, More than music: the life and work of Kenneth W Tribe AC, was officially launched on Monday 19 March, in a special event hosted by Musica Viva and the Australia Council for the Arts.

News Limited CEO, Kim Williams, stated that he had promised 'not to cry' when launching the book about his close friend and colleague. Williams spoke strongly about Tribe's importance in shaping the musical landscape in which Australian artists, ensembles and organisations operate today. 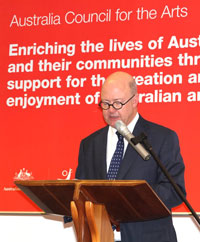 It was a similar emotional tribute by Williams, at Tribe's 80th birthday celebration in 1994, which inspired Gwen Bennett to write her biography. At the launch Bennett described her enjoyment in researching and writing the biography, which utilised almost 6,000 hours of recorded interviews with Tribe himself, family, friends, colleagues and many of the musicians whose lives he touched.

After some difficulty in finding interest from a publisher (which Bennett suggested was '…fair enough, as Ken was not a sporting hero or a film star, nor did he have a sleazy sex life…'), she teamed up with the Australian Music Centre in 2010 to publish the work. According to her, this was a special project for all involved, as '…Tribe was one of a group which included Don Banks and Jamie Murdoch who pushed for the creation of the AMC in the 1970s, during the time of the first Australia Council and the first Music Board'.

Bennett's book covers Tribe's tireless work for music and the arts, and explores his life from early childhood until his death in 2010 at the age of 96. According to Bennett, 'Ken Tribe AC was an integral part of major developments in the arts in Australia for 50 years after World War II, particularly - but not only - in the field of music. His influence on the cultural life of the country cannot be overestimated in the light of his 40 years at the artistic helm of Musica Viva, his pivotal role in formation of policies for the first Australia Council, his support of living composers and performers and much more. He also spent 40 years working for the deaf.' 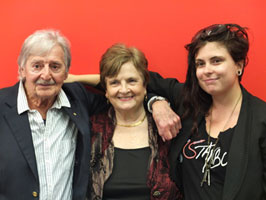 Many of Tribe's close friends, family and supporters attended the launch, and the Goldner String Quartet closed the event with a performance of the final movement of his favourite Beethoven String Quartet, Op. 18 No. 3.

Janine Marshman is the AMC's Online Business Manager. She has a background spanning business and marketing and the performing arts: she has a Master of Commerce, majoring in marketing, and a Bachelor of Arts, majoring in music performance, both completed at the University of Sydney.