I first began thinking about collecting and playing lullabies for adults in 2011, a year after moving back to Australia after working for many years as a violinist in the Netherlands. I wanted music that would soothe but also intrigue people since we often struggle for balance in our busy and stressful modern lives. I raised the project idea with the pianist, Tamara-Anna Cislowska, in the course of our concerts together. She was enthusiastic, being a champion of modern works, and also because she had recorded her own CD, Persian Hours, with complementary piano works.

I liked the concept of a genre that integrated older and newer works in a seamless flow of differing colours and textures so I set about finding older but lesser-known works from the repertoire for violin and piano. But I mainly also sought out composers I knew both in Australia and abroad who I thought might find the idea appealing. I explained the theme and left it to them - and was thrilled when I later received such varied and innovative compositions. I really could not have hoped for more generous and better outcomes from these busy composers!

I also imagined a concert program with a visual dimension added to the music. So I asked a great friend of mine, Isabelle Vigier, a French visual artist living in Amsterdam, if she would add text and images. She made film using a variety of historical images and lullaby texts. Lullabies often have powerful texts that conjure up poetic images. I wanted the audience to enjoy listening but also to deepen their experience with the help of pictures and words. Isabelle imagined the film as the third 'person' in the performance, in addition to me on the violin and Tamara on the piano. 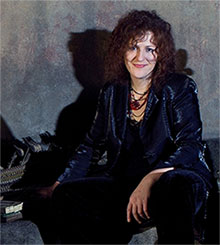 So far, we have performed this concert at the Port Fairy Music Festival, Mona Foma in Hobart, the Peninsula Music Festival on the Mornington Peninsula and at Duneira in Victoria. The performances have been well received and we have been able to reshape the program to suit different audiences and venues. I always enjoy talking afterwards to audience members about their 'favourite' pieces, as there is one for everyone.

The older lullabies we chose were by Ravel, Enescu, Sibelius, Szymanowki and Stravinsky. For example, the Stravinsky piece from the Firebird Suite is rarely played as the violin part, arranged by Stravinsky himself, has some difficult harmonics that can sound harsh but add a huge amount of colour. Violinists usually play other versions that are more embellished and 'oriental' sounding. The Ravel lullaby was written as a tribute to Fauré and uses the letters of his name. The Sibelius lullaby is really a very beautiful one and a classic lullaby. The Enescu is a lullaby taken from a longer set of pieces that are impressions of childhood.

Among the modern works, Peter Adriaansz, a Dutch composer who I worked with in Holland, sent me an original and conceptual work that is hypnotic and atmospheric. A palindrome, it reverses direction halfway and feels like a yoga exercise to play. Peter acknowledged that while it is rather unusual for a lullaby, he was 'an unusual child'. The work by David Chisholm, somewhat dauntingly titled Axeman Lullaby, is a fragment from a dance piece.

Elena Kats-Chernin, who also works regularly together with Tamara, sent us a piece that she had actually composed as a young child, her opus one, but had never actually put down on paper as an adult. Graeme Koehne arranged for us a lullaby fragment from his children's opera Grandma's Shoes. A piece for prepared piano and violin by my partner, Cor Fuhler, has small mechanised music boxes in the piano that pluck the strings, and has an improvisatory quality being made of 18 components that can be played in any order. Cor called the piece 18 Spoonfuls after memories of feeding our two kids endless spoonfuls as toddlers. The piece is extremely textural but I find also contrasts well with the Szymanowski, which is from a different time period but has a rich texture.

Kate Moore sent us Broken Rosary about her childhood memory of breaking her grandmother's rosary beads on a hot day with the fan blowing overhead in the bedroom. It is a multi-tracked piece on the CD, and in our concert performance we have a fan that blows a glass bead mobile, made by my children, that creates the tinkling effect. 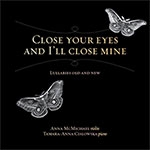 Andrew Ford wrote a tragic lullaby in memory of the young violinist, Richard Pollett, killed in a bicycle accident in Brisbane. Brett Dean's piece is the 'Berceuse' from his suite Berlin Music. I was very happy to receive another Berceuse from the wonderful American multi-media artist, the iconic Robert Ashley, who I had worked with previously. He sent a 'standard' for us to arrange and urged us to 'embellish as we see fit'.

The final lullaby is by the Korean composer, Seung-Ah Oh, who I knew in Holland and who is now teaching composition in Chicago. She wrote us a quite heavy, filmic sounding lullaby based on the intense Korean traditional singing of lullabies she remembers as a child.

Belinda Webster recorded the CD for us, just released in January 2014 on the Tall Poppies label. We are also working on a DVD/book package of selected music and images for the Dutch label, Unsounds. One audience member remarked how thoroughly we had delved into the lullaby idea so I hope this proposed package will reflect that research and be enjoyed by many people for many reasons.

Anna McMichael is an Adelaide-raised violinist who returned to live in Australia in 2010 after 17 years in Europe performing in many major ensembles and orchestras. She has performed at many European music festivals with a number of Dutch chamber ensembles and toured extensively with groups such as the London Sinfonietta, Amsterdam Sinfonietta Chamber Orchestra, Nieuw Ensemble, ASKO/Schoenberg ensemble, Netherlands Chamber Orchestra, and the Royal Concertgebouw Orchestra. She has recorded for a number of European labels. Anna McMichael has performed extensively in Australia and is Co-Director of the Tyalgum Music Festival.