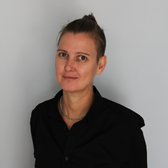 Meeghan Oliver is the Australian Music Centre's Library and Music Resources Officer, who has over ten years of specialist library experience under her belt. She holds a Bachelor of Arts (Hons) and a Graduate Diploma in Library and Information Studies, along with qualifications in music business administration and sound engineering. Meeghan has a keen interest in many genres of music and has played in punk and rock bands for well over 20 years. She currently plays bass guitar in an alternative rock trio called Hoax Trinket, and an experimental electronica act Deprogram.

Find out more about Meeghan's role and some of her highlights of working at the AMC.

Describe your role at AMC, when did you join the team?

I joined the AMC in September 2019 as Library and Music Resources officer. My role includes but isn't limited to, the documentation of scores, performances and audio releases of our represented artists. I catalogue artists' work for our website, but also allocate an International Standard Music Number (ISMN) for inclusion in the international database of musical works. It's important for composers works to be documented and added to the archive of Australian Music history. I also help with the hiring of Orchestral Parts for performances worldwide and of course, when a member wishes to borrow a score or audio of something we hold, I do the traditional librarian thing and circulate loan copies.

What is your favourite thing about working with the AMC?

I'm the AMC liaison for the Ngarra-Burria First Nations composers program which is an initiative close to my heart. I get to witness Indigenous composers, some of whom wouldn't normally venture into the art music world for whatever reasons, work with established composers like Dr Chris Sainsbury and gain exposure to these traditional western instruments and rules and create amazing music by fusing their own established styles with instruments they wouldn't have touched if not for Ngarra-Burria. Some of these composers come into the program already adept with traditional classical instruments and styles but for me, those who are coming from the folk or hip hop or blues world - the non-notated music world - these artists are making music that is fresh and exciting and powerful.

What's been playing on rotation for you recently?

Andrea Keller, Sam Anning & Shannon Barnett released Between Panic & Peace recently and that has been on high rotation since I first heard it. I'm very eclectic in my taste, some artists I've been listening too recently include; Baarka, Delay 45, Battles, the Saints, Boudicca, The Buoys, Haitus Kaiyote, and Cat Hope.