Writing a work of music based on a psychoanalytical personality profile of fellow human beings is not something many composers attempt during their creative lives, but this is the unusual challenge four composers from the Sir Zelman Cowen School of Music at Monash University embraced last year. The project Lebenslinien 9 (Lifelines 9) was led by guest teacher Dr Stefan Hakenberg from the Musikschule in Darmstadt.

In 2015, Monash University invited composer and director of the Musikschule in Darmstadt, Dr Stefan Hakenberg, as guest teacher in music composition. He worked with four young composers on a project called Lebenslinien 9 (Lifelines 9), which involved the creation of four new musical works based on psychoanalytical portraits. Lebenslinien is a concert series initiated in 2007 by the visual artist Inge Besgen with the underlying idea of presenting musical reflections of the life of people living in the city of Rüsselsheim in Hesse, Germany.

For each concert, Inge Besgen interviews four people and these interviews form the basis for personality profiles created by psychoanalyst Dr Rainer Paul, which in turn become the psychological blueprint for original musical works. Dr Hakenberg worked with Australians Hayden Dun, Natalie Jeffreys, Natasha Pearson, and Daniel Aguiar to develop strategies that would allow for the creation of musical analogies of these personality profiles. The four composers wrote their Widmungskompositionen (dedication-compositions) over a period of six weeks, and three of the composers were able to travel to Germany to attend the premiere of their pieces on 2 December 2015 by the Ensemble Phorminx, with Alwyn Tomas Westbrooke (violin), Thomas Löffler (clarinet), and Markus Stange (piano). The concert was attended by the four interviewees from Rüsselsheim. 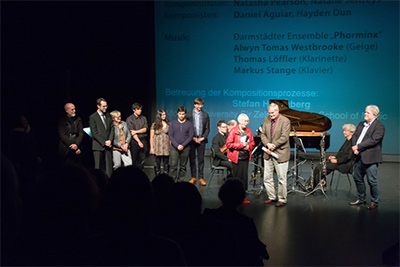 Hayden Dun, Natasha Pearson, and Daniel Aguiar (4th-6th from left)
at the premiere of their works at the Theatre Rüsselsheim. View a larger image.
© Horst Ziegenfusz

The musical tracing of an emotional map in the form of a psychoanalytical personality profile would be a steep call even for the most experienced of composers, let alone an undergraduate student, but this was precisely the challenge for the four young composers. Even prior to the drafting of musical ideas, the composers had to investigate what it might mean to live one's life in Germany - a country marked by historic events such as WW2 and the recent influx of around a million refugees. These events are clearly not part of the experiential horizon of young Australians, but maybe there is some common ground in terms of the emotional worlds associated with such events.

Keeping in touch with her own emotions, Natalie Jeffreys projected her own life experiences onto those of her interviewee in the hope that this would create enough resonance for a coherent musical portrait. After initially focussing on differences, Daniel Aguiar realised that he and his German counterpart responded in a very similar way to stress, which gave him an emotional connection from which to proceed. There are many valuable learning outcomes in all of this, maybe above all a growing awareness of music's capacity to reflect existential concerns and associated emotions. In a project of this nature, music is more than just organised sound. Here, music has the potential to signify the emotional essence of our experiences, fears, and desires more accurately than natural language.

Another more obvious outcome for the four composers was of course the opportunity to have their music rehearsed and performed by some of Germany's leading musicians of contemporary Classical music. The performer feedback on music notation and musical expression will stay with these students for the rest of their life. Equally beneficial would have been Stefan Hakenberg's input and guidance. He is a composer who comes with a wealth of experience in teaching and community-based composition. It is thanks to Inge Besgen's vision and his initiative that this project has come about.

Monash University, Zelman School of Music (artsonline.monash.edu.au/music) - see also: a news article about the Lebenslinien 9 project on the University website.

'Lebenslinien: Vier musikalische Pychogramme' - a review of the concert in the regional paper Main-Spitze (in German)