My meeting with Hellgart Mahler

Dominic Flynn writes about his recent meeting, in Tasmania's Devonport, with composer Hellgart Mahler, as well as some of the 90-year-old composer's music.

During my time as a music student in lutruwita/Tasmania, I noticed a common underlying assumption that if young musicians such as myself were serious about our craft, we had no choice but to eventually leave the state. Exactly where we were expected to go also generally fell into stringent assumptions that often focused on the proficiency with which dominant institutions could produce 'music professionals' - typically in Melbourne or Sydney, and, occasionally for the most ambitious and/or financially well-off students, further afield in Europe or the US.

This seems to have been a common expectation for 'promising musicians' (a pernicious notion in itself) for as long as musicians have been 'promising'. I've found that this attitude is reflected in much of the academia surrounding music-making in regional areas versus the handful of prestigious epicentres, which often frames the former as mostly the domain of community outreach, social benefit and the self-taught artist, and the latter (inferred as more important and serious) of artistic excellence and the musical canon.

However, autodidactism is sometimes a necessity, as not everyone is equally afforded the luxury of the kind of travel or living situation I felt was expected of us young musicians. Even those who do have such options may still choose to forego the expected path. Questions are then raised about this trajectory in times of an economic recession, a housing crisis, or a pandemic. I have returned to Tasmania from abroad twice due to the ongoing COVID-19 pandemic or related financial hardship, the ability to do so being a luxury itself. At the time of writing this, the two largest cities in Australia are slowly emerging from extended lockdowns resulting from outbreaks of COVID-19 and have been in and out of said lockdowns since the beginning of the pandemic. This has added overwhelming complexity to the topic of music and place. Beyond the initial headlines of mass exoduses from the larger cities, the long-term effects remain to be seen.

Though there are benefits to being within reach of a larger number of resources and like-minded collaborators found in these epicentres - particularly for marginalised artists - the problem lies with the assumption that operating outside this norm (by choice or otherwise) is some kind of failure in itself. A decentred approach to music-making that encourages the choice of autodidactism, and where more artists are able to find creative fulfilment outside the hegemony of traditionally respected hubs, has been made increasingly more possible and appealing through advances in communication technologies and been expedited by the ongoing pandemic - during which time much work has been undertaken at home, exemplifying the increasing potential of a decentred workspace.

In this context, it is interesting to look at someone who took an inverse trajectory, relocating from a large city with a reputation for artistic excellence to a regional locale. The composer Hellgart Mahler is such a figure. Her trajectory from Vienna to England to northern Tasmania interests me in light of its socio-political complexities.

An online search for Hellgart Mahler's music reveals very few results, with most circling back to her Australian Music Centre profile. This small number of results is only further obscured by the countless results relating to her great-uncle Gustav. To find out more about Hellgart and her music, I made the six-hour round trip to visit her at her house in limilinaturi/Devonport on the northern coast of Tasmania.

Divertimento, performed by Philip Nicholas in 1997.

Born in Vienna in 1931, Hellgart and her family fled to England only months before the beginning of the Second World War. Though a 'promising musician' in England, as a German-speaking Jewish woman in the years during and following the war, Hellgart was not afforded the privilege that I, for example, experienced as a 'promising musician' in England some 60 years later. As an economic refugee in the UK, she had trouble receiving private music tuition whilst having to move around a lot.

After their marriage, Hellgart and her husband Robert wanted to travel overseas, but due to the immigration policies of the Menzies government, Australia did not initially seem like a possible destination. However, following the slow dismantling of the White Australia Policy, in the early 1970s, Robert lined up a job as a shunter on the Tasmanian railway. The position included the ownership of a house, the possibility of which Hellgart described as being 'unthinkable' for them in Europe, and so they decided to relocate to Devonport where she has remained since.

What struck me about my discussions with Hellgart was that, despite Devonport being a far cry from the arts hubs of Europe, she wasn't bothered by how the move could have affected her composing. She explained to me that, although receiving sporadic music tuition in Vienna and England, she considers herself an autodidact by necessity, saying, 'I had to discover everything for myself.' She spoke of the role that gender has had on this necessity as well as her music not being entirely welcomed in either Europe or Tasmania (exemplified by a time when she was refused a performance in Hobart due to supposedly not 'coming up through the right system'), and her distrust towards tokenism of her work. We discussed having to overcome the barrier of working outside traditionally permissible aesthetics after having already wrestled with the additional barrier that can be put in front of marginalised artists, which is particularly true in regional and remote areas.

Despite this, in Tasmania Hellgart managed to find several like-minded supporters of her work. Notably, having supposedly just 'escaped' the pressures of Sydney, the composer Ian Cugley arrived in Tasmania only a few years before Hellgart and the two were greatly supportive of each other. In this respect, Ian and Hellgart were kindred spirits, seeing the weight of reputation and tradition in the epicentres of Europe and Australia as a potential inhibiter on the creation of music less shaped by established aesthetic tribes-a feeling shared by many regional artists. As Hellgart states on her Australian Music Centre profile, 'Tasmania had such a liberating effect on me that it is here that I really became myself!' 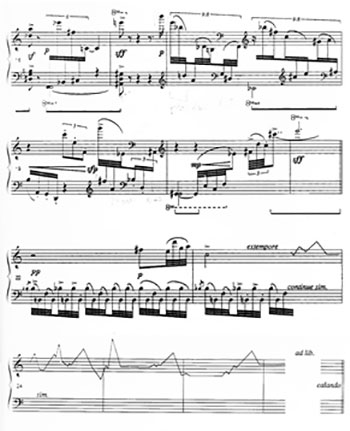 Possibly due to being largely self-taught or composing away from the weight of external influence, Hellgart resisted most of my attempts to define her music in established terms. Described by the composer only as 'serious' and 'avant-garde', it is the kind of music where the instructions will suddenly shift from a precisely explained passage of traditional Western notation, to one of a graphic and interpretive kind, to a moment of open improvisation, as in this excerpt from her piano work Photons (1988).

Similarly, in her solo trumpet work Glasscapes (1976), Hellgart asks for the live looping of the musical material in performance, which may be the first notated use of this technique in Tasmania. Another reoccurring feature of Hellgart's work is references to astronomy, beginning with Three Galactic Fragments (1966) - composed towards the height of the Cold War Space Race. About this interest that only grew once in Tasmania in the 1970s, she says, 'Tasmania has made me free, so that I can fly into outer space.'

Despite her willingness to discuss her work with me and her curiosity about my own music, Hellgart seems to be a fairly private person. She told me she keeps no photos of herself and at her request I have chosen to not include one in this article. She also stated that her music has no direct musical influences and that her process is decidedly organic, letting the music marinate in the ether before it inevitably changes when rendering it on the page. Hellgart explained that she didn't compose to please other people or to further her career, nor did she consider it a hobby or a pastime.

As a composer living in a relatively small (though growing) community during a time when travel is abnormally restricted, it was encouraging to talk with someone uninterested in the rigid trajectories often expected of serious composers in which she was not accepted. Hellgart may have arrived in Devonport somewhat incidentally and somewhat out of necessity, but she has said unequivocally that it was the best decision she and Robert ever made. Initially, living in Tasmania was also incidental for me but has become a necessity during the pandemic. However, I would like to believe that by foregoing the expected path of a "promising musician", regional artists do not have to compromise the scope or seriousness of their work.

For those interested in knowing more, Hellgart informed me that she is at the tail-end of writing a book which is to be both an autobiography and a collection of music essays and poetry. We are also organising for recordings of some of her music to be uploaded to YouTube in the coming weeks and there are plans in place for upcoming performances of some of Hellgart's works in Hobart, beginning with the aforementioned Glasscapes in December 2021, and the premiere of a previously unreleased flute quintet in the new year.