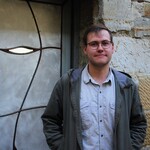 Dominic Flynn was born in Hobart in 1997. In 2020, he received a Bachelor of Music with First Class Honours from the University of Tasmania's Conservatorium of Music where he was the recipient of both the Conservatorium of Music Scholarship and the Estelle Marguerite Taylor Overseas Exchange Scholarship. He has studied in Australia with Don Kay, Russell Gilmour, and Maria Grenfell, and in the United Kingdom with Michael Finnissy.

Dominic's music has been performed both at home and overseas, and he has collaborated with the likes of the Decibel New Music Ensemble, Hobart Wind Symphony, the Conservatoire de Musique de Rimouski's L' Ensemble de Musique Contemporaine, pianist Michael Kieran Harvey, and the Tasmanian Symphony Orchestra.

Dominic's music is often idiomatically symbolic, reflecting the baggage found in various musical precedences. Thusly, it notably pulls influence from numerous musical vernaculars which are filtered through a modern sensibility, and is typically layered, linear, and dense.