AMC's new Associate artist Ross McHenry is a composer, bassist and producer, and winner of the 2019 Art Music Award for Excellence in Jazz. His new album Nothing Remains Unchanged - also featuring North-American colleagues Eric Harland, Ben Wendel and the Australian pianist Matthew Sheens - is just out and available via Bandcamp - this is the essay accompanying the new release.

The image on the front of this album is my daughter running in the rain. It was a random occurrence, one minute the skies above Greenpoint, Brooklyn, were sunny - the next we were caught up in one of the heaviest downpours I've ever experienced. We ducked into a vacant warehouse, off a road close to Battery Park, to get out of the rain. It was completely empty and both sides of the building were open to the street. We sheltered inside for a moment and then, un-prompted, she ran out into the wild rain and I snapped this picture. I was highly conscious of the collective, playful joy we experienced in that moment. It felt almost as if I was watching a film of my own life, like I was a fly on the wall and not an active participant. I could never have anticipated when we left the apartment we were staying in that simply through an act of nature and the actions of my child, I could be so deeply moved. 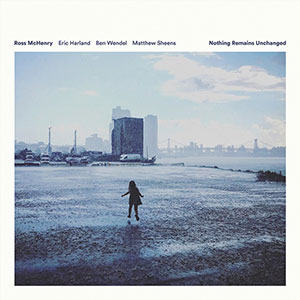 Someone I love dearly once told me that yearning to revisit special places or moments from one's past is a fundamental part of the human condition. In the year since this photo was taken I've thought about this moment many times and wished I could go back to it, all the while knowing that it can never be recreated. It's not the moment itself that I yearn for, it's how I felt in that moment that makes me feel such intense nostalgia. The sense of profound togetherness with my family, combined with a feeling of being completely present in that moment, and the unlikely connection to the natural world in the middle of one of the world's biggest cities through the torrential downpour, were truly extraordinary.

This album was largely written in the Davidson Studio, Leighton Artist Colony at the Banff Centre for the Arts and Creativity. Surrounded by the incredible beauty of Alberta, Canada, I spent a lot of time thinking about my life and that was filtered through the music I wrote while I was there. It was a combination of being intensely present in the current moment while writing and thinking, as well as having the space to reflect.

As my children were also with me on the residency, I thought a lot about my own childhood, the carefree intensity of adolescence, and the fleeting nature of raising your own children. I thought of my childhood family holidays on the Fleurieu Peninsula, the yellow of the dry grass, the white of the sand dunes, the rolling brown hills, the turquoise ocean, and I yearned for the house on Field Street where we spent every summer as kids. I thought about freezing mid-winter teenage parties in someone's parents shed in the Adelaide hills where I would wear my Dad's old coat and hat from when he lived in London, drink beer underage and play rambling jam band music with freezing hands and cold feet.

I thought about my time living in Sweden, and the genuine love I have for the family that I lived with who wholeheartedly embraced me as their own child. I thought about road trips, of falling in love, touring in my twenties, of things I've done I'm not proud of, and, through each of these memories, I found I wasn't remembering events in detail, instead, I was connecting with the way I felt through these memories. As if the emotion of the experience had been distilled over the years into a potent singular entity.

In reflecting on these memories I found that each had the same quality of abstraction that I described earlier - where you feel as if you are a fly on the wall in your own life. And so, not through any real effort on my part, the music I wrote in Banff was a reflection on both the current experience of my life, and the past. I left Banff with a sense that the conflict, between wanting to go back somewhere and accepting that you never can, is important.

There's something about respecting the past, but not trying to relive it, that is critical as an artist as well as citizen, and there's something that's universally relevant about jazz, when it's at its best, for this reason too. It's an art form that celebrates the moment of creation, the moment we're in, whilst also respecting what has come before.

It was a privilege to record this album with true legends of this art form, who brought the music to life through their own experiences and truly made it what it is for you the listener. For me at least accepting that nothing remains unchanged helps me to appreciate and be grateful for what I have, and to remember my responsibility to respect but not to try to relive the past both as an artist and citizen.

I hope you enjoy this music. I hope it means as much to you as it does to me.