O for a Muse of Fire: 30 Australian takes on Shakespeare

A mood, a situation or an emotion, captured in a few lines of poetry some 400 years ago: William Shakespeare's songs, spoken and sung by characters in his plays, together with his 154 sonnets, have provided composers with material ever since. Thirty Shakespeare settings by Australian composers have now been released on CD, thanks to a long-term project by the baritone Michael Halliwell in collaboration with pianist David Miller. O for a Muse of Fire features music by 16 composers, including world premiere recordings of works by Moya Henderson, Chester Schultz, Andrew Ford, Richard Peter Maddox and Peter Sculthorpe.

Anni Heino talked to Michael Halliwell about his search for Shakespeare settings by contemporary composers.

> For CD details and purchases, please visit the AMC Shop. 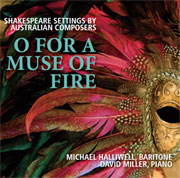 During his career, baritone Michael Halliwell appeared on stage in Shakespeare operas from Falstaff (Verdi) to Romeo and Juliet (Gounod) and Hamlet (Thomas). With a background of studies in literature as well as music, the art of the opera libretto has long been one of his particular interests. But singing words in an opera usually means being at the mercy of librettists and translators, 'twice removed' from the original literary text. For a Shakespeare enthusiast, a song setting is a chance to get a step closer to the Bard. And sometimes a song of three minutes can encapsulate a whole Shakespearean universe as well, or better, than a full-length opera.

'Shakespeare's songs are extremely varied in terms of where they go in plays, and the uses they are put to. What interests me is not just that the words were written by Shakespeare. It is also the idea that a song can capture the essence of emotion in a scene, or the whole play even', Halliwell explains.

His exploration of Shakespeare settings began years ago with an attempt to find songs by Shakespeare's contemporaries. The results were modest, so the search was extended to later composers. The first real discovery was a Haydn setting of 'She never told her love', followed by works by the German Lieder composers, many of whom also set Shakespeare's texts.

The impetus for a whole program of Australian Shakespeare settings, and ultimately the CD O for a Muse of Fire, came from a concert program at the Conservatorium of Sydney. In this concert, Halliwell traced Shakespeare's life and work through excerpts of plays and a wide range of song settings. The songs by Alfred and Mirrie Hill, included on the CD, were part of that program. More Australian composer names and settings were unearthed for a recital in Dunedin, New Zealand, organised by the Australian and New Zealand Shakespeare Association. The next logical step was an all-Australian concert in Sydney which took place in May 2012.

By this time Halliwell had already ended up with material for two CDs or more, and plans for a recording were taking shape. Then came a phone call from Moya Henderson, who offered to rework recent songs composed for a stage production of The Winter's Tale. These songs became one of the highlights of the project.

"She sent the music through and they were just terrific. I really liked these songs and their quirky humour and felt they would add a different theatrical element to the whole program, a whole different colour."

On the CD, Henderson's three songs joined the company of two other sets of three: Andrew Ford's Three Shakespeare songs, and Peter Sculthorpe's three early songs, all recorded for the first time. Ford's songs were written over a few years in 2006-2009 and were first performed by female voices (Yvonne Kenny and Margaret Schindler), whereas Sculthorpe's three songs were entered by the young composer in a Victorian School Music Association's competition in 1948.

Other first recordings on O for a Muse of Fire include two songs by Chester Schultz, 'Blow blow' and 'Full Fathom Five' (Ariel's Song) - the latter composed in the 1970s, and, according to Schultz, partly born out of unresolved grief for the loss of composer's own father. Halliwell took the music to David Miller and was instantly convinced.

"I didn't know Chester Schultz's music beforehand and had come across it researching material at the AMC. And when David and I started to work on Full Fathom Five, I said, 'My God, this is a big, big song. It's quite orchestral, and the end with its tolling bells... I find this music quite hard to categorise but extremely interesting."

One of the singer's regrets about the CD is that it wasn't possible to fit in Richard Peter Maddox's song cycle Beauty Herself is Black in its entirety. A sonnet setting 'My Mistress' Eyes' made the selection.

'We had recorded two of the songs but in the end we only had room for one. It's a fascinating cycle in a very original style: the four sonnets that Maddox has chosen for the text are loosely all about the same theme, description of beauty - Shakespeare really problematised the whole concept - and I'd love to have included the whole cycle', he says.

O for a Muse of Fire also covers a lot of historical ground, with settings by Frederick Septimus Kelly (a grand, romantic setting of the arguably most famous of sonnets 'Shall I compare thee to a summer's day') and virtually unknown early Australian composers Marion Alsop and Helena Miller, as well as songs by Percy Grainger, Henry Handel Richardson and Fritz Hart. Those are followed by Mirrie and Alfred Hill's and Margaret Sutherland's songs, and four settings by Dorian le Gallienne.

The recital concludes with an 'encore', three songs by Brisbane-based Robert Keane, in a clear departure from the style of the rest of the CD.

'I had found a reference to these songs in the National Library, with a link to the composer's website, so I wrote to him and ordered the music. These songs were actually written for stage, and I have a feeling that they probably needed a slightly more 'pop' approach - but David and I took them as we found them so the approach is a little bit more classical here', Halliwell says.

As Associate Professor of the Sydney Conservatorium of Music, Michael Halliwell regularly meets with young singers researching repertoire. How does he think these songs would work for other voice types, or female voices?

'I'll be quite frank here, quite a few of them were transposed down or up for me to sing, and some of them were written for different voice types and I kind of appropriated them - which is fair enough in art song repertoire, people do that all the time. So yes, certainly they would work for other voices, female or male. And when it comes to the song texts, it's a persona that one takes on, whether it is a male singer or a female singer, it really doesn't matter. And from a technical point of view, some are fairly straightforward, some are quite challenging, and some have quite tricky musical demands, which also makes them interesting to perform, and a nice challenge. And then there is of course the theatrical challenge.'

After his extensive survey of Shakespeare settings, Halliwell finds those by Australian composers perhaps less reverent, less intimidated by the shadow of Shakespeare, and certainly as original as any settings by English composers he has come across.

'This music is something original, it's a contemporary take on Shakespeare. I see it as an analogy of adapting Shakespeare for stage, putting a play in a contemporary setting, which every theatre does now. It is very hard to play Shakespeare in some kind of authentic setting, you just can't do it. The composer's work is in a way an equivalent of this, they are able to use their own idiom. And Shakespeare's song texts are such a gift to a composer - the sonnets are perhaps more problematic, but Australian composers have really taken on that challenge.'

Musing on the Muse

I just love the winning combination of baritone Michael Halliwell and pianist David Miller. A few years ago I had the pleasure of reviewing When the Empire Calls so was delighted to have the chance of commenting on this new release by the duo.

Shakespeare's plays, songs and sonnets contain a wealth of inspiration for the composers' imagination and there is a long tradition of setting them to music.The clear intonation and rich sound of Michael Halliwell's ringing baritone is admirably suited to these settings and he brings a wealth of musicological knowledge to interpreting the words and intentions of the composers. Recorded at the Sydney Con, the Stuart piano - although not my favourite instrument - suitably fulfills its role under the guidance of David Miller arguably the best accompanist in the country.

Highly recommended for both teacher and music lover.