Andrew Ford has learnt that, in a simple song, 'there's nowhere for a composer to hide'. He writes about his new series of 'hymns' to texts by Australian poets - and about failing to take his own advice.

I always tell student composers they should have a plan before they start a big project. They can change direction later, but setting off on a long journey with no notion of your destination is seldom a good idea.

I've just failed to take my own advice. I am currently composing music without quite knowing what I'm doing or why I'm doing it, let alone where I'm headed. I'm writing hymns. Well, sort of.

The poet Les Murray once said in an interview on The Music Show that he hoped, before he died, to write 'a good hymn'. I don't know if he achieved this, though I suppose, since all his books were dedicated 'to the glory of God', you could argue his entire life's work was one big hymn. But his remark stayed with me and left me wondering about the nature of hymns.

Though a non-believer myself, I attended a state school in the UK that received a substantial amount of top-up money from the Church of England. It paid for things like a swimming pool and language laboratories, but the price to the students was two religious assemblies a day. So I sang a lot of hymns between the ages of 11 and 18, and sang them with gusto. In the main they were strong, powerful, well-made songs, with tunes by the likes of Parry, Holst, Vaughan Williams and John Ireland (all themselves non-believers), and words by some of the great poet-theologians, such as Isaac Watts, Charles Wesley, John Henry Newman and G.K. Chesterton. 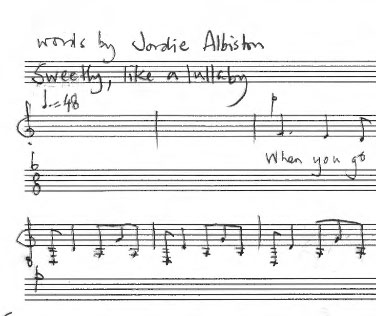 View an extract of 'Gone' by Ford & Albiston.
Listen to Gian Slater's version on Soundcloud.

Not that hymns are exclusively Christian or, for that matter, religious. There are plenty of pre-Christian hymns, and plenty that are secular. I've always thought of Neil Young's 'Helpless' as a sort of hymn - a song about being awestruck in the presence of nature. And Paul Kelly has written a lot of songs that might be thought of as hymns - many of them also to nature.

Recently, I've revived an old idea that I've called Red Dirt Hymns. A few years ago, it came to nothing, but it seems to have found its time. Simple songs - simple to sing, not simple to write - that may yet add up to something larger as a pattern emerges.

I've commissioned some of Australia's best poets, asking that they write me lyrics about the sorts of things that hymns are about - praise, awe, struggle, acceptance, love, hope and forgiveness; that the lyrics be strophic, with a strong sense of metre and the odd rhyme. And they're coming in, so far from Jordie Albiston, John Kinsella and David McCooey, with promises from a dozen more. I'm offering the poets what a literary magazine might pay, which isn't much, but then I've yet to work out how I'm going to pay myself. (I was looking at Patreon, but that seems to be mainly for performers - singer-songwriters and so forth. Like most composers, I'm being forced to reinvent myself a little, but singing might be a bridge too far!)

Putting Jordie, John and David's words to music has been challenging. I've written plenty of songs and song cycles in my time, but they've mostly been of the 'art song' variety - literary texts put to 'literary' music, and intended for classically trained, professional singers. Wide intervals? Extended tessituras? Tricky rhythms? No problem. But this time I don't have a specific singer in mind and I'm hoping the songs may be sung by non-classical and untrained voices - maybe even unison choirs. So these songs are more direct than most of my others, with narrower vocal ranges and (I hope) memorable tunes. The accompaniments are also direct. I've written a guitar part for Jordie's song, 'Gone', indicating that it might also work well on a plucked bass or bass clarinet.

For all these reasons they're turning out to be quite hard to compose. There's nowhere for a composer to hide. I must find the right notes in the hope they come to seem inseparable from the words they convey.

Benjamin Britten said he wanted his music to be 'useful, and to the living'. I want these songs to be useful. Perhaps I'll make some of them into a cycle; perhaps I'll turn them into four-part choruses; perhaps I'll hand them over to some of my improvising friends to see what happens (this was part of my original plan). So far, I've sent Jordie's 'Gone' to a few classical singers, a jazz singer and a folk singer, a guitarist, a double bass player and a bass clarinettist. Who knows what will come of it? Perhaps it'll turn up in a concert or a school assembly or at an open-mic night near you. Perhaps you'll sing it yourself.

Send me a message if you'd like a copy of 'Gone' or would like to commission another song for a particular voice or instrument or occasion. Meanwhile, I'll continue to write them, sending them off, unsolicited, to the singers in my address book.

Good luck with that!

"Meanwhile, I'll continue to write them, sending them off, unsolicited, to the singers in my address book." In my experience, which was also Martin's experience, people receiving unsolicited material hardly ever acknowledge receipt, probably never look at it, and certainly never perform it. So I wish you well with your project!

So far so good

Peter, my experience so far has been positive. I think I've heard back from everyone. I'm sending them to friends, mind you.