After the publication of the following reflections, Troy Russell captured the atmosphere fittingly in this paragraph: Down by the riverside, in the tranquillity of the fish traps, music was played. Everyone was taken in some form or another, as the children stopped to listen and the elders bent their ears, a smile and a knowing look to each other reminded them of their day at the river. I watched young children play down by the weir, building their own memories, as my pieces were performed. The view was fitting. One boy ran the whole length of the weir easily, and the musical passages kept up with him as he slipped and skidded and splashed as he ran along.

The following texts by Claire Edwardes, Jason Noble, Freya Shack-Arnott and Lamorna Nightingale were written for and originally published on the Ensemble Offspring website.

Performing Troy Russell's work River Life in front of the ancient fish traps where the Barwon River meets the Darling was something which none of us 'Offspringers' will ever forget.

There is something about driving 9.5 hours inland which leads to a great deal of reflection - both throughout the (extremely long) car journey but also on arrival. The local First Nations people speak of the land with a huge amount of reverence and that is something that we felt with great resonance and depth during our brief time in Brewarinna. That the land tells us things, that we must respect the land, that rites on the land such as this festival (organised by the amazing people at Moogahlin Performing Arts), bring people and tribes together and strengthen relationships. 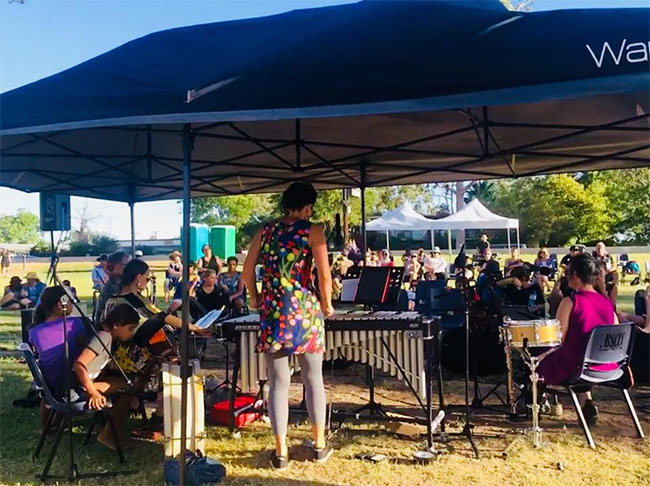 So, as part of this year Baiame's Ngunnhu Festival, Ensemble Offspring was a guest on that sacred land. We met the local children, talked to elders, hung out with cultural leaders from the city who had also made the huge trek to be there (including ICI mentors Chris Sainsbury and Kim Cunio), heard the legendary writer Bruce Pascoe talk about his views on the land, global warming, overpopulation and more - and learnt just a little bit more about Aboriginal traditions, history and culture (as well as harrowing stories about the missions and a local genocide) through a Fish Traps Tour with Brad.

So there it was - our short but intense experience of River Life. I want to return to Brewarinna. It's a journey I think all us city-dwellers should make at least once. For me, it was a reminder of all the reasons why Indigenous Australian culture must be hugely respected, fostered and fought for. The Indigenous Composer Initiative is just one small step towards this and performing the works of Troy Russell, Tim Gray, Rhyan Clapham, Brenda Gifford and Elizabeth Sheppard in Brewarinna was certainly one of those life-changing moments where the messages in the music had a deep impact on all in attendance - not least, us, the performers. 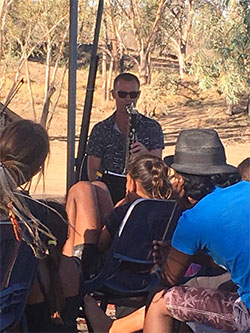 Jason Noble with his engaged audience.

Ensemble Offspring just spent an epic weekend as part of Baiame's Ngunnhu Festival in Brewarrina, run by Moogahlin Performing Arts. Around 774km northwest of Sydney, the town of Brewarrina sits right on a curve in the Barwon River, and the locals consider the fish traps (Ngunnhu) to be the oldest man-made structure in the world. According to legend, the ancestral figure Baiame cast a net across the river, creating the Ngunnhu, and the site has been a meeting place for Indigenous peoples ever since.

So what was Ensemble Offspring doing at the Festival? We were there to perform works as part of the inaugural Indigenous Composer Initiative. This project involves Ensemble Offspring performing the works of five Indigenous composers: Brenda Gifford, Rhyan Clapham, Elizabeth Sheppard, Troy Russell and Tim Gray. The works are incredibly varied, but all seem to reflect on a sense of place and belonging. It was especially fitting to be sitting back and hearing the rest of the group performing Troy Russell's River Life (Troy was also part of the production team of the festival), the group positioned metres away from the Barwon River, as dusk approached, with the sounds of galahs and children playing in the background.

We had performed this gig last year at Eora College in Redfern, but the music seemed more potent and meaningful at this festival. Perhaps it was the inquisitive nature of all the kids, who came up and sat right next to us as we warmed up and did a sound check. A couple even offered to be my page turner, as the wind was so gusty. Speaking of which, I certainly took in a mouthful or two of dirt, but managed to keep the flies at bay (hence the sunglasses in the photographs). Perhaps the music itself had a strong sense of connection to the land, and playing outside made this connection more visceral.

Before we performed, I managed to have a good look in the museum, where artwork reflected a lot on the life of the local people. Particularly moving were the videos on the stolen generation, with harrowing accounts of families torn apart. 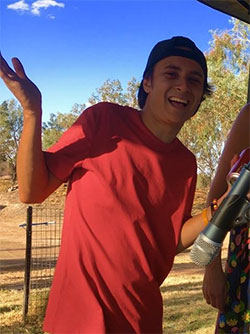 The local kids performed before us, singing and rapping to messages of what life is like in Brewarrina, with lots of smiles, dancing and even some gymnastic moves thrown in. They were ably led by the inspirational Rhyan Clapham, recent recipient of the Peter Sculthorpe Music Fellowship.

And to top the day off, a Chinese dinner at the local RSL, which took me right back to Chinese restaurants of my childhood. Managed to fit in a game of pool and a couple of hours sleep at the Brewarrina Pub, before having to make a treacherous drive alone at 4:30am to Dubbo Airport, narrowly evading hundreds of roos along the highway. While I won't be making that pre-dawn drive again anytime soon, I certainly look forward to revisiting both this festival and the township of Brewarrina.

What a weekend! A road-trip out to the small town called Brewarrina in North-West NSW was a meaningful reminder of not only the beauty of the country we live in, but of the incredibly powerful ancient cultures of the Indigenous peoples of Australia.

After overnighting in Dubbo Friday night, the next four hours to Brewarrina took us out into the red desert landscape, among the emus, kangaroos and occasional families of goats, getting excited when a car would pass and remind us that we really aren't that far from Sydney after all!

Upon arriving at the Hotel Brewarrina and wandering down to the festival by the Barwon River, we saw a large group of kids from a wide range of communities, performing rap music, dancing and circus, led by the energetic and inspiring young mentor, Rhyan Clapham (also one of the composer's of the ICI project we were going to perform later that afternoon). 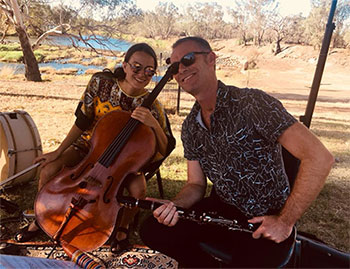 After performing our concert surrounded by Indigenous kids, with no-one taking too much notice of the intense wind blowing red sand into our faces and flies going up our noses whilst playing (poor Lamorna!), we had a refreshing beer and dinner at the part RSL/part Chinese restaurant (never experienced this combination before, but apparently it's the place to be in Brewarrina!).

The weekend was topped off by a tour of the fish traps the following day, learning about the ancient fishing structure built into the river, which has been a meeting place for eight different tribes ever since they built it together over 40,000 years ago! Estimated to be the oldest man-made structures on earth! Wow.

Very inspired to see and learn more of Australia.

Just made it home from the massive road trip to Brewarrina and had a little look on google maps to work out where exactly it was that we went! I've never driven out into regional NSW beyond Bathurst/Orange and didn't really have a sense of what direction we had actually taken! Were we getting close to Uluru? Turns out, no! Brewarrina is on the Barwon River and marks the beginning of the Darling River - it's right up on the border of Queensland and is on the edge of Cubby's Station where they grow cotton (it's been in the media quite a bit recently).

The banks of the Barwon River at 'Bre' has a long, long history of being a meeting place for many Aboriginal communities. In fact these communities apparently all came together to create the amazing fish traps that were being celebrated at the festival. Really worth checking out the history of the area and the research Bruce Pascoe has done into evidence surrounding Aboriginal peoples' cultivation of the land.

The real highlight of being involved in this festival was seeing how engaged the kids were with all the cultural activities. They clearly loved Rhyan Clapham to bits - Ryan composed a fantastic piece for us to play but was also up there running rap classes, playing in bands and spreading his good vibes around! The kids were really interested in our instruments and music, hanging around later to have a go on the vibraphone and drums! Also great to see them heading off together in groups to jump in the river and do some fishing!

I can't wait to head back to this part of the world and discover more!

Champions of new music, Ensemble Offspring present concerts from seminal chamber music to free improvisation, alongside creating striking interdisciplinary productions. Ensemble Offspring is led by acclaimed percussionist, Claire Edwardes, and features some of Australia’s most innovative performers. The group has toured to locations such as Hong Kong, London and Warsaw, is regularly featured at MONA FOMA, Sydney and Melbourne Festivals, and has a cult following at their Sizzle series at Petersham Bowling Club. Passionate about nurturing the work of emerging, as well as established composers, Ensemble Offspring has premiered more than 200 works over its 22-year history.