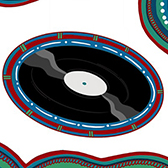 Wikipedia is a go-to online resource for users all around the world to learn about their favourite musicians, discover artists and musical cultures. It's an important platform that is accessible worldwide and is often the top result on any Google search. Furthermore, it allows for links to be made between different topics, enhancing the discoverability of new topics. Yet, we found that many notable living Australian composers were without a Wikipedia entry.

On Friday 18 February 2022, the Australian Music Centre hosted our first ever Wikipedia Edit-a-thon, in partnership with Wikimedia Australia and the Australia Council for the Arts. A Wikipedia Edit-a-thon is an event where multiple participants gather to create or edit entries on Wikipedia with a shared objective. Our objective, encompassing everything that we do, was to represent and promote the work of Australian musicians and sound artists. Our partnership was a part of a larger project, 'The Record', which seeks to increase the visibility of Australian music on Wikipedia across the industry.

Curtailed by the Omicron wave, our event was held online over Zoom with 22 participants, including artists, representatives from Australian music organisations, and AMC staff.

The event opened with introductory remarks from our CEO Catherine Haridy, and keynote speaker Kirsty Rivers, Head of Music at the Australia Council for the Arts, who provided background on the inception of 'The Record' and the role of digital in the distribution and discovery of music. You can watch a recording of their speeches on YouTube.

Participants of the edit-a-thon, many of whom were editing on Wikipedia for the first time, received training from Mike Dickison and guidance from the team at Wikimedia Australia.

As a result of the edit-a-thon, participants collectively achieved the creation of 13 new entries on Australian composers and music organisations, and the expansion of 11 others, with further additions after the event. Keep track of the ongoing outcomes of 'The Project' here.

For the AMC, this is a significant step into further promoting Australian music through digital channels and new discovery channels. We thank the team at Wikimedia Australia and the Australia Council for their partnership and support, and we look forward to continue to work together for another edit-a-thon event in the future.

We encourage anyone with a passion for Australian music to share their knowledge and contribute as an editor on Wikipedia.