Thinking about running and drumming

Drummer Simon Barker has been running barefoot for four years. His running practice has recently become a major influence on his approach to drumming, leading to a new musical project. 'This is the first time that I've had a very clear aesthetic goal that has arisen from a nonmusical activity', he writes. The following article was originally published on Barker's 'Driftwood' blog (named after a solo drumming project + record) where you can read more about his projects, and listen to samples of his music. For more information, collaborative projects and samples, see also Kimnara website.

Lately I've been thinking a lot about running and drumming. If you know me you might think that this is a strange thing to say, as I think about those two things constantly, but this time it's a little different as I've been thinking about running and drumming at the same time in order to see how my drumming can be influenced by an ongoing obsession with long-distance barefoot running.

When running long distances barefoot my focus tends to be on efficiency, form, and trying to get the body moving in a way that is very natural and relaxed. It sounds simple but it's taken a long period of intensive running to feel like I'm in a position to talk clearly about it. About four years ago I was very fortunate to be introduced to barefoot running through an inspiring lesson (and numerous runs since) with Carl Dewhurst, that focused on the development of natural form and sustainable technique.

Barefoot running is a very silent practice as you don't strike the ground so much as caress or sink into the contour of the area in which you step. When running well, there is no audible impact moment so the only noticeable sound is breathing, rustling clothes, and the peripheral sounds around you.

Even though many of the movements are silent, one can still be aware of the feel and duration of several cycles that are generated when running. For instance, legs move in a fairly constant cycle, arms and hands move like pendulums in small relaxed cyclic movements, the heartbeat carries on, and breathing, if relaxed, maintains a fairly even cycle. I say 'fairly' because, if you really concentrate on each cycle, you quickly realise that every repetition of a given cycle is slightly (or very) different to its predecessor. When barefoot running, every step is distinctive as you are negotiating the terrain which, even on a smooth bitumen path, is slightly different for every step. Likewise, every breath is slightly/very different in length or intensity, as are all other movements. 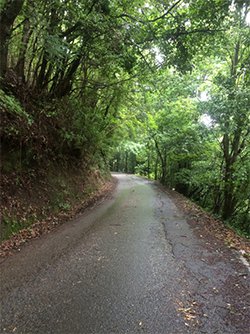 'When barefoot running, every step is distinctive
as you are negotiating the terrain...'
© Simon Barker

I've also found barefoot running to be a deeply meditative practice. With such a clear focus on efficiency, sustainable form, relaxed body/breathing, and zero impact, the mind is free to wander and process. Time seems to pass at different rates and most of the clear thinking seems to be subconscious whilst moment to moment awareness shifts from one feeling to the next. There is also a deeply pleasurable step by step feedback sensation with every barefoot step that is reminiscent of playing in puddles as a kid (as well as those wonderful endorphin hits that come now and again). This kind of meditative running rarely has any fast heart rate peaks so is a fairly peaceful experience (however, there are very intense emotions that pop up when running very long distances but they are not so much energy peaks, more like deep dark times of self-questioning). I have a full-time job and I find that if I run to work and back each day my mind is able to process the day in a kind of semi-conscious sorting process that I find hugely beneficial.

When imagining this collection of seemingly repetitious movements layered upon each other we end up with an interesting phasing and layering of different length cycles that offer unique combinations of events with every step.

So, I was wondering how to play the drums in a way that responds to this feeling of layered, slightly mutated repetition and a meditative wandering mind, and I was amazed at how clearly these feelings conjured sounds and rhythmic ideas. The idea began with working on a form of micro-timing which sees every repetition of a simple cycle land in a slightly different location within the pulse. Over time, a process evolved to manage these locations and I found a very clear connection between mutating repetitions and the kinds of feelings I experience when running. Also, when developing ideas that featured repetitious overlapping cycles, it was immediately obvious when, for example thinking about brush strokes and breathing, a cycle was too quick in its decay as I've had thousands of hours hearing myself breathe whilst running.

I think this is the first time that I've had a very clear aesthetic goal that has arisen from a nonmusical activity, and also one which is produced mainly from collections of rhythms and feelings that respond to physical motions and breath lengths. Since I first began playing music, I've been guided by aesthetic parameters and processes developed by others. Not so much stylistic parameters over the last decade, but aesthetics that inform how one creates tension and release with rhythm, the balance between high and low sounds, or processes that lead to certain kinds of rhythmic outcomes. Of course, over the years I've developed a large collection of my own processes and rhythmic language, but most of the time the source material is cobbled together from various points of musical interest and influence.

I've spent a lot of time studying with musicians here in Australia, with traditional artists in Korea, jazz musicians in New York, and a variety of shakuhachi teachers. All of these wonderful experiences have greatly shaped the way I think about ways of learning, ways of making and thinking about music, process as a tool for development, and looking to traditional forms as a means of finding core knowledge that can be unlocked from its context, mashed up, and re-imagined using aesthetic parameter, alternative process, and malleable core materials. So this is the first project where I feel that I can turn to my experiences as a runner for answers to musical questions.

If anyone out there is working on a similar idea, please get in touch as I'd love to hear your music. My current project, with a new recording due in about three months, is about running, not for running, and represents a very personal attempt to respond to feelings experienced during long barefoot runs.

If any of you are runners who listen to music whilst running, I highly recommend turning off the music and listening to the sound you make whilst running. It's a very clear way to learn about form as your technique can be shaped by a desire to land on the ground with as little impact as possible so as to produce no sound at all.

(By the way, I'm so excited to have gained entry into the Lake Saroma 100k in Hokkaido, Japan. I've dreamt about running in Saroma since reading Murakami's wonderful book What I Think About When I Think About Running. If anyone reading this happens to be running the Saroma 100k this year please get in touch…)

Simon Barker is a Sydney-based drummer. In addition to solo projects and recordings, he is involved in many collaborative ensembles including Showa 44 (with guitarist Carl Dewhurst), Band of Five Names (with trumpeter Phil Slater, pianist Matt McMahon, and Carl Dewhurst), Chiri (with vocalist Bae il Dong and trumpeter Scott Tinkler) and Trace Sphere (with Bae Il Dong, Carl Dewhurst, Phil Slater, Matt McMahon, and Riley Lee). You can find out more about Barker and his projects on his Driftwood website and Kimnara website.