Writing for a superb instrument

In the last few years, one of the most important projects I have been involved in was a work for the Paetzold contrabass recorder entitled Superb Imposition. It was written for Anna Petrini with support from Kulturkontakt Nord (Sweden) in 2010, and revised slightly in the following year in the course of Anna's preparations of the work for the premiere. This year, in September, Superb Imposition found itself on Anna's solo CD released by the Swedish label dB Productions alongside works by Fausto Romitelli, Malin Bång, Oscar Bianchi, and Mattias Petersson.

Composing the work was a long process, but very interesting and absorbing, especially as I had not written for the instrument before. It all began in a Stockholm cafe on a cool spring day in 2009, when Anna and I met to talk about the instrument and the possibility of working together. Although I had wanted to write for the Paetzold for some time, first I had to learn how the instrument works, and this is where Anna's contribution was very significant. Over a period of a few months, we developed an email correspondence, with Anna sending through sound samples as well; all this helped me to understand the Paetzold's properties and how they can be used to obtain various sound types. 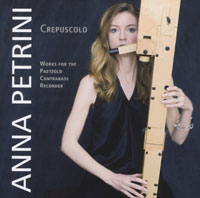 The first thing that struck me about the Paetzold was the amazing elasticity of its sound, as the instrument is greatly responsive to various actions applied to it, with even the most subtle modifications in things like air-pressure, or the hand position over the labium making a clearly perceptible impact on the sound quality. This general feature of the instrument made it very appealing to me, as in my composing I work with the physicality of sound production as the means of generating the musical material. In other words, I don't think about systemised organisation of abstract parameters (pitch, rhythm, etc.), but instead I compose through thinking about specific operations that the performer applies to the instrument. Furthermore, what is for me most fascinating in composing for the Paetzold is the possibility of combining various actions, and this became the essential idea behind Superb Imposition: a superimposition of actions in varied combinations.

In the end, the most exciting aspect of writing the work involved generating superimpositions and articulations of various actions based on what I imagined the sounding result would be, and gradually seeing the overall process of the work being formed by the sounds, as well as the interactions, musical situations and contexts they created. It seemed like I was pulling the instrument apart in order to put it back together.

In selecting various actions to combine, isolate, emphasise, distort, etc. I often tried to look for some kind of 'imperfection' in the instrument's properties in the hope that sound objects of fresh and intriguing qualities could be discovered. For example, using lower dynamics on high fingerings is 'incorrect', as the high notes will not be obtained - instead, the sound seems to travel across the register in unpredictable ways, especially when combined with stopping and opening of the labium. Quite a few other technical examples could be given, but for the purpose of this article it suffices to say that completing the piece left me with the impression that there is a lot hidden in this instrument, and it will take more than one piece to uncover it.

Completing the score was not the end of the process - the next stage was the premiere. Anna was invited to the 2011 Musica Electronica Nova festival in Wroclaw, Poland, and this created the opportunity for finalising the score. Even though there were no significant revisions involved, it was a vital stage of the project, as many details were fine-tuned.

On Anna's CD, Superb Imposition is one of three new works that she commissioned as part of her Paetzold project - the other two are Malin Bång's Split Rudder and Mattias Petersson's Sinew0od; in addition, there are two previously existing works: the classic Seascape by Fausto Romitelli and Oscar Bianchi's Crepuscolo (from which the CD takes its title). All the works represent strikingly different approaches to the instrument, coupled with various ways of using amplification and electronics.

In the CD booklet, Anna offers the following comments: 'Collaborating with composers has been a comprehensive and inspiring part of the process of making this disc. Seeing the instrument through the eyes of the composer makes it constantly new, since different minds put different light on different aspects when writing for the instrument. The opportunity to rediscover the instrument is very refreshing and gives me a feeling that each meeting of this kind adds a new layer to my instrument.'