Music should connect everyone: the composer, the performers, and the listener should all share the journey together. To help this happen, I write music that combines classical traditions with contemporary music 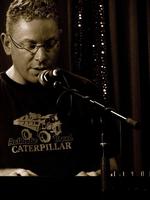 Andrew Batterham is an Australian composer, arranger, songwriter, and performer. He is active across many genres including art music, jazz, corporate music, big bands, TV, and educational music. His music has been performed, recorded and broadcast in Australia, Asia, Europe and the USA, by artists ranging from jazz legend James Morrison to the Melbourne Symphony Orchestra.
After studying composition with Brenton Broadstock, Andrew worked as a trumpet player and pianist in the Melbourne commercial scene for many years. Upon winning the Qantas Youth Award of the Paul Lowin Prize, he travelled to New York to study with Broadway arranger Ian Finkel, and to London for lessons with John McCabe. Other achievements include the Corbould Composition Prize (Queensland Symphony), participation in the Australian Composers Orchestral Forum, commendations in National Songwriting Contest, and commissions from the Melbourne Symphony Orchestra and many other organisations.

Commercially Andrew's music has been heard on TV and radio, in short film scores and corporate events. He has also arranged orchestral backing music for albums by various artists. Recent activity includes Concertino for solo tuba and wind band (winner of the Harvey Phillips Award), premiered by Sérgio Carolino and the Banda Sinfónica Portuguesa at the São João Festival in Portugal; residencies at the Sydney International Brass Festival and the Gravissimo festival, Portugal, and CD releases for Tall Poppies and Cala Records (UK). Andrew received ABC Fresh Start Funding for his Trumpet Concerto to be recorded by David Elton and members of the Sydney Symphony Orchestra, and an ANAM Set commission in 2021. His songwriting has been rewarded with an Amex Music Backer's Fund grant to record funk band Speakeasy at Melbourne's iconic Sing Sing studios, and his song Straight Ahead won the Soul and RnB category of the Voyager International Songwriting Competition.