‘Music communicates with all human life. A musical composition should inspire, excite or awaken our inner thoughts and emotions. If I have by one way or another moved a person emotionally while listening to my music, I have done my job’. 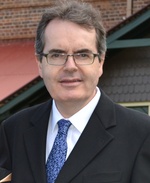 At 19, Greg started his professional music career with the Royal Australian Air Force Operational Command Band at Richmond (Sydney) NSW, as a Tuba player, Trombonist and again sometimes featured as a solo xylophonist. During his 20 years of service, he performed internationally at major Military Tattoos, Jazz Festivals, official Royal and Presidential Vice-Regal engagements, to playing fanfares at Olympic and Commonwealth Games. He also performed as jazz vocalist whilst touring with the RAAF Big Band.

Butcher started composing and arranging early on as a member of the Air Force Band, Sydney. Serving in the band gave him a wide instrumental knowledge (as did his father who was Director of Music-Air Force Central Band in Melbourne), arranging music to suit the Wind Band, Big Band, Brass/Woodwind Groups and Marching Band for public, television, school and official ceremonial performances.

Whilst in the RAAF, he completed a Bachelor's Degree part-time majoring in Ethnomusicology, Musicology and Composition from the University of New England Armidale. He also worked outside the RAAF with many professional and community ensembles ranging from choral groups, theatre shows and TV commercials to the Sydney club circuit, including backing many well-known artists as a member of the Tommy Tycho International Orchestra.

Butcher took up the appointment as inaugural Director of the Clarence Valley Conservatorium in 2003 and started to publish with THORP Music and later with Wirripang Music. Greg's compositions have been played on three other continents.

In 2007 he was made a Fellow of Trinity College London in Music Composition and a Fellow in Composition from the Australian Society of Musicology and Composition. Greg is also a fulltime Audiologist, completing a Master's degree in Audiology from the University of Queensland in 2009, and graduating from Salus University Pennsylvania USA, with a Doctorate in Audiology in 2019.

Butcher has approximately 40 years' experience as a professional musician, entrepreneur and director, establishing numerous community projects. He was presented with an NSW Premiers Award for Service to the Community in 2017, and named a Paul Harris Rotary Fellow in 2018 for services to community music for raising thousands of dollars for local charities as Artistic Director and Conductor with the very popular Clarence Valley Orchestra & Chorus, based in Grafton NSW.

Larger commissions have included many works for New Zealand/Australian National & State Band Championship test pieces, to High School and Community Band works including A Country Meadow for solo cornet/euphonium & piano, with Symphonic Wind Band repertoire such as Music for a Jubilant Occasion, Land of Perpetual Ice, A Centivintennial Overture, Sequential Dances and Australis Ambusti to name a few. Butcher has also written many orchestral works, including a substantial War Requiem Allies of War, for full orchestra & chorus written for the Clarence Valley's ANZAC Centenary Commemorations in 2015.