Music can take your breath away. Render you speechless for a time. That's the kind of experience I strive to create... 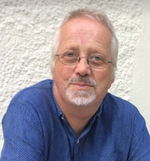 Tim Dargaville's creative practice engages with diversity of experience - seeking the imaginative space where the familiar and the unexpected intertwine. His music is performed, recorded and broadcast nationally and internationally, receiving numerous awards.

Recent compositions explore intercultural experiences in imaginative ways - in particular, the kolam series (2007 - ongoing) connects the composer's direct learning of the South Indian vocal percussion art form of konakkol to the Tamil mandala making tradition of kolam, resulting in a series of interconnected compositions for solo, chamber and orchestral ensembles. Other works take a more personally poetic stance - Lost Pages from the Book of Memory and Forgetting (2017) reimagines the string quartet as a dissolving sonic mandala, providing a container for an expressive remembering of his late mother Rosemary and her disappearance into dementia.

Compositions include work for the concert platform, as well as music and sound design for theatre productions, and have been acclaimed by audiences and critics alike, being described as virtuoso showpieces "loaded with compositional integrity" (Joel Crotty,The Age). International recognition has been received with performances at the Warsaw Autumn Festival (Warsaw, Poland), the Unerhorte Musik series (Berlin, Germany), the East-West Music and Dance Encounter (Bangalore, India), the Wigmore Hall Masters Series (London, UK), and the Rotterdam Bach Festival (Rotterdam, the Netherlands). Recent international premieres have taken place at the 2018 World Saxophone Congress (Zagreb, Croatia) and the 2018 May Residencies (Graz, Austria). In 2018 Tim Dargaville was a special guest presenter and visiting artist at Kunst University's Doctoral School for Artistic Research in Graz, Austria

In Australia, music has been broadcast on ABC national television, featured in the Melbourne and Sydney International Festivals, awarded the prestigious Albert Maggs award, the Jean Bogan prize and an Ian Potter Music Commission. Compositions have also been nominated for both Sounds Australian and Green Room Awards for best new work. In 2017 a composer portrait concert titled "Speaking in Tongues" was held at the Salon at the Melbourne Recital Centre, and broadcast nationally on ABC FM. In 2019 a Bundanon Trust/APRA AMCOS Prelude Composer Residency provided time and space to further research and create The Book of Memory and Forgetting for period chamber ensemble Ironwood.

Also a highly regarded music educator with a longstanding career in tertiary and secondary education, Tim Dargaville currently teaches at the Melbourne Conservatorium of Music, University of Melbourne, having also completed a PhD in music composition there. He also works with young composers through the Education Department, and has previously taught in the faculties of the Sir Zelman Cowen School of Music, Monash University, the Victorian College of the Arts, and the Music Department of La Trobe University, amongst other educational environments.

- Video: After and before, by Tim Dargaville