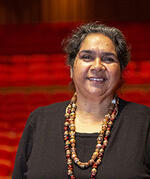 Brenda Gifford is a Yuin woman, originally from Wreck Bay on the South Coast of NSW. A contemporary classical composer and classically trained saxophonist and pianist, she has twenty years of extensive experience as a musician. A First Nations person, her culture is the basis of her arts practice.

She is currently working on a piece for the Sydney Symphony Orchestra and has been commissioned by the Four Winds Festival, among others.

Her music is available on the ABC Classics label.

Brenda Gifford was a member of the Band Mixed Relations with Bart Willoughby from No Fixed Address. She has toured extensively around Australia and internationally to Native American communities and the Pacific Islands. She worked with Kev Carmody, on his album Eulogy (for a black person), playing saxophone on the track 'Blood Red Rose', album/CD/-Festival/D-30692. She wrote the album sleeve notes for the reissued The Loner album by Uncle Vic Simms. One outcome of the program was that Brenda was commissioned to write a composition called Gambambarawaraga ('seasons' in Dhurgha language) for the Canberra International Music Festival. She has also conducted over 100 interviews and oral histories with Aboriginal musicians and has curated notes and blogs.

Brenda Gifford is currently a participant in the Composing Women program at Sydney University, and has studied music at the Australian National University.