I aim to capture an immediacy from my response to the things that give me inspiration in the music I write, often beginning with improvised ideas. Much of my music is inspired on some level by the idea of journey, and often underpinned by a sense of relationship with place. 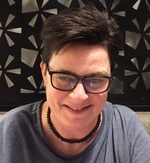 Christina Green was born in Melbourne in 1963. She completed a Bachelor of Music (Hons) degree in musicology at the University of Melbourne and a Master's degree in composition at the same university in 2009, working with teachers Katy Abbott, Julian Yu and Stuart Greenbaum. As an undergraduate she also undertook composition study with Peter Tahourdin, and is currently continuing composition study with Clare Maclean at the University of Western Sydney. Since 1994 Green has worked as a music therapist, after training in the improvisation-based Nordoff-Robbins approach in London, as a performing songwriter/composer, and as a teacher and workshop facilitator.

In the years immediately following her undergraduate studies Green became active as an alto in choirs in Melbourne including the Astra Choir, the choir of St Peter's Eastern Hill and the choir of the Canterbury Fellowship. During this period she wrote and performed incidental music for a theatre production, church music for performance in various contexts in Melbourne, and other choral music, performed by groups at the Faculty of Music, University of Melbourne. Becoming active in Melbourne's acoustic/folk and songwriting scene from 1989 onwards, Green maintains this musical strand alongside composition practice.

Green's output includes music for string orchestra, percussion, organ, winds, piano, guitar, various choral and small instrumental ensembles, as well as many songs for acoustic guitar/ukulele and voice in styles ranging from folk to cabaret, and a selection of songs for use in music therapy. She has been active as a composer/performer with the Brunswick Composing Women's Group and ReGroup in Melbourne's Dandenong Ranges, and has also completed residencies at the Banff Centre (2009) and the Bundanon Trust, NSW (2012), the latter providing the context for composing the Suite from Sighting Silence, Sounding Image for piano (2012-2013), the musical part of a collaboration with visual artist Dr Flossie Peitsch . Green is also active as an improviser across a range of instruments and contexts.

Green has had works performed by a range of ensembles and soloists in Australia, the UK and the US. Recent highlights include first performances of Eileen's Vision (poem by Eileen Myles) for percussionist and spoken word by Kaylie Dunstan at the Sydney Conservatorium (2016), of Stone (poem by Charles Simic) by NYC brass/wind/vocal quartet Loadbang (2016), and of Land, Sea, Sky (2017) for string orchestra by the Penrith Symphony Orchestra, who commissioned the work, in May 2018. In 2015-2016 Green also co-composed No Excuses!, a song suite focusing on women's experiences of family violence, with conductor/composer Kathleen McGuire and the support of Melbourne's School of Hard Knocks. This work was launched by the No Excuses! choir and band conducted by McGuire and led by Green as songwriter/performer, at Footscray's Big West Festival, with further performances including those at the (SOHK) Brisbane International Singers' Festival and Melbourne International Singers' Festival at the Melbourne Recital Centre (2016), and at the Traralgon Sound Shell, LaTrobe Valley (2017).

Green's compositional style incorporates elements of minimalism and other 20th-century idioms, jazz, popular and medieval music. Since 2010 she has enjoyed working on collaborative projects with visual artists and poets, reflecting her long-time interest in these artistic areas.

Green writes: 'I aim to capture an immediacy from my response to the things that give me inspiration in the music I write, often beginning with improvised ideas. I work to craft my material, looking for an integrity and completeness for each piece. Much of my music, both instrumental music and songs, is inspired on some level by the idea of journey, and is often underpinned by a sense of relationship with place. Since 2003, elements of inspiration from Buddhist thought, writings and imagery, from my involvement in Buddhist practice, mostly in the Zen tradition, have become a strand in my work, and more recently, ideas from post-structuralist philosophy. A further strand of my work connects with queer culture/s. My hope is that the connection with moment-to-moment awareness and also with various cultural strands that I cultivate and bring into my work will be conveyed - with space for that to be different for each listener.'