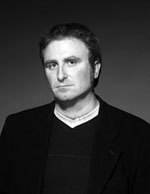 Andrew Harrison is a composer and pianist. His work spans across art music, jazz, theatre and film. A strong interest in history and narrative permeates Harrison's musical output and artistic philosophy, which leading new music exponents in Australia and the United States have performed and championed.

In 2018, the Arcko Symphonic Ensemble commissioned his work If Not In This World to commemorate the centennial anniversary of the World War I armistice. Written using letters from the composer's great-great uncle, Private Leslie Robins and Leslie's mother, If Not In This World received its premiere in Bendigo and Melbourne in November, 2018. In 2016, Harrison collaborated on a new chamber work, Hum, with Detroit-based poet Jamaal May. Commissioned by New Music Detroit, Hum premiered in Detroit in September 2016 as part of 'Strange Beautiful Music IX', the city's annual new music festival.

His composition Gassed Shell (Severe)-commissioned and premiered by Paul Grabowsky and the Monash Art Ensemble in 2014-was recorded and featured on the Monash Art Ensemble CD Histories, released in September 2016 through Jazzhead Records. British-Australian pianist Zubin Kanga commissioned and premiered Harrison's first composition inspired by World War I, The Drumfire Was Incessant, and Continued All Night With Unabated Fury for solo piano, in Melbourne and Sydney in 2012. Kanga's performance was nominated for Performance of the Year at the 2013 AMC/APRA Art Music Awards.

Harrison has also written numerous works for theatre. He was the composer for Melissa Bubnic's 2010 alt-comedy theatre hit Stop.Rewind, produced by Red Stitch Actors Theatre and directed by Anne Browning. Harrison also wrote the dramatic underscore for the Eagle Eyed Productions staging of The Laramie Project in 2005 in Victoria, Australia, as well as incidental music for the company's productions of the stage plays You Can't Take It With You and Breaker Morant.

Andrew Harrison is pianist and a composer for Melbourne jazz quintet Shol, who released their self-titled album through Newmarket Records in 2014. He directs and plays piano in The Andrew Harrison Trio, which is a vehicle for his compositions. He has performed at venues and festivals throughout Australia and the United States with these groups, as well as with other ensembles such as Adrian Sherriff's Wuru Wuru, SPAK!, Spot The Phantom Dog, and the UCSD Improvisation Ensemble, directed by George E. Lewis.

Active as a researcher about music, Harrison has written two book chapters about Australian music and the First World War. These are published in "The Great War and the British Empire: Culture and Society"(2016), and "After The Armistice: Empire, Endgame and Aftermath" (2020), both from Routledge Press. He also contributed articles on Australian jazz to the second edition of The New Grove Dictionary of Jazz, published by Oxford University Press in 2003.

Harrison has taught in the History Department at the University of Melbourne, and was a guest lecturer in Jazz Composition at Monash University, Melbourne. Currently, he teaches composition and music technology at Penleigh and Essendon Grammar School in Melbourne, Victoria.

In early 2020, Harrison completed his PhD, "Sounding Out The Past", at the Australian National University in Canberra, Australia, where he worked with composer Larry Sitsky and historian Paul Pickering. His dissertation was awarded the J. G. Crawford Prize for outstanding postgraduate research. Previously, Harrison graduated with a Masters Degree in Composition at the Australian National University in 1999. He has also studied composition and jazz performance with composer Anthony Davis and trombonist/composer George Lewis at UCSD in San Diego, California.

Drawing equally upon improvisation and conventional notation, Andrew Harrison composes music that is always engaging, challenging and entertaining. He lives in Melbourne with his wife and two sons.