Creating a musical atmosphere that embraces beauty and otherworldliness in an immersive environment. 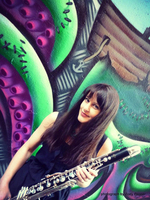 As an instrumental artist, Karen Heath has worked with the Libra Ensemble, Aphids, Orchestra Victoria, Sunwrae Ensemble, the Grand Silent System, Ennis Tola, the Phonos Project, Arcko Symphonic Project, Gemma Turvey and the New Palm Court Orchestra, has performed several times at the Melbourne International Jazz Festival as well as the International Arts Festival, performed and recorded for Lior as well as David MacDonald (the Waifs) and has recorded and performed for film score and numerous other freelance projects. In 2008, Karen performed in Arcko Symphonic Project's performance of Andrew Ford's Learning to Howl, nominated for an APRA award for Best Performance of an Australian Classical Composition in 2009. In 2011, Karen performed Elliot Gyger's 1996 concerto for E-flat clarinet A Wilderness of Mirrors as a soloist with Arcko Symphonic Project. The concerto was recorded by ABC Classic FM and Karen's performance was described by presenter Stephen Adams as 'virtuosic'. In 2014, Karen participated in a tour with the New Palm Court Orchestra, which included venues such as the Sydney Opera House and Melbourne Recital Centre (guest artist was Berklee professor and 4-time Grammy-winner, cellist Eugene Friesen from the USA).

Karen received her Master's degree in music performance on clarinet in 2005, the research for which led her to Europe where she received lessons from Wolfgang Meyer and Suzanne Stephens. In 2005, Karen performed the seminal work by Karlheinz Stockhausen, In Freundschaft, at the annual Stockhausen Course in Kürten, Germany, working with Stockhausen in rehearsal and in performance, and winning the 2nd prize for her performance that year. Returning in 2007, Karen performed again at the Stockhausen Course, playing the heavily choreographed Der Kleine Harlekin, for which she received third prize. As a composer, Karen won the Best Music Award at the 2006 Melbourne Fringe Festival for her 50-minute memorised and choreographed piece Ananke. Also in 2006, she toured regional Australia with the Phonos Project, performing her work Io, along with artist in residence, Swedish composer Henrik Hansson, whose composition Stadium appeared on the same program. Karen has had her works performed in Montreal and Edinburgh (commission from by Piazza Contemporary Collective 2007), Tokyo (2009 and 2012) and Reykjavik (commission from Duo Harpwerk 2009).