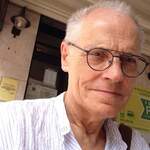 Alan Lawrence was born in 1949 in Hertfordshire. After studying composition (with John Lambert) and guitar at the Royal College of Music, he worked as both performer and composer in various roles but for the most part in the theatre. He worked for a number of companies, including the Old Vic Theatre Company in London and on tour in the UK and internationally. It was with this company that he first came to Australia in 1979. Since then he has written music for a number of Queensland Theatre Company productions including three of the popular Shakespeare in the Park series.

In 1987 Lawrence decided to concentrate entirely on composing. He established a recording studio in central London, writing and producing music for many television productions ranging from current affairs to comedy via the arts. He also composed and produced music for major exhibition spaces in Britain and Europe including the Museum of London and Granada Studios.

In 1997 he closed his studio, deciding to concentrate on music for concert performance. With his wife, the actress Carol Burns, Lawrence returned to Queensland. Since then he has composed a variety of orchestral and chamber works, among these: Divisions for Orchestra (QSO,2000), Encryption II (Duncan Tolmie and Isorhythmos, Brisbane, 2003); Jacques Pasquier rencontre Yvonne Audette ici (Ovid Ensemble, London, 2002); Composition with Eames Chair for solo clarinet (Andrew Harper - Dukes Hall, London, 2006); and Offshore (So-la Voce Chamber Choir - Brisbane, 2009). In 2009 he completed a one-act opera The Hoop of the World with a libretto by David Harsent.

He has composed new pieces for the AMEB percussion syllabus and his Kattrin's Drum, a work for solo percussionist and quadraphonics, received its first performance by David Montgomery, at the Queensland Theatre Company, on 24 November 2014. His chamber work, The Instant Burst of Clamour, was premiered by the Kupka's Piano ensemble on 16 May 2015, and he provided sound and music associated with the Queensland Theatre Company 2015 production of Samuel Beckett's Happy Days, a production which featured the final performance by his wife, Carol, shortly before her untimely death. Since then Lawrence has moved to Rome where he now lives with the translator and academic, Anita Weston.

Lawrence was a 2002 Composer Affiliate of the Queensland Orchestra and has a PhD in composition from the University of Queensland.