'In my music I want to explore and connect with the energies, emotions, textures, colours, sounds, themes and ideas of who I am, as an Australian voice, in this time and place.' 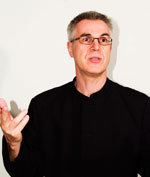 Stephen Leek's distinctive music is arguably the most performed Australian music around the world. Immediately recognisable, capturing the enigmas, drama, rhythms, colours and ethos of Australia, Leek's music is in constant performance by choirs and ensembles across the globe. He has been accredited with having made a significant impact on and a major contribution to the development of Australian choral composition and performance and on how it has been promoted and discussed throughout the world over the past 30 years.

Born in Sydney in 1959, Stephen Leek is an extensively commissioned freelance composer, conductor, educator and publisher. Teaching sessional composition and improvisation at the Queensland Conservatorium, Griffith University until 2009, Leek resigned from this position in order to develop further his already hectic freelance schedule of commissions, workshops and guest appearances and to take up a non-remunerative position on the Board of the International Federation of Choral Music - a project of UNESCO. He is currently a Vice President of the IFCM and the team leader in several important musical projects around the globe.

A pioneer in developing composer residencies here in Australia, Leek's involvement with numerous choral and music groups at every level of accomplishment has had vital influence on recent Australian music.

Having worked extensively at all levels of Australian and international music-making, Leek has devoted much of his time to generating workshops and repertoire that stimulates, excites and challenges the very youngest performers to seasoned professionals, putting performance practises and skills in place to enable all ages and skills levels to interpret, understand and appreciate the unique qualities of his music and other Australian composers.

From 1989 - 1996, with his improvisational vocal group vOiCeArT, Stephen Leek confronted the Australian music world head-on by throwing out wild challenges to the mainstream about the notion and practices of choral singing. In 1993 he was joint founder, and from 1997 - 2009 Artistic Director/Conductor, of The Australian Voices, an elite ensemble of young adult singers who, through their motivated commitment to the work of Australian composers, have significantly challenged and changed the landscape of choral music in Australia and taken Australian music to the most prestigious festivals and events around the globe.

Among Stephen Leek's array of personal accolades is the award in 2003 of the prestigious Robert Edler International Prize for Choral Music. Cited by an international jury for his 'decisive influence' on both the Australian music scene and the international choral community as a composer and conductor, Leek has been admitted into the pantheon of leading choral composers and conductors worldwide alongside conductors Freider Bernius, Karmina Selic, Maria Guinaund and institutions such as the World Youth Choir.

He has won numerous other national and international awards for his music including several Sounds Australian Awards, and in 2004, his work Die dunkle Erde was selected by the Australian Broadcasting Corporation to represent Australia at the UNESCO International Rostrum of Composers in Paris. Most recently, in 2013, his work was awarded the Choral Work of the Year at the national Art Music Awards by APRA and the AMC.

In recent years Leek's activities have expanded more on the international scene where he has been composer in residence at the Marktoberdorf Musik Akademy, Germany; Guest Conductor with the acclaimed Formosa Singers, Taiwan, the Crystal Choir, USA, Composer NOT in Residence with Choral Artists of San Francisco, and, guest conductor with the Singapore Ministry of Education, the Taiwan National Youth Choir, the Crystal Choir in the USA, guest composer at the Sun Music Festival in Riga, Latvia, a juror at the World Choir Games in Austria, and presenter at numerous music, education and choral conferences around the world. In 2012/13 Leek was Artistic Director and Conductor of the Shanghai Youth Choir.

His list of national and international commissions now reads like a list of Who's Who. With his work regularly being performed by choirs and primarily amateur organisations around the world, Leek is arguably one of the most performed, yet largely ignored by the establishment in his own country.

Stephen Leek's Uluru (from Great Southern Spirits) is one of the most compelling, electrifying new choral compositions I have heard. (Mark Gresham, Chorus! USA)

If one were to dream about an ideal way for Australian choral music to truly make its mark, one might:• Firstly, focus on developing a body of choral repertoire that tells the world about the perspective and concerns of our place and our time, and encourage the development of compositional skills that articulate this perspective with clarity and nuance;• Secondly, develop the musical skills and the experience in young singers to articulate and realise this repertoire, giving it a life, with enthusiasm, joy, vigour, clarity, and above all, with the utmost musicality and rigour;• Thirdly, provide the singers with an experience that will significantly impact on their lives, and provide audiences with a rich, meaningful, and above all, entertaining experience;• Fourthly, perform often, at home and away, in a variety of contexts, directly communicating with audiences;• And lastly, continue to motivate, enthuse, excite, stimulate, and challenge, always aiming high, never faltering, and truly setting a benchmark for others to emulate. But wait a minute! This already exists, and has existed for 15 years! In Stephen Leek and The Australian Voices! How blessed are we in this country to claim them as our own? (John Davis - CEO, the Australian Music Centre)