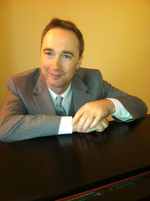 Justin Michael McKay is an Australian composer and performer, whose output includes vocal and chamber music, three operas, orchestral works and many works featuring piano. Born in Narromine, NSW, in 1976, he attended the Sydney Conservatorium High School, and the University of Western Sydney, Nepean. Since 1996, he has been active as a harpsichordist with several Northern California orchestras and ensembles, and has been in high demand as a piano teacher and vocal coach.

His style is at times whimsical, at times rhythmically driving, but above all lyrical.

McKay's works have been heard on radio and television, and in recent years he has been active writing works for the stage. His operas Alice in Wonderland and The Salon were premiered by Chico State Opera Workshop in 2008 and 2009 respectively. A third opera, an adaptation of Shakespeare's The Tempest, was premiered in April 2012. Since then, he has written and conducted incidental music for Much Ado About Nothing and As You Like It.

A new orchestral work, Coiffure, was premiered in October of 2012 by the Veridian Symphony in Northern California.

Recent works include As You Like it (2013), Kyrie for choir and organ (2012), Quartet in G (2013), Variations in D Minor for piano and orchestra (2012), Thirty Canons on Themes from As You Like It for diverse instruments (2013), Seven Fugues for piano (2011), Concerto for harpsichord and strings (2010), Quintet without words (2011), for piano and winds, String Symphony (2011) Coiffure for chamber orchestra (2012), The Tempest (2012). Works in progress include Sonatina for violin and piano, Gloria for choir and organ, a set of canons for piano solo, and a series of piano pieces for children.