...The intellectual challenge may satisfy me on the surface, but when I compose a piece that moves the spirit, whether intellectually charged or not, I am truly satisfied. 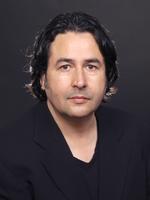 Andrián Pertout was born in Santiago, Chile, 17 October, 1963, and lived in Gorizia, Northern Italy for several years before finally settling in Melbourne, Australia in 1972. In 2007, he completed a Doctor of Philosophy (PhD) degree at the University of Melbourne on Tweddle Trust, Australian Postgraduate and Melbourne Research scholarships, studying composition under the guidance of Brenton Broadstock. He is currently the Vice-President of the Melbourne Composers' League, Australian Delegate of the Asian Composers' League, International Coordinator of the PUENTE Festival Interoceánico (Valparaíso, Chile), and was Honorary Fellow at the Melbourne Conservatorium of Music, University of Melbourne (2008-2015), and President of the Melbourne Composers' League (2009-2013, 2017-2021). As well as being a freelance composer, he additionally works as composition lecturer, teacher, supervisor and examiner at various institutions at Bachelor, Masters and PhD levels. In 2019, he was Visiting Professor at Aichi Prefectural University of the Arts between April and July (Nagakute, Aichi Prefecture, Japan).

As a writer, Pertout has published over 400 articles in music publications such as Mixdown, Spanish Herald, Australian Musician, and the Sunday Herald Sun. His articles range from reviews of new musical technology, compact disc and book releases to interviews with prominent national and international artists, including Herbie Hancock, Steve Reich, Joe Satriani, Rick Wakeman and José Feliciano.

- Video: Aristotle Rhetoric No. 7, Envy and Emulation, Suite for orchestra, by Andrian Pertout