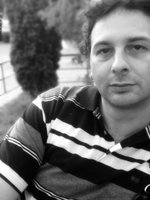 Soni Petrovski was born in Sydney in 1977. He graduated from the UKIM Faculty of Music in Skopje (Republic of Macedonia), in the class of Prof. Goce Kolarovski, and received his Master's degree from the same faculty. He has attended masterclasses with Alexander Radwilovitch, Alexander Schetinsky, Brian Ferneyhough, Pierre Allain Jaffrenou, Kzystof Meyer and Faradj Karaev.

Petrovski currently lives and works in Skopje teaching composition, musical forms and analysis, and counterpoint at the UKIM Faculty of Music. He was artistic director of the International Festival DMM (2003-2006), and founder and artistic director of Alea Contemporary Music Ensemble (1998-2006). In 2012 he has been apointed as President of the Composers Association of Macedonia - SOCOM.

Petrovski was awarded the Panche Peshev composition award by SOCOM for his symphonic suite Zodiac in 2009. In 2006 he was commissioned by the Ministry of Culture of the Republic of Macedonia to compose the opera Leandar & Kosara. He has also composed commercial music for the album Rainbow for Tose Proeski.

In 2011, UK's prominent violinist Peter Sheppard Skaerved stated, 'Petrovski is one of the leaders of new music culture in the Balkans. I have performed his Bric-a-Brac for solo violin all over the world'.