My aim has been to find a poverty of means that is both elemental, broadly expressive and communicative. An ideal musical world for me is one in which to change a single note alters the balance and meaning of a piece. 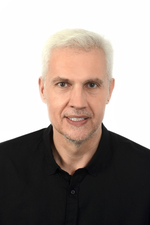 Andrew Schultz was born in Adelaide in 1960 and studied at the Universities of Queensland, Pennsylvania and King's College London. He has been the recipient of many awards in Australia and overseas, including Australia Council Fellowships, Fulbright Award, Commonwealth Scholarship, Paul Lowin Prizes, Schueler Composition Award, Maggs Award, Art Music Awards and the APRA Award.

Schultz has written in most genres including large-scale symphonic and dramatic works. His orchestral music includes three symphonies. Symphony No. 1 In tempore stellae (1998) for the Melbourne Symphony and Chorale; Symphony No. 2 Ghosts of Reason (2008) for the Adelaide Symphony; and, Symphony No 3 Century (2012) was commissioned for the Centenary of Canberra and premiered by the Canberra Symphony for an audience of 150,000. Other orchestral works include The Devil's Music (1992), Diver's Lament (1996) and Sound Lur and Serpent (2014) commissioned by the Sydney Symphony, Falling Man/Dancing Man (2005, Melbourne Symphony), Once upon a time… (2006, Queensland Symphony), Endling (2007) and Peace (2013) commissioned by the Tasmanian Symphony and Maali - Concerto for oboe, clarinet, horn and bassoon (2016, West Australian Symphony Orchestra). The acclaimed symphonic cantata Journey to Horseshoe Bend (2002-03) was commissioned by Symphony Australia for the Sydney Symphony, Philharmonia Choir and the indigenous Ntaria Chorus.

His three operas have been presented live and on film internationally: Black River (1988) was awarded the Australian National Composer Opera Award and the Grand-Prix, Opera Screen at Opéra-Bastille in Paris; Going into Shadows (2000) was commissioned by the Guildhall School of Music, London and the Queensland Conservatorium; The Children's Bach (2007), was premiered by Chamber Made Opera in Melbourne and was recently performed and recorded at the Canberra International Music Festival (2019). Other choral-vocal ensemble works include Ekstasis (1990), Song of Songs (2004), and Wild flower (2006) for The Song Company, Le Molière Imaginaire (2014) for I Fagiolini and Musica Viva, Beach Burial (2009) for Sydney Philharmonia, and Southern Cantata (2017) for St John's Southgate.

Recording releases include four CDs of Schultz's orchestral music for ABC Classics, three volumes of his chamber and chamber-vocal music on the Tall Poppies label, and solo discs of piano music with Antony Gray, chamber-vocal music with Southern Cross Soloists, and vocal ensemble music with The Song Company. Recent releases of his music include Magnificat and Nunc dimittis by the Brisbane Chamber Choir/Morton, August Offensive by the Istanbul State Symphony/Cottis, Falling Man/Dancing Man by the Moravian Philhamonic/Martinek/Vronsky, Century - Symphony No 3 with the TSO/McKeich, This moment must be sung with Halcyon, and Paradise with Felicitas Fuchs, Li-Wei Qin and Bernad Lanskey. Numerous recordings are available for download on digital platforms including performances by WASO, SSO, TSO and QSO.

Schultz has held posts and residencies including as Head of Composition at the Guildhall School of Music and Drama - London, Artist in Residence at the Banff Centre for the Arts - Canada and Cité des Arts - Paris, Professor of Composition at the University of Wollongong and Director of the Symphony Australia TSO Composers' School. He is Emeritus Professor of Music at the University of New South Wales, Sydney and the 2021-22 Gough Whitlam and Malcolm Fraser Professor of Australian Studies at Harvard University.

- Video: Mephisto, by Andrew Schultz (4th and 5th movements only)

- Website: Music and Emotion (incl. performance of "After Nina")
© ABC
What happens when you listen to music? What happens in your brain? What makes music sad, poignant or joyful? How easy is it as a composer to shape and extract emotional responses to particular compositions? In this conversation you’ll hear music and some interesting insights into composition and emotional response with Emma Ayres; Professor Andrew Schultz – composer and head of the school of Arts and the Media at UNSW and Associate Professor Emery Schubert.

- Video: One Sound - quintet for flute and strings, by Andrew Schultz - performance

- Video: Andrew Schultz on setting text: In conversation with...

- Video: Sonata for violin and piano, Movement I: Allegro Agitato

- Video: Andrew Schultz On composition I: Creating the framework - In conversation with...

- Review: The Children's Bach, by Andrew Schultz
© Limelight
Review of performance at the Canberra International Music Festival 11 May 2019

- Review: The Children's Bach, by Andrew Schultz
© The Conversation
Review of performance at the Canberra International Music Festival 11 May 2019

- Video: Andrew Schultz on composition II: Finding your voice - In conversation with...

- Video: Andrew Schultz on Recording - In Conversation With...

- Article: Music and the meaning of water
by Andrew Schultz
Naxos Musicology International (2 May 2020)