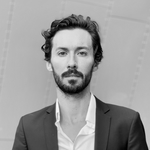 Ade Vincent is a prolific composer with a diverse body of work. His music has been performed in a range of venues, from intimate bars to major music festivals and concert halls, and been heard on television, radio and digital media. His compositional style draws on classical, pop and electronic music, with a focus on blended genres, intricate production and the use of technology as part of the compositional process. ​In 2018 he was the Melbourne Symphony Orchestra's inaugural Young Composer in Residence and worked on three new works for the orchestra as part of the position.

He has received numerous other commissions for new music, including works for the Melbourne Symphony Orchestra, Melbourne Recital Centre, Tinalley String Quartet featuring Lior, and MSO violinist Sarah Curro. His music has been published by Orpheus Music and Lyrebird Press. Ade's work for solo alto recorder called Degraves St finished second in Orpheus Music's worldwide competition for new works for the recorder, and was subsequently published by Orpheus Music.

In 2017 he was awarded the University of Melbourne's Guitar Perspectives Composition Award.

Ade is the driving force behind indie-pop quartet The Tiger & Me. Singer and front-man on-stage, manager off-stage, he is one of the three primary songwriters, writing and arranging much of the band's material. He has produced some of their back catalogue, including critically lauded first album From a Liar to a Thief and their contribution to The Key of Sea project. In 2012 the band signed to ABC Music and released their second album The Drifter's Dawn, produced by Steven Schram. In 2013 they signed with Gaga Publishing. They have performed at major festivals all over Australia and tour regularly. A third album is currently in the making.

Ade released his debut solo album The Raven in 2015: an art/pop song cycle setting of Edgar Allan Poe's poem of the same name.

He has written music for video games, short films and ads. His songs have appeared on ABC's The Time of Our Lives and Channel 7's Winners & Losers. In 2013 he provided music with The Tiger & Me for the trailer for Tim Winton's The Turning.

In 2015 he co-founded Kaleidoscope Audio, an audio company specialising in music and sound for video games.

In addition to engineering and recording much of his own material, Ade has also worked behind the console for other artists. In 2014 he recorded and mixed the self-titled EP by Broads. Hear it here.

He has a Master of Music (Composition) at the University of Melbourne, where he is now studying a PhD with Stuart Greenbaum and Miriama Young. He is also mentored by Brenton Broadstock.